The art of etching arose in the early 1500s in Germany by Italian artisans as means of armour or weapon décor. Currently, these first etchings are on display in the Real Armeria of Madrid. Soon after the earliest etchings were produced, the process of etching shifted to combine with the printing process, which involves the use of acid in order to create the etch lines and edges. One of the major figures known for his work using this type of etching is Rembrandt, who has produced over 300 etchings throughout his lifetime. His collection of etchings surpassed such great detail than any previous etchings that critics thought he had created a new, classified process. However, throughout history, the process of etching has fluctuated over time, with the diminishing of acid and the shift in use various types of material used for etching printers.


Sir Francis Seymour Haden was born on September 16, 1818 in Chelsea district of London. His true profession as he was getting started with etching was being a surgeon of obstetrics. While being a surgeon was his family legacy, one of his greatest hobbies was sketching. Throughout his first trip to Italy in 1843, he kept a sketchbook by his time at all times. Some of his earliest etchings were from sketches he took on his trip. Haden first began etching around 1845, but only entered an “amateur printmaking” stage and didn’t begin taking his work seriously due to a lack of use of true etching medium until about a decade after that. The majority of his work involves landscapes, mastering foliage, water and atmospheric effects. Later in his life, he founded the Royal Society of Painter Etchers, and spread the popularity of the medium to France, England, and the United States. 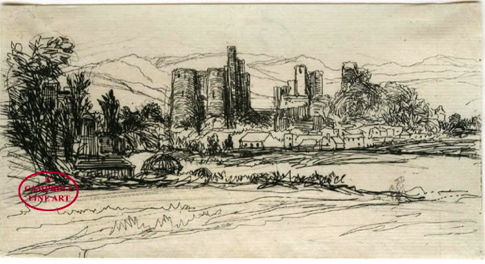 Kidwell Castle, 1859
Kidwell Castle is one of Haden’s earliest “professional” works of art, at which point his work was considered to be less “complete”. His lines were thinner and he left much of the space without any etches at all.  As we’ll see in the other two paintings I post, many of his etchings are from experiences in his earlier life. In the earlier stages of this work, Haden included birds in the sky in his sketches, and the church tower (left) was open at the top. In his final piece, the church tower has been covered and he no longer includes birds. 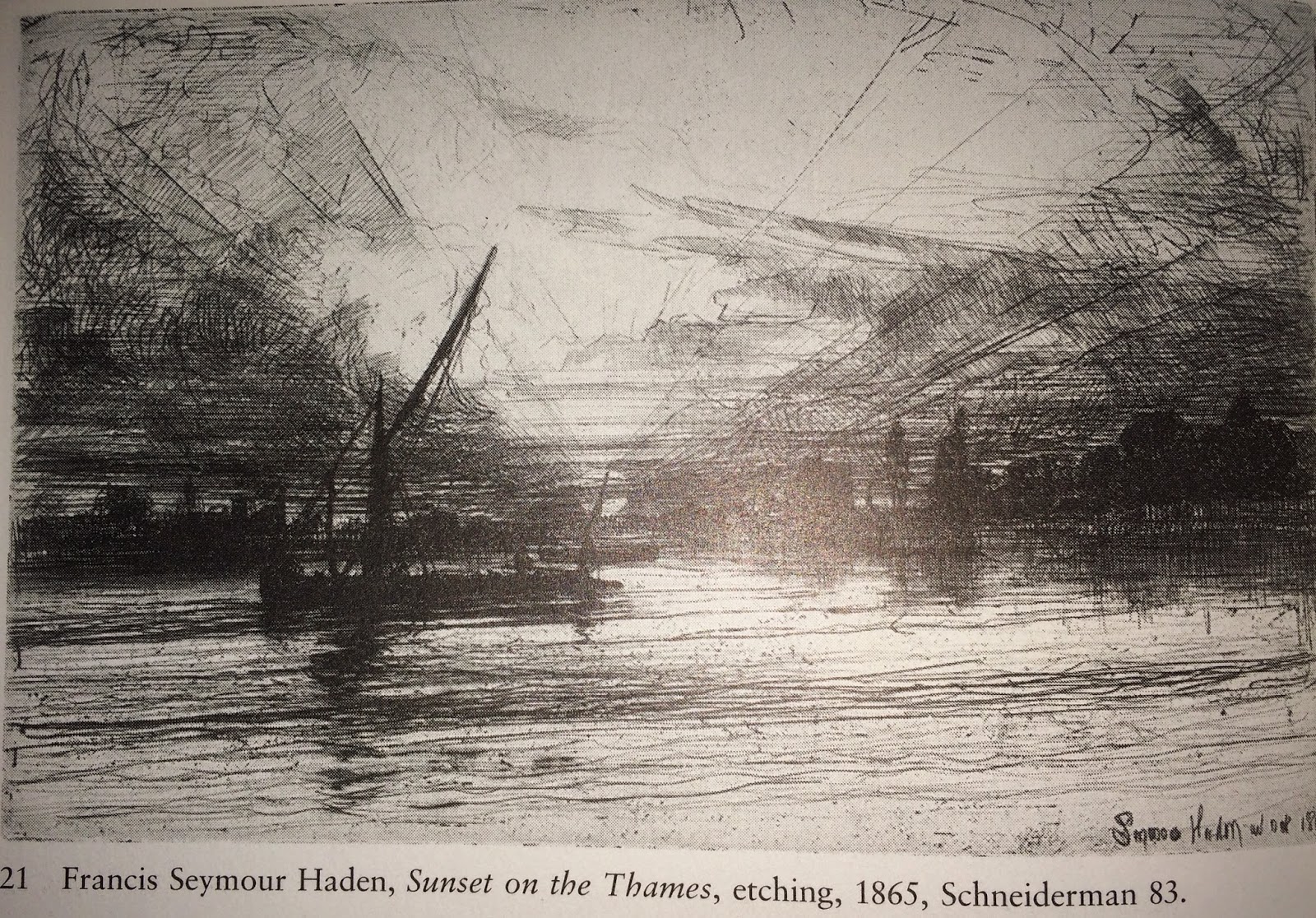 Sunset on the Thames, 1865
Sunset on the Thames represents a piece during the middle of his etching career. This piece was one of his earlier works in the Etudes a L'eaux-fortes, his first portfolio of etchings consisting of twenty five plates. This was Haden's only portfolio that he had ever published. Haden was able to view the Thames right around the corner from his house in Chelsea. As you can see, more of the area is filled up and his lines become less discrete in defining objects. Also, in the first two works presented, Haden takes a more symmetrical point in his paintings. However, after this portfolio was published, he starts to loose his horizontal lines and works on a more asymmetrical standpoint. 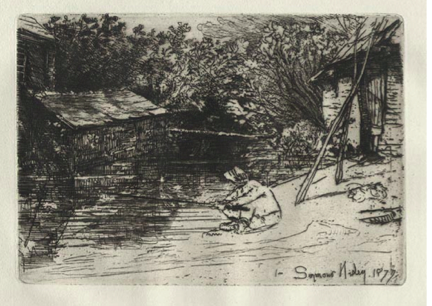 The Complete Angular, 1877
The Complete Angular (1877) exemplifies Seymour Haden’s later styles, displaying deep, thick lines and vast gravities of shading. As mentioned earlier, this piece exemplifies Haden's shift to a more asymmetric viewpoint. Supposedly, this new interest in deep and thick impressions came about due to his new mindset of being “old, blind, and unhappy.” In response to his nostalgia, he composed an etch of one of his favorite pastime hobbies as a child – fishing.

Pointon, M. “Etching and the Languages of Art Criticism in Nineteenth-Century Britain. Journal of the Association of Art Historians 20(1). Oxford, UK: Blackwell Publishers, 1997.