I have always been interested in the way that a person’s artistic expressions reflect his/her life experiences.  Even though I don’t believe I am at the point, in my artistic skillset, to entirely capture my emotions and personality, I find it fascinating to see how a few great artists are able to do this.  Last semester I studied abroad in Spain and was fortunate enough to take an art history class that allowed me to go to the Prado museum once a week.  One of the artists that caught my interests was Francisco Goya, who I thought concretely expressed his own life in his paintings.
Goya was born in Fuendetodos, Aragon, Spain in 1746.  He was quickly regarded as a skillful artist and gained favor with the Spanish monarchy, however throughout his life he’s always had a subversive imaginative element in his art.  His portraits are nortable for their disinclination to flatter (Voorhies).  In particular the painting Charles IV of Spain and His Family shows an incredible frank portrait of the royal family.  Goya is almost satirical and shows the corruption of the royalty.  He is not trying to flatter the family with the portrait.  I believe this shows is initial discontent with society in Spain. (ibid)

I think that Goya continues to show his discontent with Spanish society.  He frequently painted scandalous images, for example the first fully nude life size portrait of a female in Western art.  Later condemnation of Spanish society he created a set of 80 prints called Los Caprichos.  Some of the most famous of these happened during the Napeoleonic Wars, showing Goya’s internal turmoil of the changing Spanish government and cruelties of the War (Mcdonald).  These are a series called the Disasters of War.  The Third of May 1808 is shown below where Goya represents the resistance to French forces (ibid). 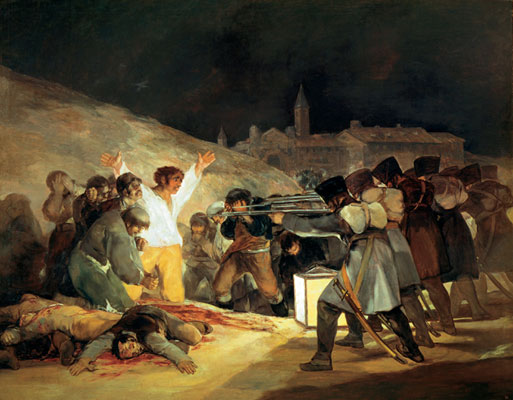 At the end of his life, we can see that Goya begins to have an embittered and dark attitude towards mankind.  He became very ill multiple times, which resulted in his deafness, and the stress from the death of his first wife is believed to have made him reclusive and insane.  This led to his creation of the Black Paintings, which were extremely modern and expressionist style that portrayed intense haunting themes.  Additionally, these paintings were drawn on the walls of his country home, but then translated into prints (Kramer).  This I believe is reflective of his insanity and pessimistic outlook on humanity.  One of the most famous Black Paintings, Saturn Devouring His Sons, is shown below.  In this depiction the god Saturn is eating his newborn sons out of fear that they will overthrow him.  This also demonstrates the theme that time is the devourer of all things and no one can escape it (ibid).  Below is a sketch showing how he planned these dipictions, entitled Soldiers Fleeing a Phantom (ibid). In conclusion, I find it fascinating how we can follow the lives of amazing artists like Francisco Goya through their artwork, from social discontent, to outrage, to pure insanity.