Pierre-Paul Prud’hon was an influential allegorical and portrait painter who was born on April 4th, 1758 and passed away on February 16th, 1823. This French painter was born to a stonecutter in Burgundy, but began studying painting at the age of 16 in Dijon. He then studied Neoclassical techniques in Italy before returning to Paris during the French Revolution. Prud’hon became known in Napoleon’s high court for being called upon to paint portraits of Josephine the Empress, many other court members, and to decorate Parisian mansions. Thus, he reached a high status in the French courts.

In regards to style in technique, Pierre-Paul Prud’hon spanned multiple bridges. He has been noted to encompass techniques and styles of both the Neoclassical and Romantic eras, with his love for Romanticism being particularly highlighted in his portraiture and nude studies. Prud’hon was particularly apt in portraiture and figures as well as full scenes depicting the rich or mythological scenery. Although Prud’hon was known for his work in oil paintings, his drawings using chalk and charcoal are also prominent. 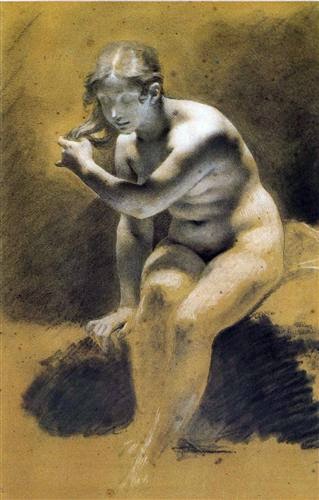 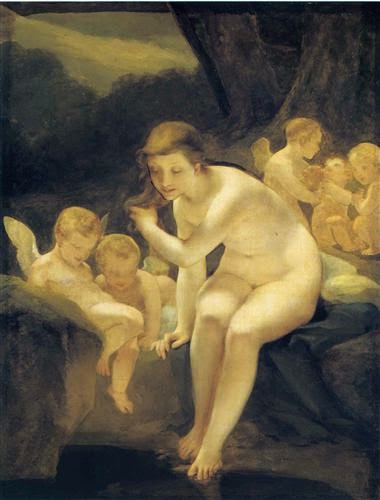 Prud’hon often used charcoal and chalk to create study drawings for more elaborate works. “Bathing Venus” was a study drawing in chalk with a soft feel. The deep contrast between the white and black chalk highlights the luminescence of the figure and truly gives a mysterious and romantic feeling to this mythological persona. The figure’s anatomy is clearly delineated, however the shading is soft and blended giving the appearance of supple human skin. As a study drawing we can see that Prud’hon did not get too involved with the background and although we can see he has some idea of a rock Venus is sitting on, the shading is very messy and does not detail the intricacies. I have included the final piece for comparison, which has many children in the background, as well as water and trees. Prud'hon's contrast in shading is mostly washed out in his final piece. 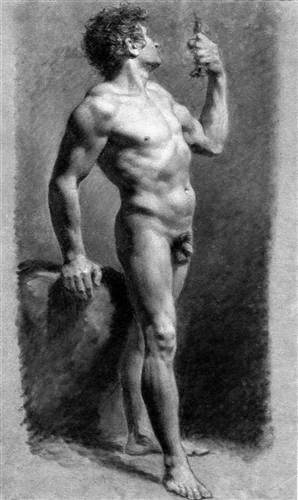 Even more common, Prud’hon used charcoal to study the human figure and anatomy in an academic setting. In “Male Nude Turning, 1800”, chalk and charcoal was used to create a very detailed academic drawing of the male human figure. The background is given more attention here and although it is not shaded in great detailed, the richness of the blacks serve to highlight the figure. In this drawing, the type of shading is a lot more detailed and we can see that there may have been more use of pencils and less blending with some “graininess” to the figure if observed very closely. This drawing has much more of an academic feel with the softness lying in the gesture and placement of the figure in the light and dark. However, these has been great care in shading each muscle correctly while the objects further in the background are not given as much attention such as the left arm of the man. This holds true for many of Prud'hon's works. 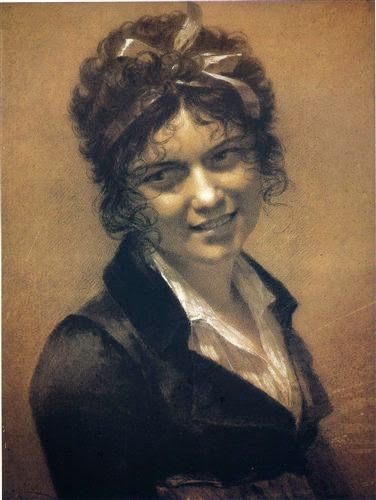 Finally, I chose to include a “Portrait of Constance Mayer, 1804”. Although Pierre-Paul Prud’hon rarely did his portraiture in drawing media, this piece indicates that he can successfully do so in a mixed setting, although with a different feel to them than his full oil portraiture. Prud’hon uses very detailed shading especially in regards to the eyes and hair to give it a very realistic feel. This portrait looks more contemporary than many of his pieces and he uses white highlights to bring out Constance Mayer’s smile and emotion. Yet, the shading in the image does not have as much direct contrast between whites and blacks next to each other to give the Romantic “glowing” feel of many of his other pieces.

Although Pierre-Paul Prud’hon is not a very well known painter, his drawings of humans are very informative in how to add an extra element of Romanticism and softness that most academic drawings do not have. However, Prud’hon’s work remains very realistic: a true blend between Neoclassical and Romantic styles.