"We were created to look at one another, weren't we?"-Edgar Degas

Edgar Degas was born on July 19, 1834 to a moderately wealthy family in France. This famous artist started off his young life as a rigorous academic- he earned a baccalaureat in literature, and studied classic art intensively in hopes of becoming a history painter ("Edgar Degas Biography"). He spent a large part of his early career drawing and painting copies of Renaissance art, such as that of Michelangelo, Raphael, and Titian.
However, Degas’s focus shifted from recreating the classics to making modern art. He joined an independent exhibiting society that quickly gained a reputation as part of the Impressionist movement ("Edgar Degas Biography"). However, Degas himself abhorred the title of impressionist artist, and he wholly rejected it, preferring the titles of realist or independent instead (Schenkel). 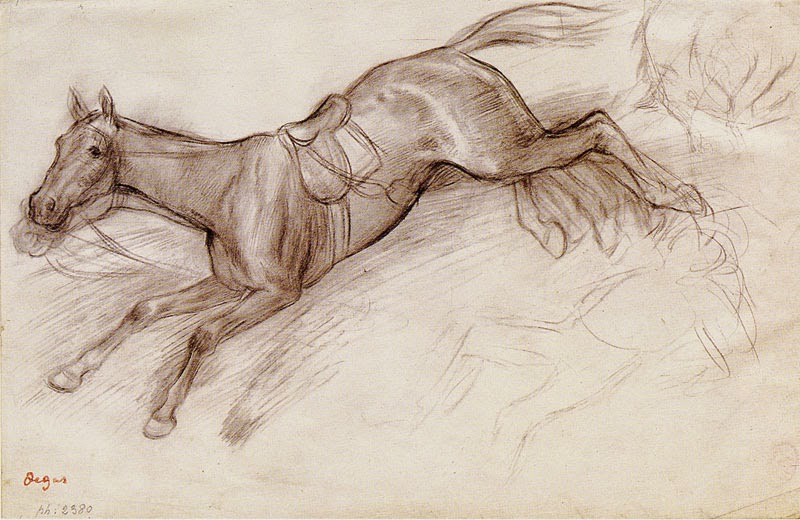 The Bolting Horse, c. 1866. Pencil and Charcoal (Lloyd 93).
Degas focused on motion. Most of his works capture their subject as if it is an action shot of a moment in time. Yet, in this drawing, he seems to add lines to it to make it more dynamic.

Degas’s style was a combination of many unique characteristics. Although he rejected the Impressionist label, much of his art shared some of its traits. Impressionism is generally classified by images depicting real life, yet with the use of very bright colors. Degas experimented with color in his work, and often added occasional pops of vivid colors and bold lines. Degas created a variety of art forms, ranging from paintings and drawings to sculptures and prints. Most of his art depicted some form of movement, and often it was of his favorite subject- dancers. Degas had a particular fascination with dancers and created hundreds of pieces of art with them as the subject. He worked with oil on canvas, pastel, or even printed photography reworked with pastel. Degas was known use a variety of techniques in his art, including “hatching, contrasting dry pastel with wet, watercolors to soften contours” and so on (Schenkel). 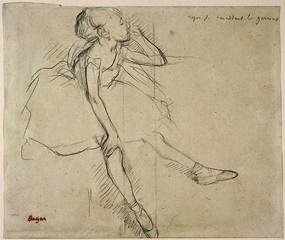 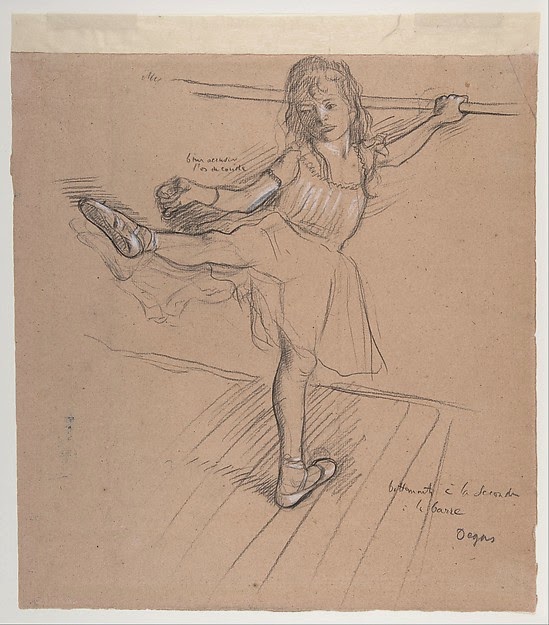 These works depict the typical Degas- a female figure caught in a certain motion. It is interesting that the dancers he chooses to draw are not perfect, slim figures. Usually, he shows dancers without all the glory- they are at times awkward, tired, in transition, and just plain human (Richardson). 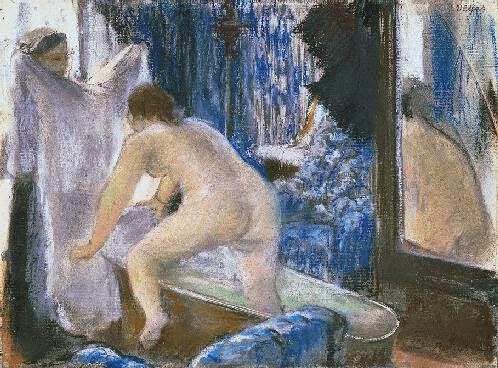 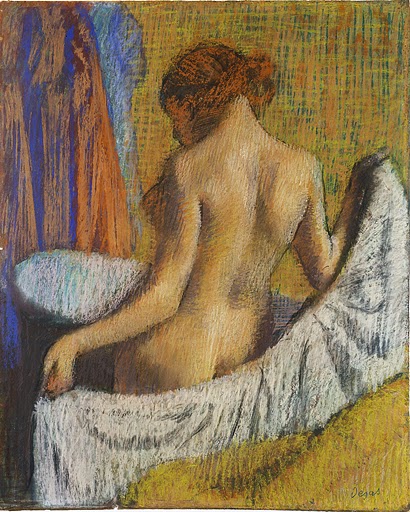 After the Bath, Woman with a Towel, c. 1893-97. Pastel on blue-grey paper (Lloyd 286).
These works are also very much in Degas’s own unique style. He often captures his subjects in moments of innocent vulnerability, as they go about their daily lives.

After serving in the Franco-Prussian War in 1870, Degas’s eye problems intensified and his eyesight deteriorated. He fell into a depression in his later life, and this is reflected in his later work. Degas’s later pieces of art seem very different from the earlier pieces, and they depict different subjects, such as landscapes of lonely scenes(Lloyd 245). However, Degas is mainly remembered for his art focusing on the female body. 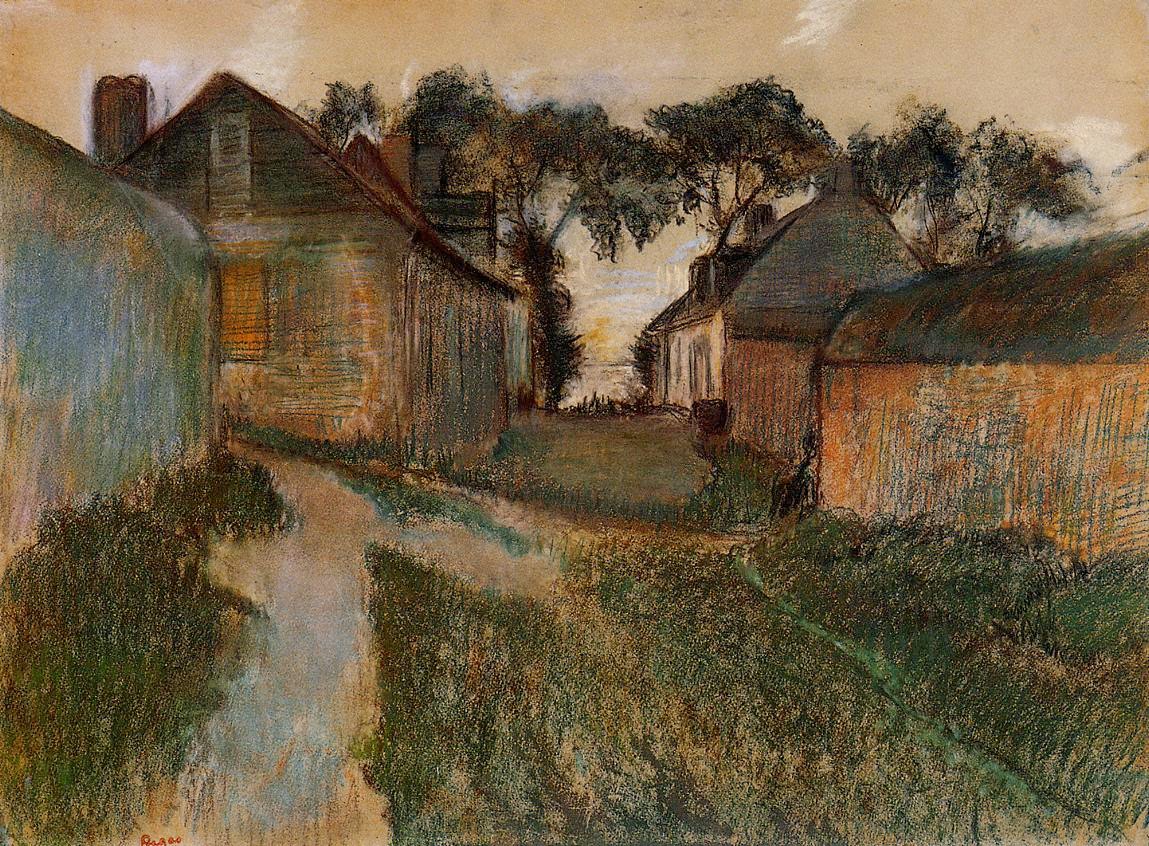 La Rue de Quesnoy, Saint-Valery-sur-Somme, c. 1896-98. Pastel. (Lloyd 267).
This work was done in the later stage of Degas’s art. It is quite different from what he is known by, the depictions of females in motion. Most of these landscape works were done with pastel.

I chose to profile Edgar Degas because I remember when my mother took me to the Edgar Degas exhibit in the Norton Simon Museum as a child. It was the first time I had ever been exposed to his work, and his art was at the same time shocking and captivating to my young mind. The nude drawings and sculptures seemed like taboo, but there was something honest and innocent in the art that drew me in and removed the hint of scandal. And that is the beauty of Degas’s work. It’s real in a charming way.