Edgar Degas (1834–1917) was a French artist famous for his paintings, drawings, sculptures and print making, especially recognized for his pictures of dancers. In his late work the delicacy of his detailed painting style drew great admiration from critics and art admirers. This later, mature period reveals Degas’ technical expertise and incredible creativity through the depiction of various ballet scenes, landscapes and portraits. His figures appear as if in a dreamlike state, romanticizing modern life and the contortions of the human body from various unexpected vantage points.

Degas was born in 1834 in Paris, France. He was trained in the classics, through which he developed traditional techniques as well as inspiration from outside influences such as the Italian Renaissance painters and their frescoes. While he lived through the Impressionist era, he never conceded to taking on the label, preferring to be called a realist. Nevertheless, his scenes depict many of the core tenants of impressionist art in his choice of open air landscapes, figure contours, and scenes of modern life in cafes and theaters. His late work in particular possesses a certain sense of ambiguity, recognized for its trance-like state between past and resent. The notable features of dangers are almost invariably shown in rehearsal or backstage, evoking a deeper understanding for the effort and sacrifices made in the strive for artistic perfection. 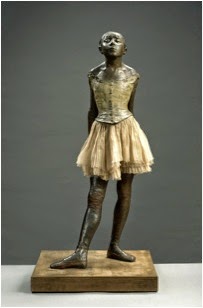 In the early 1880s Degas began to pull away from Impressionism and experiment with his monotype series, most famously the wax doll of a sculpture, the Petitte danseuse de quatorze ans (1878-81). The raw uncast wax of the dancer contrasts with the real, literalist silk and linen, the tutu of tulle and cotton bodice, on show in a museum glass cabinet. The institution nature of the presentation seems to underline the connection between art, commodity, and the specimen exhibition. The sculpture was like nothing else of its time, received by most as radical in its “devenustation” of the female face and body, with ugly features supposedly revealing “plebian” origins. This piece established Degas as a sculptor of note, despite the lack of specialist training in the field. 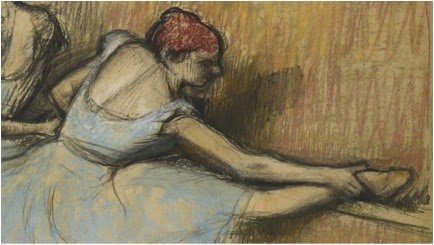 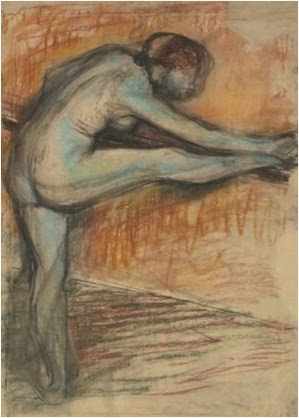 From the late 1880s until 1910, Degas confined himself largely to four subjects: dancers, nudes, jockeys, and horses. This study and oil painting provide a striking example of the artist’s fascination with the female nude and the ballet. The first,, Étude de Nu pour une Danseuse á la Barre, is pastel and charcoal on paper, in which Degas examines the female body in particular pose,, exploring the nuances of movement and form. In the late period of his oeuvre, his work in pastel features mostly nudes, utilizing sponging, scribbling, hatching, and smudging techniques. Degas' lasting interest in dance ranges from these natural unguarded gestures of dancers at rest to the more stylized, trained movements of classical ballet. For his large pastels, Degas often utilized such preliminary studies of isolated figures. The second piece, Danseuses a la barre, shows the dancer now clothed in a tutu and shoes. The viewer seems to catch the figure in a private moment, her head turned gently and only partially visible. The immediacy of the figure augments the captivating beauty of her pose, while the gaze evokes a more melancholy effect of concentrated effort. Degas’s masterful depiction of the human body in motion creates a visual metaphor for the strive for artistic perfection.