Edgar Degas, was one of the founders of impressionism, an art movement that started in Paris in the 1860s and 1870s.  The style involves using thin small but visible loose brush strokes and splotches of color and brought more movement to paintings than traditional still lives of the time. Impressionists often painted outdoors, believing that this would allow them to better capture a transient moment.  However, the term “impressionist” does not fully describe Degas’ style. In fact, he disliked the term and preferred to be called a realist, a style that emphasizes the life of common people without romanticizing the individuals or scene.  Unlike impressionists, Degas did not consider his art spontaneous because he spent a long time studying his subjects and made frequent study drawings.   Degas also used more line and contour than other impressionists, rarely used the bright splotches of color characteristic of impressionism and mocked the practice of painting outdoors. Despite these differences, most people still consider Degas one of the founders of impressionism. Along with other impressionists such as Claude Monet, Paul Cezanne, Vincent Van Goth, and Pierre-Aguste Renoir, he challenged the artistic conventions of the time and was often ridiculed by art critics.

Degas was born in Paris in 1834 to a reasonably wealthy family. He graduated with a baccalaureate of literature and then registered as a copyist at the Louvre museum. Degas’ father was unhappy with this decision, wanting Degas to become a lawyer. Degas enrolled in law school in 1853 but put more energy into art than his studies.  He did not finish his law degree and in 1855 enrolled in the École des Beaux-Arts instead.  Degas was influenced greatly by Jean-Aguste-Dominique Ingres, a French Neoclassical painter. At the art academy Degas studied under Louis Lamothe and then moved to Italy, where he continued his study of art.  Degas initially followed traditional methods of painting but 1865 his style shifted.  He stopped painting academic subjects and history scenes, instead painting scenes from modern life.

In 1872 Degas moved to New Orleans, where he painted a piece A Cotton Office in New Orleans. 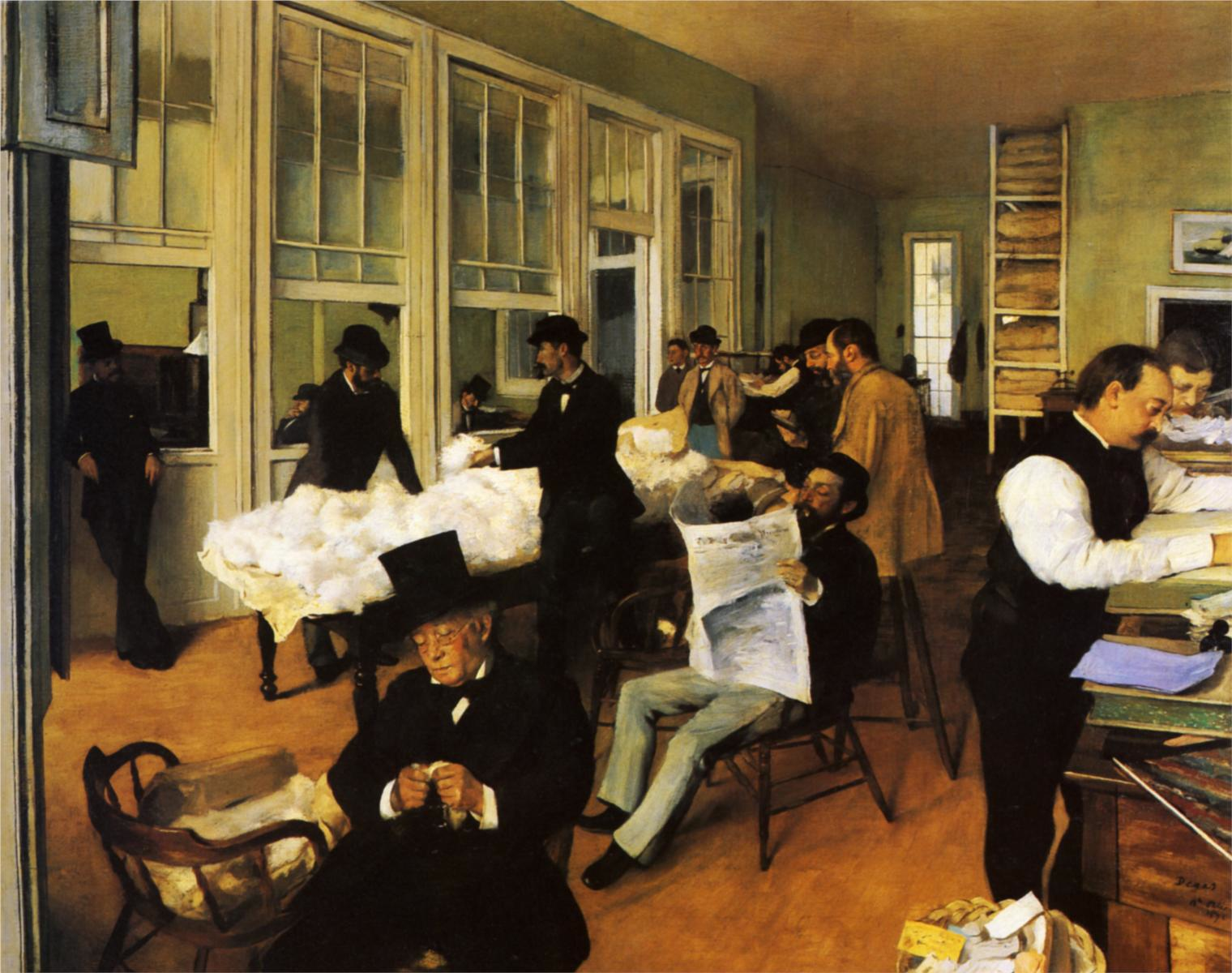 A Cotton Office in New Orleans is an oil painting that shows a typical day at a cotton factory.  True to the style of realism, this painting does not romanticize nature or figures but rather shows a more mundane scene.  It uses muted colors and has bold shapes.  It is difficult to make out precise detail in the clothing of some of the figures. The painting contains many different characters each performing a different activity. Even though most of the men are doing something stationary, the variety of activities—reading a paper, picking through cotton etc, creates a feeling of movement and draws the viewer’s eye through the painting. This painting is less impressionistic in nature than many of his later works.
In the 1870s Degas began to paint dancers, which is what he is most famous for.  The ballet combined Degas love for classical beauty and modern realism. He used multiple mediums, producing pencil and chalk drawings, monotype prints and pastels, as well as oil paintings and sculptures of ballerinas. Degas painted dancers over and over because he believed it was “essential to do the same subject over again, ten times, a hundred times. Nothing in art must seem to be chance, not even movement.”
The drawing below, titled Two Dancers, is one of Degas’ earlier works of ballerinas. 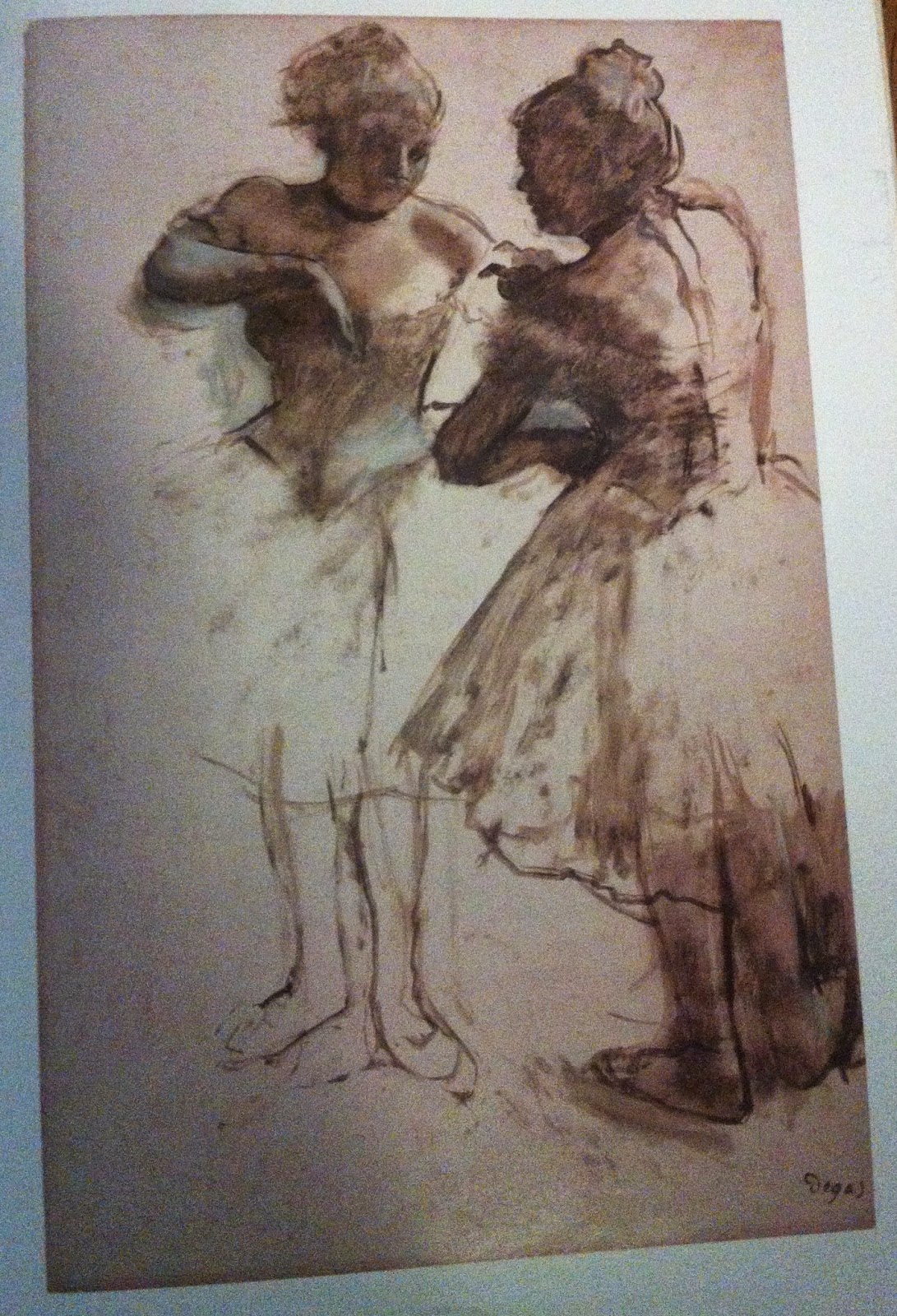 This painting was made with dark brown wash and white gouache on bright pink commercially coated wove paper (now faded to pale pink).  This piece shows Degas’ creativity in combining multiple mediums as well as his use of unusual materials on which to paint. Though the painting does not have precise detail, it gives a sense of the motion of the dancers. This painting shows some elements of impressionism as well as areas he diverges.  Similar to impressionist paintings, Two dancers has visible short brush strokes. It also contains a lot of motion and depicts a scene from everyday life. However, unlike impressionist pieces, the painting involves little color and contains defined lines. Degas uses thick sketchy lines and dark contour lines around the head and hem of the dress.
The two drawings below are also characteristic of Degas’ realist style and obsession with dancers.  Though the two paintings were created in different years, they are quite similar and so I thought it interesting to juxtapose them. 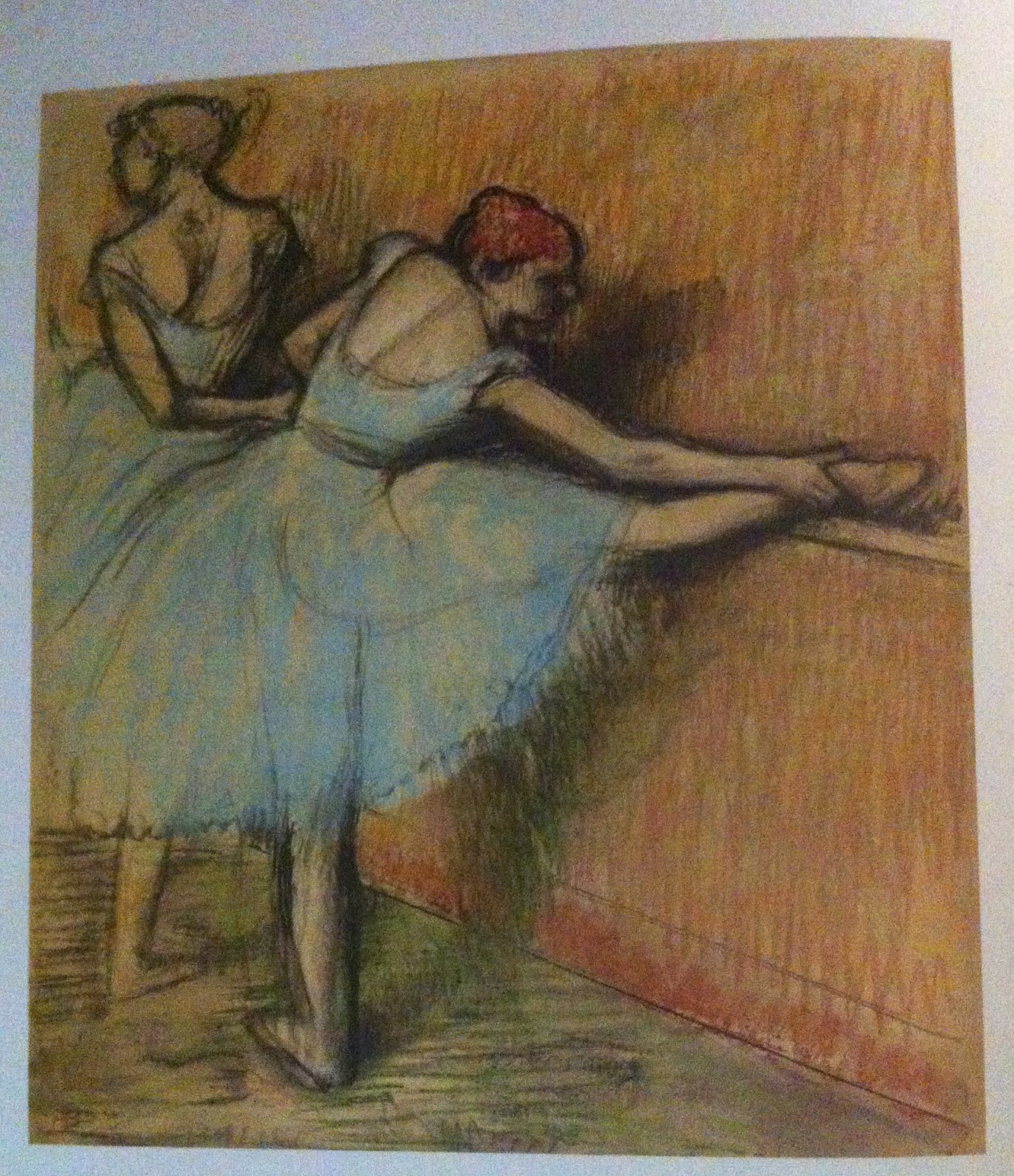 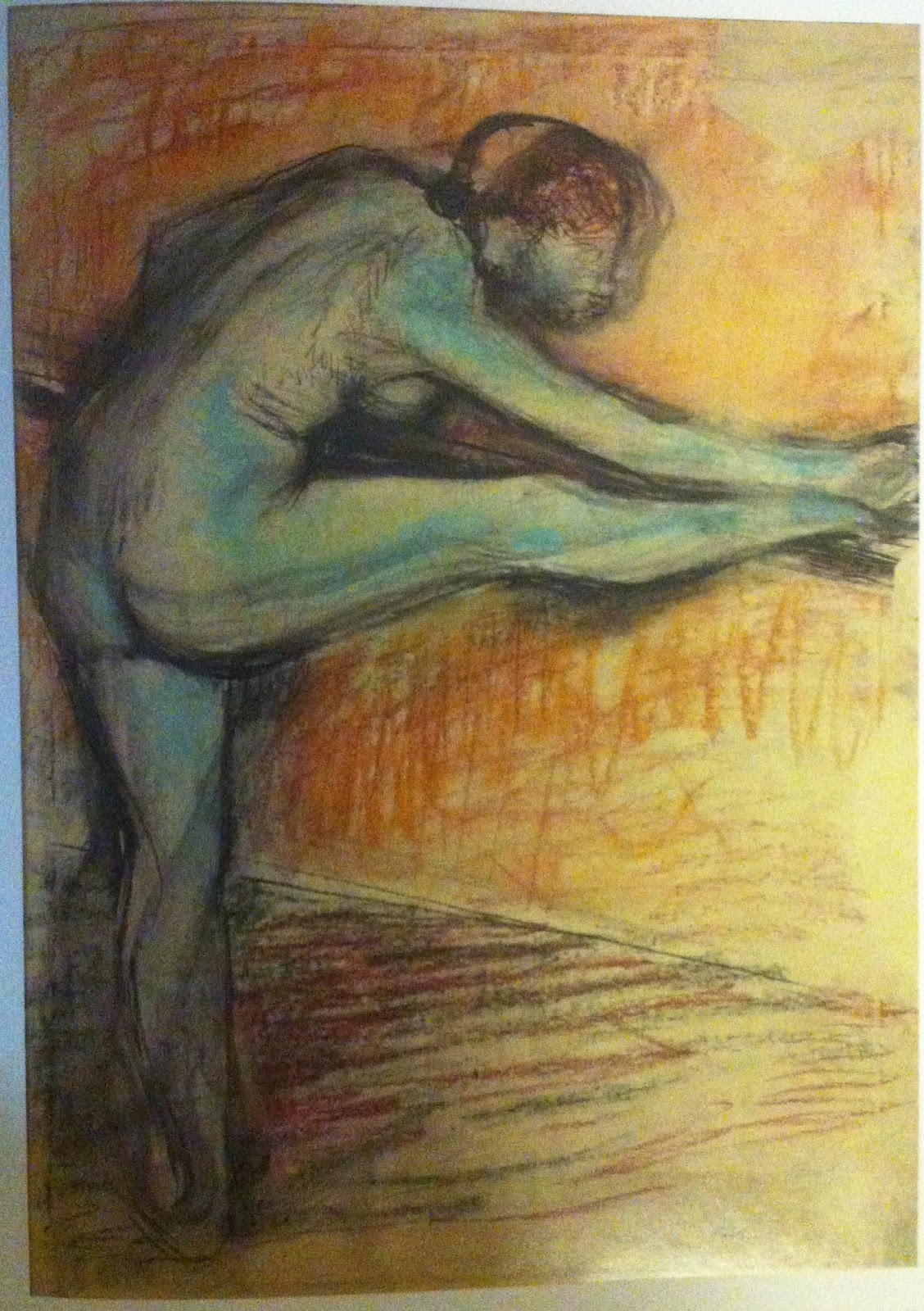 The position and shape of the primary figure in Dancer’s at the Barre and Study of a Nude dancer at the Barre is very similar. The first drawing is charcoal and pastel on tracing paper, laid down on cardboard. The second is charcoal and pastel on paper, laid down on board. Both of these drawings of dancers show Degas bold use of line and his ability to depict movement.  They also show Degas’ shift toward a more impressionist style. They use rough sketchy lines, especially for the background.  Degas uses thicker lines to give weight to the subjects. For example in Dancers at the Barre, the contours lines of the dancer’s right arm and leg, especially where it meets the bar, are thick and dark. Both drawings have similar color schemes; the dancer is a cool blue and the background a muted orange-red.
Though Degas’ style changed over time, his love of painting dancers remained. He continued to paint dancers for 30 years.  Degas collected Japanese prints and got into photography in the 1880s, both which influenced his painting style. Though many of his paintings used dark muted colors, some of his paintings used bright bold colors, more typical of impressionism. Degas continued painting through the early 1900s and continued making sculptures as late as 1910. He died in 1917.
Degas was innovative in his depiction of everyday scenes, his depiction of motion through lose sketchy lines, his use of mixed media and his obsessive study of a single subject.  I was quite impressed with Degas’ ability to convey the movement of the ballerinas. The poses of the dancers draw the viewer’s eye all across the painting, adding to the movement of the piece. I quite liked Degas’ use of study drawings, something that I do not do enough of.  For Degas, the stuy drawings seem as important, if not more important than the final pieces. Even after looking through several volumes of paintings and sketches of dancers, I did not lose interest. Each drawing managed to convey something slightly different and teach me something new about the figures.  Degas’ artwork demonstrates that one does not need precise line or detail to convey movement and feeling. However, it is also important to note that though many of his drawings may appear to be quick random sketches, he was in fact incredibly thoughtful and intentional in his drawings.