Theodore Gericault was born on September 26, 1791 in Rouen France. Gericault was educated in classical figure composition and then studied at the Louvre where he spent 6 years copying paintings. He then traveled through France where he started his series of tormented military-themed works. Gericault then traveled to Rome and Florence, where he observed the works of Michaelangleo. He finally traveled to England in 1820, where his artwork continued to depict the suffering and poverty he witnessed on the streets, before he returned to France in 1821. Gericault produced the majority of his paintings and drawings between the mid 1810's up until his death in Paris in 1824, after suffering from a chronic tubercular infection. He was 32 years old when he died.
A popular style while Gericault was young was neoclassicism. He was trained by several
enthusiasts of classical composition, but Gericault left to study at the Louvre where he copied
paintings from Peter Paul Reubens and Diego Velazquez for a few years. After his first popular
work The Charging Chasseur, Gericault produced a series of small drawings and paintings of
horses and cavalrymen, with limited success. Gericault's art continually returned to military
themes, depicting the misery of war and its devastation on the common soldier. Perhaps one
of his most significant pieces of work is the Raft of Medusa (1819), which depicted a shipwrecked 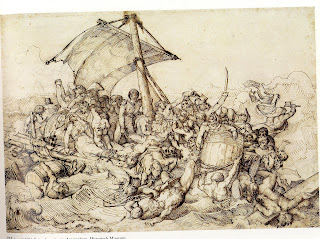 French crew struggling to survive the harsh
seas after their captain had left them all to drown.
A sketch and final painting of the Raft Of Medusa
is below: 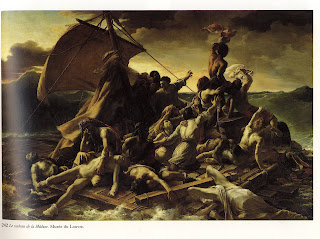 In the 1820's, the instability of France reached its peak and violence was rampant. The new uproar from the lower class made it difficult for classicism in any form to succeed. Gericault became engaged and represented this new chaotic and aggressive world with drawings and paintings of poverty and despair which he confronted everyday on the streets. 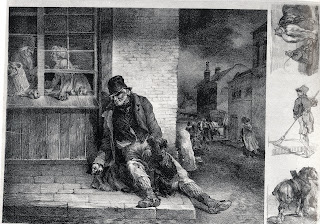 To the right is a drawing of a begging pauper on the streets, which is a reoccurring theme
in Gericault's sketches. In 1821 Gericault painted a series of ten portraits of insane ayslym patients, which were noteworthy for their expressive realism and for documenting the psychological struggles and torments of the individuals. Gericault also often used classic myths such as Leda and the Swan to symbolize the power struggle within France. Serge Guilbaut, an art historian, commented that Gericault created “Classical scenes [that] were infected with contemporary issues.” However, it is important to note that although his scenes were classical, his depictions of the characters expressed their utmost torment and the chaotic world they lived in. 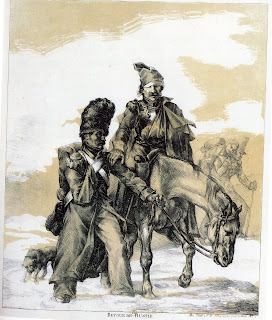 The most reoccurring character in his artwork were horses, whom he also used symbolically to express his outlook on the world and its problems. The drawing above shows how horses play such an important role for portraying the mood in his work.
Gericault's artwork grabbed my attention because he often drew nostalgic works depicting
classical or heroic scenes, yet which were also inundated with bittersweet suffering and despair. 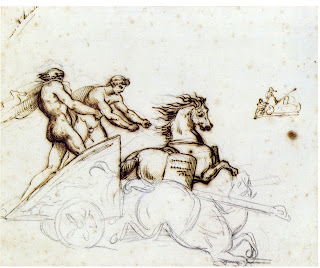 Most of his drawings and paintings are a snapshot
of a very dramatic and emotional realization,
often including horses, which captured the agonizing
episodes of history. Gericault also did not
hesitate to express the misery of a repressed France
and incorporate them into the recently
popular neoclassicism style. He took the fantastical
and turned them into symbolic
representations of reality. To the left is a sketch depicting the classical struggle of Hercules and Mars, which is also symbolic of the internal struggles in France.
-Corinne Horn
Posted by Corinne at 9:37 AM