Jean-Auguste-Dominique Ingres (1780-1867) gained early success as a painter winning the Prix de Rome when he was only twenty-one, but his trip was delayed as a result of the Napoleonic Wars until 1806. His first high profile commission came from the French Legislative Assembly for a Portrait of Napoleon on his Imperial Throne which was displayed in the Salon and heavily criticized by the French Academy. Ingres’s initial paintings in Italy were poorly received, but with the true air of a Romanticist he stayed in Italy for additional fourteen years, frequently impoverished, after his original four year stipend expired. Ingres continued to send painting s back to the Salon in Paris which were usually met with disapproval. In 1821, Ingres was poor and all but forgotten by his French peers, when he was commissioned for the huge painting The Vow of Louis XIII. The painting led to rave reviews at the Salon in 1824, and Ingres’s life began to turn around. When Napoleon fell in 1815 his head painter was exiled stalling the careers of all his students leaving France especially receptive to a new master which Ingres graciously filled. In 1825, Ingres was elected to the French Academy (which he had abhorred), quickly became its director, and was awarded the Legion of Honor. Not only has history remembered Ingres’s paintings as the face of the Salon from 1820s-1860s, his style and imagery have been recalled by countless artists.
I chose Ingres because despite being best known for his large scale oil paintings, his pencil drawings, especially his portraitures are rich with emotion and truly reflect the people he was passionate about. You can see both his Romanticist and Neoclassicist influences in the way he gracefully portrays his figures. All of the drawings displayed here were done in pencil. 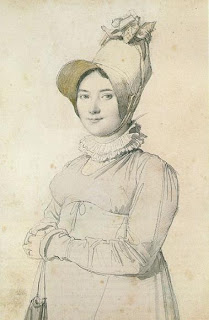 This is a portrait of Ingres’s wife, Madeleine Chapelle, glowing with pregnancy. They were recommended to each other by friends and courted through letter writing. Ingres proposed to Madeleine without ever meeting her, and by all accounts they had a very happy marriage except they were unable to have children. Their only child (the one she is carrying in the drawing) was stillborn. 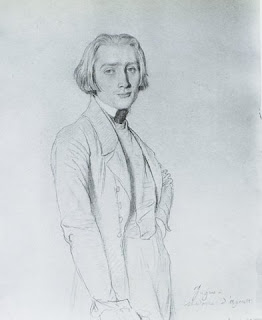 This is a portrait of Franz Liszt, an incredibly talented and popular Hungarian pianist. Ingres, being a gifted violinist himself, drew many of the famous and influential musicians who visited him in Italy. 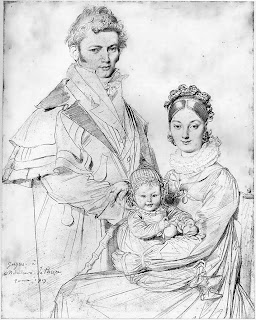 This is a family portrait of the Lethier family. I like his diverse use of line, and how their is such affection between all of the family members.
Downey, Charles T. "Ingres at the Louvre." Rev. of Ingres Retrospective at the Louvre. Web log post. Blogger.com. Ionarts, 26 Mar. 2006. Web. 7 Oct. 2009. http://ionarts.blogspot.com/2006/03/ingres-at-louvre-part-1-of-2.html.
Harrison, Charles, Francis Frascina, and Gill Perry. Primitivism, Cubism, Abstraction. New Haven & London: Yale UP in association with The Open University, 1994. Print.
Janson, H. W. Janson's history of art the western tradition. 7th ed. Upper Saddle River, NJ: Pearson Education, 2007. Print.