Edgar Degas, a French artist famous for his painting, drawings, printmaking, and sculpture, was born in 1834 and died during world war I in 1917. He was considered an impressionist but preferred to refer to himself as a realist. He was very independent and courageous, which many believe was inherited from his adventurous grandfathers. His father, Auguste de Gas, a banker, intended on him to receive a good education at the Lycée Louis-le-Grand and to study law to become head of family bank. Despite his wish to paint, he attended law school but never went to classes.
After graduating from Lycée in 1853 with a baccalauréat in literature, he registered in departments of prints at Bibliothéque and drawing in the Musée de Louvre. In 1855, he met an artist named Ingres, whom he admitted to that he wanted to become an artist. Ingres replied “Draw lines… a lot of lines, whether they are from memory or from nature”. Degas took this advice to heart, and it is prevalent in his style.

In his early career, Degas did most of his work at home, using his younger brothers and sisters as his models. Degas’s works of his family were “affectionate and assured”, and varied drastically from his simple and monochromatic sketches of landscapes and buildings. This is prevalent in the numerous sketches and drawings of his youngest brother, René, whom Degas was most fond of.

This profile sketch of René, René de Gas, was done with chalk in 1855. This picture almost “comes to life” with the way Degas uses line to curve the back of his head and uses value to add weight to his locks over his forehead. The accented nostrils, mouth, and through also give this simple sketch a life like appearance. In this sketch, Degas is probably mimicking Hans Holbein the Younger’s The Artist’s Family in the position of René’s head (profile angle looking upward). Degas is probably trying to depict a longing expression in his brother that is evident in Hans Holbein’s work.
Around 1869, Degas began to venture to the outdoors more frequently to work, and formed an odd fascination with horses. He enjoyed going to Longchamp races in Paris with Manet and other friends. Degas did numerous works of jockeys between 1866 and 1868, one of the most famous being Four Studies of a Jcokey. 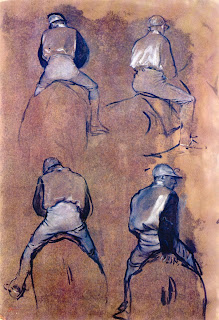 This mixed media drawing is of one jockey from four different angles as he prepares to ride. One of the most noticeable aspects of this work is how Degas positioned the four images on the page. He binds together the four views of the jockey onto on page beautifully. The rider is in slightly awkward positions in the four poses of the work, but Degas does a fine job expressing these poses with simple line, and the horse is only composed of a few black lines. Also to note in this work is Degas’ unique choice of media and materials. The black gouache and blue and white oils stand out wonderfully on the brown, oil-stained paper.

In the 1890’s, Degas began to concentrate upon the nude. He writes to a friend: “I am hoping to do a suite of lithographs, a first serious of nude women at their toilet.”
In the last decades of his career, he worked on a series of lithographic nudes and figures of maidservants, varying them drastically. Many of his works were of models posing uncomfortably in his studio. In his last works, Degas appeared to be torn between the “artificiality of his own creation and reality”. 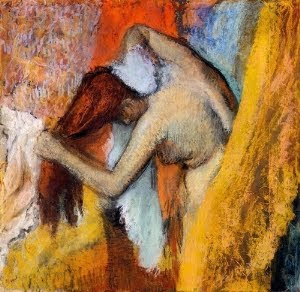 This uncertainty is evident in his work, Woman Drying Her Neck. In this pastel drawing, Degas emphasized her arched spine with line, curving it more to one side. He uses her back as a main point of departure because of its “clarity and energy”. He gives the body a “greater physical force” by making the neck and head more prominent. Also to note are the rich hues he used in the work, especially noticing the luxurious red color he uses for her hair, giving it depth and weight.