Leonardo Da Vinci was born on April 15, 1452 in the town of Vinci, Italy. His father was a notary named Ser Piero d’Antonio da Vinci, while his mother was a woman by the name of Caterina (Douglas 1). As a young man he became an apprentice to the Italian arist Andrea del Verrocchio. During Da Vinci’s time as an apprentice to Verrocchio, he developed his skills as an artist (Douglas 5). In 1478 Da Vinci started taking on commissions independent of Verrocchio (Douglas 9). Da Vinci’s commission by the monks of S. Donato a Scopeto prompted him to start “Adoration of the Magi” in 1481. However, Da Vinci did not finish this painting because he left for Milan in 1482 (Douglas 11). During his time in Milan, Da Vinci completed numerous paintings. However, he also pursued his many other interests, which included civil engineering, military engineering, and architecture (Douglas 14). One of Da Vinci’s most famous paintings, The Last Supper, was created at the request of Ludovico il Moro. Da Vinci likely began this painting in 1495, and finished it in 1498 (Clark 90). The French King Louis XII invaded Milan in 1499, prompting Da Vinci to leave the city. (Douglas 19-20). Da Vinci returned to Florence in April of 1500 (Douglas 25). In 1502 he left Florence to work as a military engineer for Caesar Borgia (Douglas 29). Da Vinci continued to travel, returning to Florence in 1503, and then to Milan in 1506 (Douglas 30-31). He started painting one of his most famous works, Mona Lisa, in 1503 (Douglas 29). When Leo X became Pope in 1513, Da Vinci left for Rome. In Rome, Michaelangelo and Raphael already had strong influence (Douglas 33). In 1516 Da Vinci moved to France at the request of Francois I (Pedretti 60). Leonardo Da Vinci died on May 2, 1519 (Douglas 36).

Leonardo Da Vinci is an artist of the Renaissance. Da Vinci used tools like perspective to make his work more realistic and true to life. He depicted light and shadow using a technique called chiaroscuro, making his subjects appear more three-dimensional. He also used a technique called sfumato to achieve a realistic feeling of depth in his paintings, whereby light and dark tones are subtly blended together (“Leonardo Da Vinci”). Da Vinci’s Mona Lisa is often cited as an example of the sfumato technique. 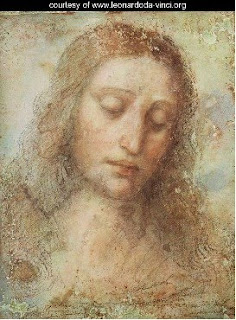 This drawing, Head of Christ, is a study of Jesus’ head that Da Vinci likely completed in 1495 in Milan. It is a study for his painting The Last Supper. Da Vinci’s drawings often include studies of his paintings’ subjects (Goldscheider 153). 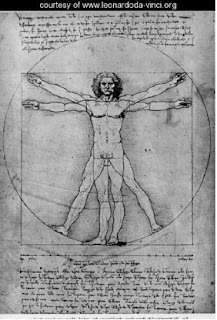 Da Vinci’s The Proportions of the Human Figure was completed in Venice in about 1492. One of Da Vinci’s many interests included learning more about the human body, and in this drawing we see Da Vinci’s attempt to draw a man with perfect proportions (Goldscheider 157). Many of Da Vinci’s other drawings include detailed sketches of the human body, including its organs and anatomy. 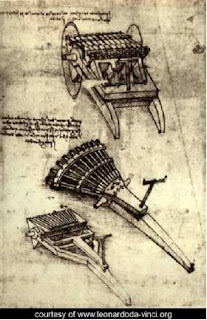 Da Vinci’s Machine Gun was completed around 1480-82 in Milan (Pedretti 361). Leonardo Da Vinci is widely considered to be a brilliant inventor, and created many sketches of devices that were ahead of their time, including these machine guns and sketches for a flying machine.

My Reasons for Choosing Da Vinci

I chose to study Leonardo Da Vinci for a number of reasons. Firstly, I find his artwork to be incredibly beautiful, particularly considering the subtly and care with which he blended colors and shades. He was also an incredibly brilliant “Renaissance man” who was ahead of his time regarding many aspects of science and the human body. Although he lived hundreds of years ago, his legacy endures to this day.

Clark, Kenneth. Leonardo Da Vinci: An Account of His Development as an Artist. Baltimore: Penguin Books, 1959.

All pictures courtesy of <http://www.leonardoda-vinci.org>.

Posted by Lauren Weinberger at 12:39 PM