Pierre-Auguste Renoir is a French painter originally associated with the Impressionist movement. His early works were typically Impressionist snapshots of real life, full of sparkling color and light. By the mid-1880s, however, he had broken with the movement to apply a more disciplined, formal technique to portraits and figure paintings, particularly of women.
In 1854 he began work as a painter in a porcelain factory in Paris, gaining experience with the light, fresh colors that were to distinguish his Impressionist work and also learning the importance of good craftsmanship. His predilection towards light-hearted themes was also influenced by the great Rococco masters, whose works he studied in the Louvre. In 1862 he entered the studio of Gleyre and there formed a lasting friendship with Monet, Sisley, and Bazille. He painted with them in the Barbizon district and became a leading member of the group of Impressionists who met at the Café Guerbois. His relationship with Monet was particularly close at this time, and their paintings of the beauty spot called La Grenouillère done in 1869 are regarded as the classic early statements of the Impressionist style. Like Monet, Renoir endured much hardship early in his career, but he began to achieve success as a portraitist in the late 1870s and was freed from financial worries after the dealer Paul Durand-Ruel began buying his work regularly in 1881. By this time Renoir had 'travelled as far as Impressionism could take me', and a visit to Italy in 1881-82 inspired him to seek a greater sense of solidarity in his work.
After a period of experimentation with what he called his `manière aigre' (harsh or sour manner) in the mid 1880s, he developed a softer and more supple kind of handling. At the same time he turned from contemporary themes to more timeless subjects, particularly nudes, but also pictures of young girls in unspecific settings. As his style became grander and simpler he also took up mythological subjects and the female type he preferred became more mature and ample. In the 1890s Renoir began to suffer from rheumatism, and from 1903 (by which time he was world-famous) he lived in the warmth of the south of France. The rheumatism eventually crippled him, but he continued to paint until the end of his life.
Renoir is perhaps the best-loved of all the Impressionists, for his subjects---pretty children, flowers, beautiful scenes, above all lovely women---have instant appeal, and he communicated the joy he took in them with great directness. `Why shouldn't art be pretty?', he said, `There are enough unpleasant things in the world.' 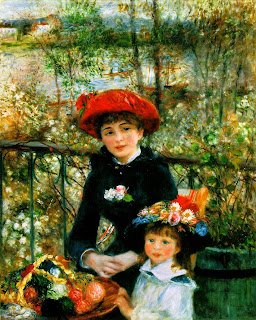 On the Terrace 1881; Oil on canvas, 100.5 x 81 cm (39 1/2 x 31 7/8"); The Art Institute of Chicago, Mr. and Mrs. Lewis Larned Collection It was painted at Chatou, a suburb of Paris, which Renoir considered an ideal leisure spot. The older girl is Jeanne Darlot who here at the age of eighteen sits pleasantly with a younger unidentified girl. Darlot would later earn supporting roles in the theater for a short time. This is a charming portrait of an outing as they wear their Sunday best, both accented by bright hats and rosy cheeks. 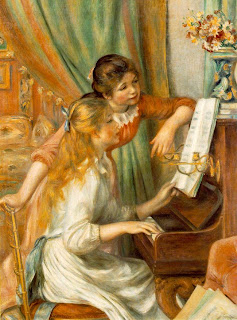 Jeunes filles au piano (Girls at the Piano) 1892; Oil on canvas, 116 x 90 cm (45 5/8 x 35 3/8 in); Musee d'Orsay, Paris In late 1891 or early 1892, Renoir was invited by the French government to execute a painting for a new museum in Paris, the Musée du Luxembourg, which was to be devoted to the work of living artists. He chose as his subject two girls at the piano. Aware of the intense scrutiny to which his submission would be subjected, Renoir lavished extraordinary care on this project, developing and refining the composition in a series of five canvases. The Lehman painting and a nearly identical version formerly in the collection of Renoir's fellow Impressionist Gustave Caillebotte have long been regarded as the most accomplished variants of this intimate and engaging scene of bourgeois domestic life. 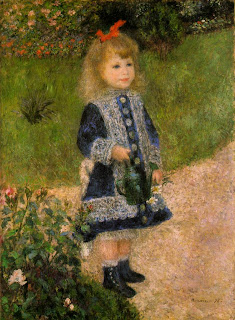 A Girl with a Watering Can, 1876, oil on canvas, Overall: 100.3 x 73.2, national Gallery of Art
This painting has long been a favorite of visitors to the National Gallery of Art -- and it seems that Renoir painted it with exactly this hope, that it would please a large audience. The first impressionist exhibition, in 1874, had brought Renoir and his fellow artists more notoriety than business, and the auction he optimistically organized for his own work the following year was a financial disaster. Unlike Cassatt, who had family wealth, Renoir, the son of a tailor, was in a constant struggle for money in his early career. He began to paint charming, light-filled scenes with women and children, like this one, in the hopes of increasing sales. He probably thought that the pretty child in her fancy dress might also attract portrait commissions. Although it was landscape that had provided the first, and most important, inspiration for impressionism, Renoir's instinct always led him back to the figure. The deep blue of the dress, the bright red of the bow and the girl's lips, and the cool greens of the lush garden behind her are all given a prismatic brilliance by Renoir's brushwork. Rather than blend his colors, Renoir has applied them in individual touches that dissolve edges and seem to shimmer with light. Impressionism sought to capture the effect of light on the senses, communicating a visual signal with each stroke of the brush.