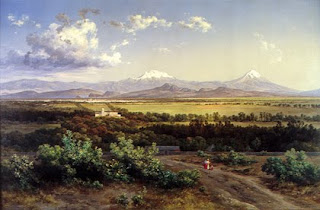 Jose Maria Velasco was a Mexican landscape artist who lived from 1840 through 1912. He was born in Temascalcingo, but moved to Mexico City when his father passed away in 1846. Velasco's interest in art began at an early age and lead him to enroll in the Art Academy of San Carlos. Throughout his lifetime, Velasco was highly recognized for his artwork, winning prizes and awards. After he moved to La Villa Guadalupe in 1874, he began his set of paintings the Valley of Mexico which were praised at the Philadelphia Centennial Exhibition (1976). Although Velasco worked with different kinds of media, and experimented with impressionism and watercolor, he also made drawings. His drawing style portrayed landscapes of plants and rocks, ruins from native populations described in detailed and fine lines and strokes.
I chose this artist because he connected with nature, and through his drawings exposed the beauty of the ruins and remnants of the people in Mexico as well as the country itself. He left a legacy by painting and because he has been so acclamated, he represents Latin American art.