I must admit I’m really quite ignorant when it comes to art. I have never researched artists and their art before and have really no clue how the different periods lend their influence to their work. So going through the books in Lily library really was quite an experience. It was difficult to concentrate on the drawings of artists as most books focused on paintings instead. Most of the drawings were also really sketchy and didn’t have the intricate detailing that all the paintings had. I absolutely love strong lines and rather defined drawings that incorporate the tiniest of details. Hence I chose Jacques Louis David. To me, his drawings incorporated a nice mix of the hard lines and the strong dark shading that really made his work stand out for me. He doesn’t seem to be afraid to making the dark marks that make his work rather bold. David’s attention to precision detail and structure also make his work rather “exact” and life-like, which I enjoy.

Jacques-Louis David (30 August 1748, – 29 December 1825, ) was the leader of the French neoclassical movement.He was born in to a well-to-do bourgeois family, who placed him in the studio of famous rococo painter Francois Boucher. In 1775 he moved on to study ancient architectural monuments, marble reliefs and freestanding statues under Joseph Marie Vien in , a painter who was attracted instead to antiquity. In 1771, David won second prize in the Prix de Rome competition, but it was not until 3 years later after much mental frustration, that he won first prize with his painting: Antiochus Dying for the Love of Stratonice. He was admitted to the in 1783 with his painting Andromache by the Body of Hector.

He was an outspoken political support and espoused the cause of the French Revolution, making him effectively a dictator of the arts under the . Imprisoned after Robespierre’s fall from power, Jacques emerged a more politically shrewd painter and aligned himself yet again with Napoleon when he came to power; acting willingly as his artistic spokesman. David executed a number of portraits of the emperor, the most notable of which is probably that entitled Bonaparte Crossing the St. Bernard Pass (1800), in which Napoleon was idealized in physical stature and romanticized as the effortless man of action.He also made paintings of many colossal scenes treating specific episodes of his rein including the Coronation of Napoleon and Josephine.

With Napoleon’s defeat at , David tried to retreat into quiet seclusion, but his earlier political affiliation, and actions during the French Revolution obstructed his plans. He was declared persona non grata and fled to . He settled in and continued to paint until his death in 1825. His ashes were denied in and he was buried amidst great pomp in the of – Gudule in .

Jacques Louis David early turned his back on the frivolous rococo manner, looking instead to antiquity for inspiration. He sought to reduce classical principles to their barest essentials. David had a clear understanding of the classical principles underlying the styles of the Renaissance and the Baroque periods. His work was highly influenced by the Roman style and was soon thoroughly imbued with the tenets of classicism.

David’s paintings reflect a strong interest in archeological exactitude in the depiction of figures and settings. His work carefully calculates the severity of composition and its emphasis on a sculptural harness of precise drawing, which he saw as more important than colour, which often contributed to the severity of the situations he loved depicting.

When the revolution was in full swing, David for a time abandoned his classical approach and began to paint scenes describing contemporary events, among them the unfinished Oath of the (1791).

He also concentrated on making portraits of the martyred heroes of the fight for freedom, including the Death of Marat (1793) and Death of Joseph Bara (1794), with a rather strong sense of realism. He was in fact at his best as a portraitist. Some of his portraits were executed with such directness and summarized the studied elegance of the neoclassical age with much perfection. 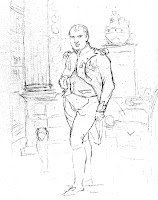