Although Auguste Rodin is most famous for being a great sculptor, he was also a prolific draughtsman, who created over 9000 sketches and watercolors. Rodin did not simply use drawing as an aid to assist him in sculpture. For Rodin, drawing was a form of art expression in its own right that allowed him to closely study the true form and naturalness of the human body.

Rodin was born into a working class family in Paris on November 12, 1840. As a child, he attended the Ecole Impériale Spéciale de Dessin et de Mathematiques, where he was trained in the traditional methods of French eighteenth-century art. Because he was not admitted to the Ecole des Beaux-Arts, Rodin became an apprentice to the sculptor Albert-Ernest Carrier Belleuse. It was during this time that he learned to sculpt and began creating his own sculptures. In 1876, Rodin toured France and Italy, where he saw numerous gothic cathedrals and Michelangelo’s sculptures, both of which greatly influenced and inspired his own art work. By 1880, he had become a well-known sculptor in France, exhibiting frequently in the Paris Salons and receiving many commissions. Although much of his work is highly allegorical, including his masterpiece The Gates of Hell, Rodin focused increasingly on capturing human expression and movement, often through erotic subject matter, as his artistic career progressed. An examples of this later style is his sculpture Eternal Spring. Despite facing much controversy over his work, Rodin continued to be a successful artist until his death in 1917. Today, his sculptures and drawings are exhibited around the world in museums such as the Metropolitan Museum of Art, the Musée Rodin, and the Musée d’Orsay.

Rodin has a unique drawing style and technique. Unlike many sculptors, he did not simply use drawings as visual aids for his sculptures; he considered drawing to be a valuable form of artistic expression on its own—one that was particularly suited to experimentation and the study of the human form, both of which fascinated Rodin.

In his drawings, Rodin main objective is to capture what he termed “nature,” the human form as it appears in reality, spontaneous and unposed. In order to do this, he relied heavily on observation and line. When drawing a figure, Rodin would keep his eyes fixed on the model, not looking at the paper until after the drawing was finished. He never erased and did not concern himself with composition, balance, or proportion. Instead, he focused on finding “the line of the nude,” the essence of the model’s gesture or movement, by making quick contour drawings filled with restated lines.

The result of this drawing method is a series of figures that are often disproportionate, stylized, or simplified but convey a great sense of movement. This movement in turn creates a sense of freeness, energy, and liveliness. The “naturalness” and “truth” that Rodin desires to capture are grounded in these qualities. His drawings are true to reality not because they accurately depict the human body, but because they accurately depict its movement and, consequently, the emotion and life expressed through it.

Rodin’s drawing style is not only highly expressive, but also highly experimental. Over his artistic career, his line quality, use of color, and use of value changed constantly. The result of this is that he successfully captures a variety of different movements, forms, and emotions. Rodin was also not afraid to experiment with his sketches by working into them with watercolor, tracing over them, cutting them apart, and making collages with them. Because Rodin experimented often with different drawing styles and techniques, he did not limit what he was able to capture and express through his art. 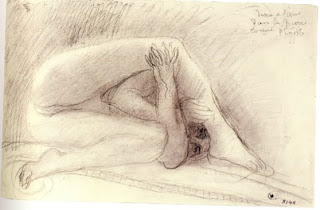 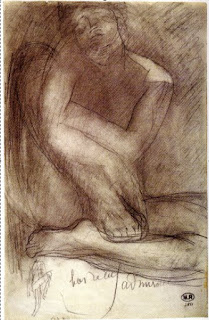 Both Like Egypt and Admirable Relief demonstrate how Rodin uses line to accurately capture gesture. The lines vary in width and heaviness, giving the figures weight and helping to define their as forms. The curves of the lines help to capture and highlight the contours and nuances of the women’s bodies. Also, many of the lines, particularly those in the feet and hands are restated, helping to convey movement. The drawings are filled with emotion and are highly expressive because of the way in which Rodin uses line to capture gesture. 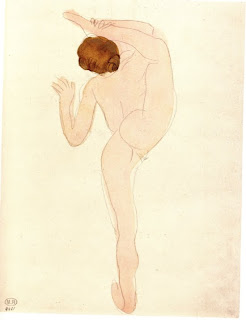 Psyche illustrates how Rodin focused on accurately depicting movement rather than proportion and detail. Rodin only draws what is essential to capturing the woman’s gesture. Details, such as fingers or toes, are either completely omitted or only simply indicated. In addition, many of the body’s contours and angles are exaggerated in a way that makes them seem disproportionate or awkward. In spite of this, Rodin successfully gives an accurate depiction of the human figure because he successfully depicts its movement. 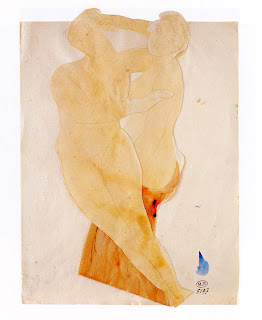 Two women embracing is an example of how Rodin experiments with his drawings. To create this drawing, Rodin added watercolor to two sketches of women he did, cut them out, and pasted them together. When displayed as one drawing, these two sketches take on new, different meanings. This drawing demonstrates how experimentation increases what we are capable of expressing through art.

Why I Chose Rodin

I decided to write about Auguste Rodin for my blog post after watching Camille Claudel, a biographical movie about Camille Claudel, a famous French sculptress who was Rodin’s apprentice and mistress, for a French assignment. At one point in the movie, Rodin and Claudel discuss Rodin’s sketches. I was familiar with his sculptures but not with his drawings. So, when they were mentioned in the movie, I grew curious to see them. When I finally saw some of Rodin’s sketches, I fell in love with his expressive and energetic use of line. I did more research on Rodin and realized there is a lot that we can learn about drawing from observation and improving our drawing skills by studying his work.

Posted by Stephanie Vara at 3:31 PM