The French neoclassical painter Jacques-Louis David was born in Paris on August 30, 1748 into a family of merchants and tradesmen (Nanteuil 7). Throughout his life, David ascended to the forefront of French art and politics to become the most influential artist of the French Revolution, and is one of my favorite artists because his works employ refined neoclassical technique and composition to depict both classical and contemporary subjects, incorporating dignified classical themes while still representing the passion and emotion of the scenes. During the artist’s early years, French art was moving away from the frivolity of the Rococo style and towards a more dignified classical revival, a transition reflected in David’s neoclassical works. Jacques-Louis David entered the Royal Academy in 1766 where he mastered painting technique, later traveling to Rome for five years, during which time he was exposed to great Italian masterpieces of the Renaissance and the ruins of ancient Rome (Monneret 44). His pilgrimage to Rome influenced the classical subjects of many of his works, including that of the Oath of the Horatii, which depicts the three Horatii brothers of Rome vowing to engage in combat against the Curiatii brothers of Alba (Nanteuil 62). This painting incorporates a tightly geometric configuration that emphasizes the steadfast virility of the brothers; however, the more organic composition of the swooning women balances the emotions of the work. 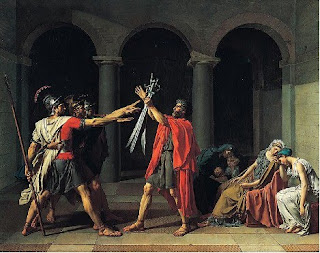 Jaques-Louis David "Oath of the Horatii"
The classical subjects of David’s paintings like The Oath of the Horatii differ from the political subjects of many of his other works; however, many of these politically charged paintings still incorporate classical motifs. For example, David’s painting, The Death of Marat depicts Jean-Paul Marat, a political theorist, journalist, and fiery orator who suffered from a debilitating skin condition which compelled him to spend hours in his bathtub, where he penned many of his fiery compositions. Murdered by his political enemies, Marat became the subject of one of David’s paintings depicted with the same classical mood, setting, and symbolism of David’s paintings such as Andromache Mourning Hector. The artist sees Marat as a symbol of antique virtue; therefore, he depicts the figure as an idealized man with a peaceful, yet somewhat pained, expression and the body of a sturdy man. Just as David’s classical subjects are often depicted clad in simple sheets, adorned with symbols of victory such as laurel wreaths, or surrounded by tokens of their exploits such as swords, helmets, and shields. Similarly, Marat is illustrated with the symbols of his own mission: pen and paper. 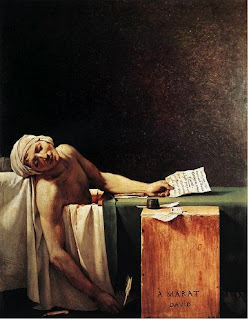 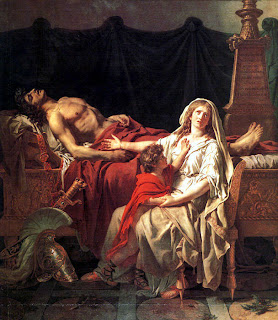 Jacques-Louis David (Left) The Death of Marat (Right) Andromache Mourning Hector
I have included images of both The Death of Marat and Andromache Mourning Hector in order to juxtapose the antique idealism of male virtue rendered by David both in a classical and a contemporary setting. Although many of David’s later works gravitated towards dignified political subjects, such as Napoleon Bonaparte, his final work gracefully depicts the beautify of a more lighthearted classical subject, which recalls the playful mood of the former Rococo movement. Mars Disarmed by Venus and the Three Graces, painted between 1822 and 1824, depicts the Greco-Roman god of war seduced by the goddess of love accompanied by the three Graces and Cupid (Nanteuil 126). I find that the graceful, somewhat theatrical composition, dedicated to the power of Beauty over Force, demonstrates both mastery of technique as well as Jacques-Louis David’s ability to incorporate classical symbols and themes to convey the magnificence of antiquity within this neoclassical painting. Suffering injury and exile, Jacques-Louis David died on December 29, 1825 (Monneret 201). 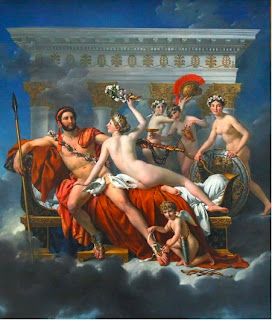