Francisco Goya, both a court painter in Madrid and at the same time a sharp critic of his society and government, is generally described in terms of these two aspects of his artistic life. He is alternatively known for his macabre later works and his unflattering depictions of court life that were ironically commissioned by the royal family. In truth, his catalogue of around 700 paintings, 900 drawings, and several hundred prints are not so easily categorized into neat portraits and grotesques. Born on March 30, 1746 in Spain, Goya's early attempts to enter the Real Academia de Bella Artes were failures and caused the artist to study further in Rome. It was only after 1773 when Goya married his colleague's sister that the artist's larger mural work gained critical attention and prestige. Goya started to build his reputation through the 1780s as a portrait painter and by the end of the decade painted the new royal portraits of the newly acscended Charles IV. After an illness that left him deaf, Goya started incorporating more dark and dramatic themes into his work, especially in his sketches. He published 80 or so sketches entitled Caprichos in 1799, including the famously dreary piece The Sleep of Reason Produces Monsters. 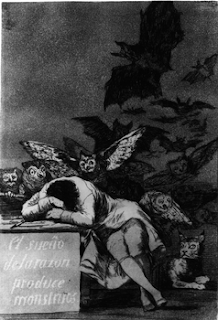 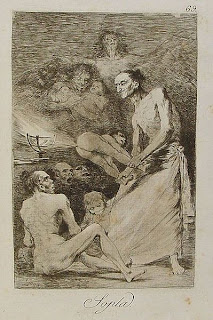 The image above is also found in the Caprichos series and shows Goya's sharp criticism of the culture around him, in his characteristic choppy line and distinct style of shading.

Throughout this time period, Goya continued producing commissions, including the brilliantly subversive Family of Charles IV, which shows the Queen in a position of greater importance and power (by putting her in the spotlight). Although I respect Goya's boldness in painting the court family in such an unfavorable light (and under their very noses), I am more interested in his drawings and prints of societal wrongs and failings in his contemporary society. Many of the Caprichos follow this theme of highlighting issues Goya had with society, as did his Disaster of War prints. Titles from this series (including the aptly named "Why?") show the artist's critical view of war and his willingness to speak out and express his views through art.

Disasters of War "Bury Them and Be Silent" published 1867 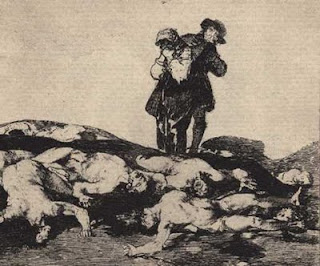 Out of the Spanish painters of the time, Goya especially seemed to regard drawing as a worthwhile art form in itself, and not just as precursors to paintings and etchings. Other pieces from this period of Goya's career that is typically regarded as the "peak" of his artistic prowess and creativity include the famous Third of May 1808. Later works show Goya becoming increasingly withdrawn and drawing increasingly macabre themes. Many of Goya's work is characterized by an expressive Mannerist style that emphasizes dramatic bodies and movement. He has a vigorous pen stroke that adds energy to all of his pieces. Toward the end of his life in the 1820s, Goya became more and more of a recluse and finished off his artistic career with the so-called Black Paintings, epitomized by the gruesome Saturn Eating His Children. 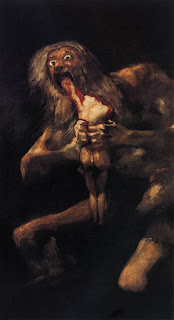