At first, I was a bit hesitant to pick Leonardo Da Vinci as the subject of this particular blog – I thought that perhaps doing so would seem unoriginal. Shouldn’t I be “thinking outside” and exploring artists that I don’t already know?

But then I got to thinking.

What do I really “know” about Da Vinci, other than that over-generalized non-fact that he was the quintessential Renaissance man? Not that much it seemed, so here we go:

Leonardo Da Vinci was born on April 15, 1452 in Vinci (hence Da Vinci… of Vinci) – a region a Florence. Sources agree that he was an illegitimate but not unloved child, but little is actually known about Leonardo’s early life. At the age of fourteen, Da Vinci entered into the apprenticeship of Andrea del Verrocchio – a renowned artist at the time. The artwork produced in Verrochio’s studio was mostly that of his apprentices – and indeed it was during this time that Leonardo’s extraordinary abilities became undeniably clear to a larger public. The story goes that once, in collaboration with his then master Verrocchio, Da Vinci painted an angel in the Verrocchio “Baptism of Christ” – and Da Vinci’s skill proved to be so superior to Verrocchio’s that the latter purportedly laid down his brush and declared that he would never paint again.

The Baptism of Christ: 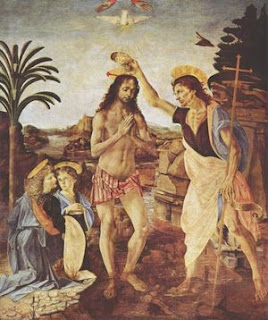 It was da Vinci that painted the blonde angel on the far left, as well as parts of the background. Notice the detailed study of refraction in the light in the gems on the angel’s collar.


In 1477 at the age of 25, da Vinci left Verrocchio’s studio and struck out on his own. In 1482, he entered into the service of the Duke of Milan for his first big commission, “The Adoration of the Magi”:

The Adoration of the Magi 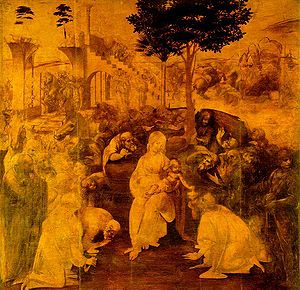 Through this painting, Da Vinci takes steps in developing his use of “chiaroscuro” – the play between light and dark to achieve a sense of volume and three-dimensionality in objects (such as the human body): notice how the figures of Mary and Jesus are extremely bright in comparison to the background of darker chaos. In this case, then, the use of contrast between light and dark has not only a utilitarian purpose (such as the conveying of volume) but also a metaphorical one.

Da Vinci spent nearly 17 years in Milan where he pursued (and excelled in) not only art but also a various subjects ranging from architectural design to engineering. It should also be noted that da Vinci developed the habit of recording all of his studies in “meticulously illustrated notebooks”… or as we may call them, sketchbooks! Scholars have divided the subject matter found in these volumes into four main categories: painting, architecture, the elements of mechanics, and human anatomy. 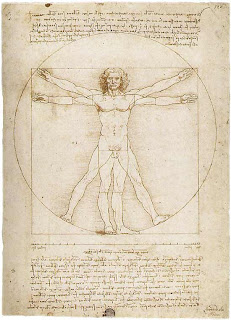 After the invasion of Milan by the French, da Vinci spent the next 16 years or so traveling throughout Italy. Along the way, he met and worked for a number of notable (to say the least) names – Cesare Borgia (whom he traveled with as a military engineer for a stint) and Niccolo Machiavelli – just to name a few. It was in around 1503 that Leonardo reportedly began working what was to become his masterpiece: the “Mona Lisa”. Da Vinci died on May 2, 1519. Legend has it that he died with his last patron, Francis I, by his side, reportedly cradling the great artist’s head in his arms…

… So goes the “story” of Leonardo Da Vinci. Having written what I consider a pretty lengthy summary of what was supposed to be a “short” biography, I realize that I’ve barely even touched the tip of the iceberg when it comes to fully comprehending da Vince as a man and as an artist. What I want to concentrate on now is an idea of da Vinci’s that really spoke to me – and reminded me how important a solid grounding in art is (even in this so called modern/ postmodern/ contemporary…. What is it really? - era).

Da Vinci very critical of the art of Sandro Botticelli – a contemporary – while they were still apprentices under Verrocchio. In his Treatise on Painting, da Vinci remarked that he did some “very sorry landscapes” and that some of these wore merely simple and cursory investigation and no more interesting than the “print made on a wall by a sponge”. On the other hand, however, da Vinci also advises artists to appreciate accidental and random patterns and to observe “walls covered with shapeless stains, in order to excite the mind to various inventions”. What really interested me, though, was the caveat that immediately followed: that this would only be applicable if one was already able to “execute every aspect of the things you whish to depict” - this statement makes me think about the different disciplines art now. And I must say I agree – if you want to rebel, to buck against the conventional rules, I think that first and foremost one must have a complete understanding of the rules themselves. For instance, the impressionists of the 19th century, as well as the famed Picasso – all first had a solid grounding in the technical disciplines of art.