In an attempt to help reduce any artist clashes that might occur on the blog, and to hopefully help mix things up a bit, I chose an artist that not only has two paintings in the Louvre, but also has one of the best forgery collections floating around: Johannes Vermeer (well, Jan or Johan is also acceptable, as well as his baptismal name of Johannis, but maybe we’ll just call him John for now).

Little Johnny was born in 1632 in the South Holland city of Delft (Holland is a wonderfully large chunk of the Netherlands, mind you), and is one of the three greatest Dutch artists of the Dutch Golden Age (1)… But of course, he was a brush not appreciated during his time, so very little is known about his childhood or even apprenticeship (1). To add insult to injury, it is very hard to “outline the development of Vermeer’s work,” (2) as only three of his works are dated. That being so, I’ll just have to do an interpolation and assume that only 3 years of his life were spent painting and during the time leading up to his period of magnificence, he simply enjoyed pretty women and observed men who groped them (as seen in the Matchmaker, 1656).

I jest, of course. It is thought that Vermeer’s painting style and use of themes and techniques, although giving his paintings great artistic weight, meant that he only produced 2-3 paintings a year. His paintings were rediscovered much later, so currently only 31 works can be firmly attributed to his brush. Nonetheless, there are sure to be paintings that were lost, much like any other artist who lived in the pre-1900s. Still – when compared to Remrandt, his productivity was almost abysmal. The book I have in my hands at the moment has a cute little anectode that helps illustrate his approach to his work:

The French Diplomat Balthazar de Monconys came to Delft in 1663, when he also visited Vermeer. Not one of his paintings was to be seen in his studio. To see one of the works he had to go to a Delft baker’s shop (probably Hendrick van Buyten, who possessed four paitings by Vermeer). … As long as his paintings stayed in the houses of Delft, he remained quite unknown. Even so his work was held in high esteem.

So he was a local celebrity, but quite possibly didn’t regard the fame gained in the international circles attainable or desirable. Again, I’m completely going out on a limb here, but maybe he just didn’t want to hear his mother-in-law nag about how Rembrandt was having a ball at the court of Hague and he was near-broke so he kept his professional affairs on the low key and told everyone that he was in the business of sanitation. I don’t know. However, I do know that he was not able to pay his enrollment fee into the guild of St. Luke, so he probably wasn’t doing all that well and that his mother-in-law probably didn’t like him all that much anyway otherwise “she would have surely have advanced him the six guilders.” (4)

Being a sad little husband with no international fame but rump-kicking brush skillz, Johnny’s works turned out to be quite impressive. Most of his paintings have that colorful Dutch realism to them, and thankfully almost all of them are contemporary scenes, unlike what the southern Europeans were doing at the time, maybe because apparently Dutch Calvinism forbade religious paintings in churches so nobody cared to do frescoes. Nonetheless, you’ll see that most of his subjects are women going about their daily routine while he ogles them (he’s only doing it for the art, mind you!).

Let us take a look at one of his paintings at the Metropolitan, for example, The Lady at the Virginals (or The Music Lesson):

The colors in the darker areas might seem a bit off to you at first glance –and they are- but it is thought that this is due to the cleaning process more than the original painting itself. The greenish-bluish tint found in many of Vermeer’s paintings are thought to be the base color showing through after a bad cleaner was done with the painting. Anyhow… You will see that this painting has a great range of value and Vermeer has added inherent richness to many of the darker areas. The main subject stands with her back to us behind obstructing objects and what we expect to be the focal point (the subject) is actually much more faded than the foreground objects. You will also notice that the parts where you would expects a textural richness are much crisper than, say, the the tutor next to the lady. This is probably a result of Vermeer using a technique known as staccato, where the artist uses “a small round brush to give a succesion of staccato touches where he [feels] the need of brilliancy or a suggestion of richness.” (5) If you look at the depth of the picture, you’ll also notice that between the painter and the subject, there is a chair and an additional instrument, as well as a wide-spanning table with some kind of drapery over it. The way in which these are placed and executed so flawlessy hints at Vermeer’s ability to apply perspective to his paintings. I personally think it’s (at least technically) a very well made painting. The composition doesn’t please me all that much, but everything else is very pleasing.

I realize that my commentary has gone on quite a bit more than necessary, so I’ll show a few more paintings and let you off with a few links… The next painting I’ll focus on is one of his world-renown paintings. This painting is also known as the Dutch Mona Lisa due to the similar feeling of the two paintings. Ladies and gentlemen, I present to you, Het Meisje met de Parel, or Girl with a Pearl Earring:

This is a large departure from his other painting involving pearl-adorned jewellery, but it is such a fine and intriguing piece that it is worth mentioning. A few things to notice in this picture (with thanks to the other little book I’m holding in my hands): “the model’s features are inconspicuously simplified, for example in the arcs of the eyelids, in the slim, straight nose, in the way the ridge lines of the nose arch continuously into the eyebrows (as in Archaic Greek sculpture), and perhaps in the exquisite shape of the face overall, which is seen especially in the contour set against the dark background…” (6)

Analyze it however you like, but you cannot escape the fact that the absent-minded stare and the rose-red lips make for a very mesmerizing painting that has a ton of life under a few seemingly simple brush strokes. 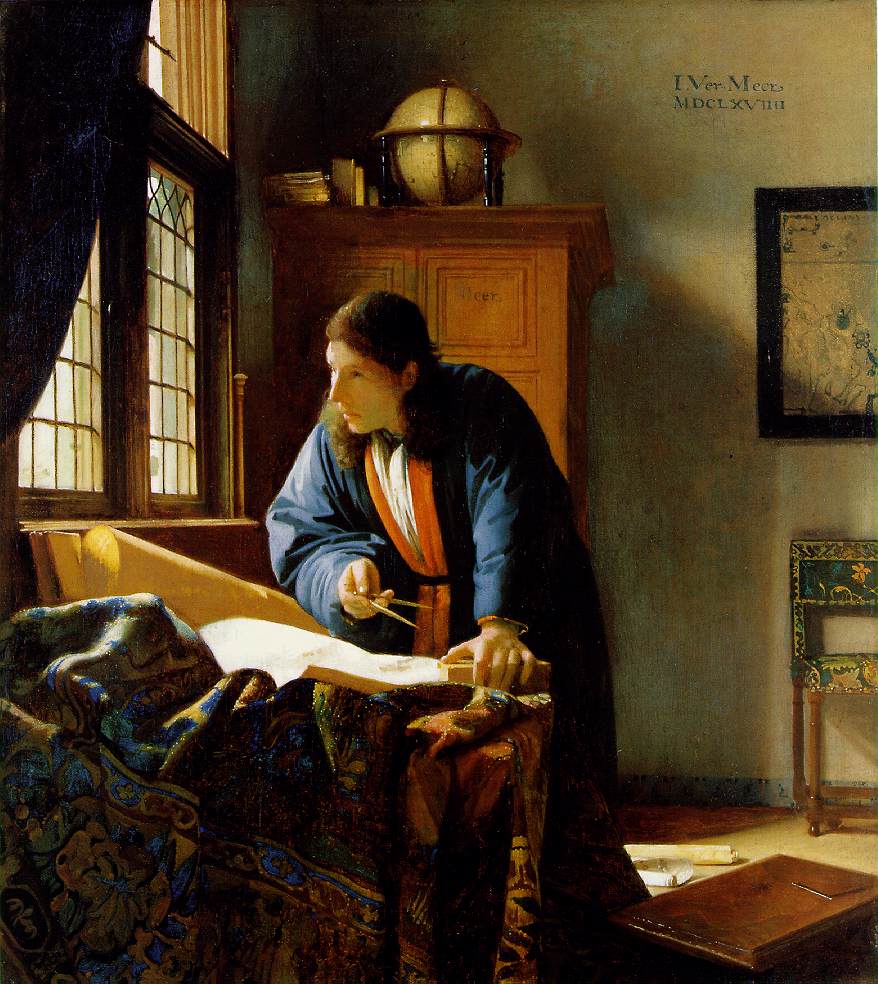 Bellissimo! Simply wonderful, especially in terms of dramatic shading. Just the silky yet heavy richness of the tapestry or whatever that is, and the impeccable execution of the objects on top of the cupboard…

Here’s the last one I’ll add to the body of this post, The Art of Painting:

Just look at the attention to details…. Nice framing as well.

So that was Johnny, or Johannes Vermeer, Sfinx van Delft (the Sphinx of Delft). A great painter largely unknown to his contemporaries.