Georges-Pierre Seurat was born on December 2, 1859 in Paris to an upper middleclass family. As a child, Seurat drew, although nothing really remarkable, and was thought to be encouraged to keep drawing by his uncle. In 1875, he dropped out of school at the age of fifteen and enrolled in a local drawing school in Paris for a little bit before advancing to the École des Beaux-Arts. Due to his privileged financial circumstances, Seurat was at liberty to pursue his art without the pressure to sell any of his artworks to make a profit. That may explain his unhurried nature: he was the last to submit his paintings for exhibition among his contemporaries. 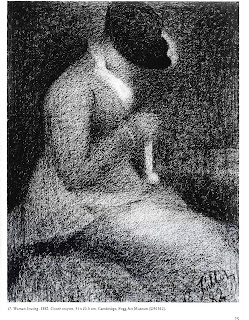 Before painting, Seurat spent several years practicing drawing. He liked to work with conté (a hard and greasy crayon) on Michallet (a brand of “Ingres paper”). When Seurat brushed the conté across the thick paper, the crayon would catch on the tiny microscopic hooks that protruded from the paper, leaving valleys between the hooks untouched. Thus, his choice of mediums lent themselves to a three dimensional image. Furthermore, rather than lines, Seurat was more interested in tonality. Here in Woman Sewing, we can see that there are almost no distinct lines; the detailed tones give depth to this image. There are no hard edges, as spaces seem to blend together to model a soft light falling on the subject. But his canvas is rich in white, grays, and black. He covers every inch of the canvas, leaving hardly any white space to create a richer image as well. His aim was to “construct an ensemble that was unified by tone alone” (Thomson 24). 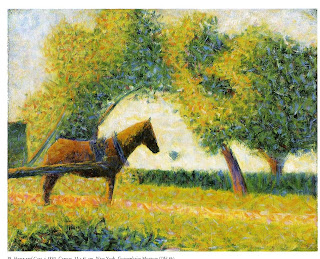 Seurat's interest in tones in his drawings can perhaps be expressed in his attention to colors in his paintings. His three objectives in painting were “the application of the laws of color, controlled handling of paint, and disciplined composition” (Thomson 39). Seurat studied the scientist-writers of Michel Eugène Chevreul and David Sutter, who wrote extensively on theories of light and color. Seurat understood that color-light and color-pigment behaved differently—he knew that paint would not replicate the way things looked in natural circumstances. He experimented extensively with color and played around with complementary pigments because he learned early on that he had to keep his colors separate in order for complementary colors to stand out more.

He needed a suitable brushwork that would enhance the idea of optical mixture. His method became the brushwork of balayé, which was a criss-crossing stroke that he used for most of his career. In Horse and Cart done in 1883, we can see this criss-crossing of the brush and how the colors are very vibrant because of his method of juxtaposition of complementary colors. 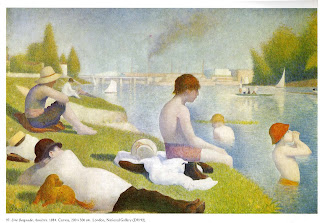 One of his most famous works, Une Baignade, Asnieères, which was his formal debut of painting in 1884, further demonstrates Seurat’s usage of color. His painting had several layers, suggesting that he didn’t know what the end product color would be. 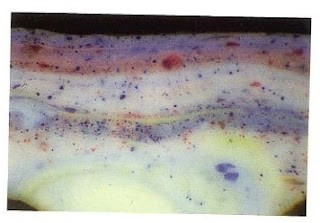 Here, we have a cross-section of the layers of paint used to depict the central seated figure of Une Baignade. We note the superimposition of different colors all played their parts to enhance the overall color tone of his skin. Once again, we note the presence of light and brightness and plein air (outdoors) in the painting, which is characteristic of Impressionism.

It was arguably his most famous work, Un Dimanche à La Grande Jatte completed in 1886, that really catapulted Seurat into the avant-garde of contemporary Impressionism. He helped lead the new movement, which was largely characterized by the use of points (pointillism) to enhance the vibrancy of each individual color. 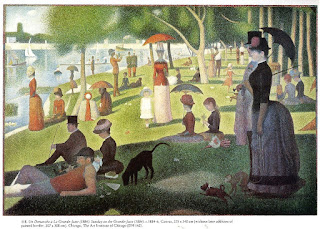 In La Grande Jatte, Seurat began his first layers with sweeping brush strokes before going back and reworking with the addition of points to capture his sensitive observations of color and light. From a distance, the painting itself gives off a sense of deep space as the painter places the viewer in the foreground of deep shadow and draws his gaze towards the distance where it gradually becomes lighter and brighter. Also, the action in this painting takes places in the distance by the boats and water whereas in the foreground, the mood is very still, which again draws us deeper instead of lingering in the foreground.

Between 1886-1888, Seurat actively promoted the group of Neo-Impressionists that included himself, Lucien Pissaro, and Paul Signac through his continued involvement with the Society of Indepdenent Artists, established in 1884. The Society was formed as an outgrowth of the Salon of the Refused formed by earlier Impressionists. They also held dinners and exhibits, which helped the Neo-Impressionists gather momentum and exposure for their movement. Seurat died March 29 1891 from illess but the Neo-Impressionism was carried on by Signac.Here, we have a cross-section of the layers of paint used to depict the central seated figure of Une Baignade. We note the superimposition of different colors all played their parts to enhance the overall color tone of his skin. Once again, we note the presence of light and brightness and plein air (outdoors) in the painting, which is characteristic of Impressionism.

I chose to study Seurat because I was interested in his use of colors, particularly how the image looks different up close and far away. I think pointillism is a unique technique that gives images an optical illusion and is very similar to the idea of modern day pixels—how the blending of just three primary colors can create a myriad rainbow. I’ve always been fascinated by this concept and I think Seurat was a precursor to this technology.

Posted by michellek at 6:07 PM