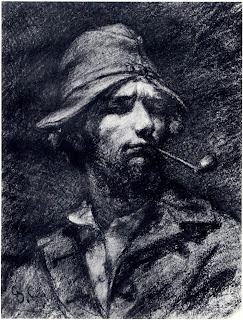 Self-Portrait with Pipe. 1848
Gustave Courbet was an influential Realist painter and rebellious bohemian. He sought to capture the world around him, declaring "painting is an essentially concrete art, and can consist only of representation of real and existing things." He is believed to be the inventor of Realism and actually coined the term, in spite of later claiming he didn't understand the meaning of the word. For long time most formal definitions failed to fully describe realism without mentioning Courbet's work.

Born on June 10, 1819 to a well-off farming family, Courbet was very independent. When he was eighteen he wrote to his parents, who would've preferred he study law, "If I am to be an exception to every rule in every way, I'm off to pursue my destiny," and in 1839 settled in Paris to study art. There, he studied under Steuben and Hesse until he left to work on creating his own style. He studied the works of masters from various countries, analyzing and copying their paintings. He decided to pursue greater recognition with a larger painting, one that would prove his worth as an artist. In 1849, he received a gold medal for After Dinner at Ornans at the Salon exhibition in Paris. However, he truly gained the art world's attention and criticism with A Burial at Ornans. This painting depicted an ordinary funeral in a small town without the poetic uplifting feel to which art patrons of the time were accustomed and on a scale reserved for history paintings. A few of his other painting were also received as scandalously, including Young Ladies of the Village and The Bathers.

Courbet seemed accustomed to his seat in the center of controversy. He was the first artist to sponsor his own self-financed exhibitions. When offered a knighthood cross in the French Legion of Honor, he refused. In 1871 he was blamed for the destruction of the Vendôme Column during his participation in the political riots. He was sent to prison for six months, after which he fled to Switzerland, where he died on December 31, 1877. 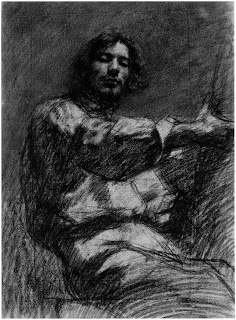 The Artist Seated at His Easel. 1847
I chose these first two drawings because air of confidence they present. Courbet uses expressive lines and dark lighting to convey a more relaxed feel than most self-portraits prior to his work. These two were part of a series of self-portraits that Courbet considered almost an autobiography. 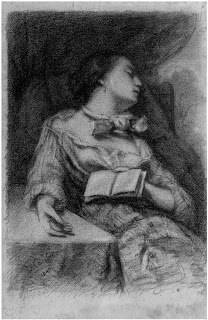 The Sleeping Reader. 1849
This drawing contrasts the various textures, and dark value of the background serves to bring the subject more attention. This drawing played to Courbet's favorite themes, interrupted activity or misdemeanor.