Hieronymus Bosch was born as Jeroen Anthoniszoon van Aken around 1450 in ‘s-Hertogenbosch, Netherlands. As several members of his family were involved in painting, he followed suit and joined the family business. He gained success with his artwork and when he died in 1516 notices of his death referred to him as a “very famous painter.” While little is known about the life of Bosch or precisely what he was trying to say with the fantastic images found in his artwork, modern scholars accept his work as conveying religious and moral messages. His style of loose brushwork and use of shocking, monstrous images is unique enough to set him apart from any other artist of his time period. Indeed, Bosch’s work has no equal throughout the history of art. Bosch is fascinating to me and his interpretations of the sinfulness of humanity and the (very gruesome) consequences of sinful actions remind me of much later 20th century surrealism.

One of Bosch’s most famous w 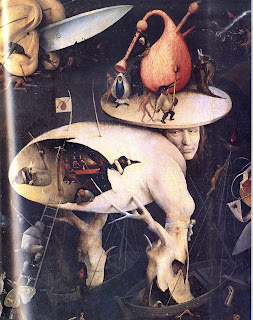 orks, The Garden of Earthly Delights, depicts the fall of Man in the Garden of Eden. The triptych is full of striking images of demons, monsters, and various odd and disgusting acts. Here is a detail of the painting that I found intriguing mostly because I found another image of a drawing Bosch did before painting this "Tree Man." 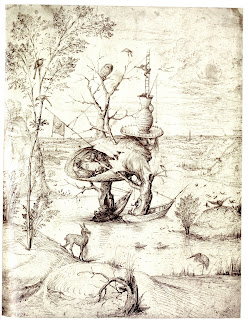 This is "Tree Man," a drawing done by Bosch. As is shown in the detail above, the image was modified and later painted into "The Garden of Earthly Delights." I like this because it illuminates the process Bosch used to create his fantastic paintings. It's amazing to me that a 15th century artist during the time of strictly religious painting could take such overused themes and motifs and make them into something so bizarre and fantastic.

Pen and Brown Ink on Paper 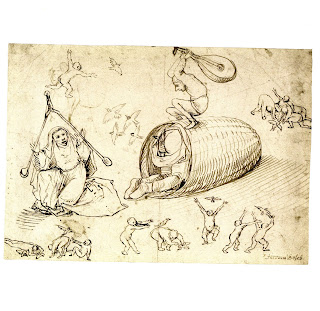 I chose this because it was one of the most offensive and hilarious images I could find of Bosch's work. "Droller with beehive" depicts a man hiding in a beehive with his pants down and birds flying out of his anus. Another man is shown beating the man's rear end with a lute while babies frolic about chasing birds and an old woman watches while clutching a pair of fire tongs over her head. Supposedly the drawing is symbolic of several deadly sins, including gluttony and greed.

Pen and Brown Ink on paper

Posted by Lelizanders at 1:35 PM