Yves Tanguy was a French surrealist painter who rose to prominence in the late 1930s - and was purportedly the only one of the great surrealist painters to be completely self-taught. Tanguy's moment of catalyst, as is most widely purported, was his 1923 discovery of a Giorgio de chirico painting in a gallery window. Apparently this encounter with Chirico's work prompted Tanguy to start producing his own pieces, albeit nascent and undeveloped at first but still full of promise: "This was done in a fairly naive Expressionist style but in which flashes of fantasy could also be glimpsed" (MoMA).
In December 1925, Tanguy he joined the Surrealist movement to whose fundamental tenet he devoted himself - Automatism - a movement which he became a leading figure. (Automatism - the automatic writing/drawing practiced by surrealists that can be compared to the improvisation of free jazz). In fact, an interesting thing to note about Tanguy is that he almost never made preliminary "planning" sketches for his works because he felt that doing so would leave little room for exploration, adventure and pleasure if the painter's task was "limited to colouring in outlines already drawn on canvas".

In some of his early work, however, like: Mama, Papa is Wounded! (1927), concrete indications of personal style were beginning to emerge:

A critic's certain reading of of Yves Tanguy's Mama, Papa is Wounded (1927), in which the "biomorphic forms of this landscape are seen as "reminiscent of the dolmen-shaped war memorials ... that now populated the Breton countryside." Supposedly, it rendered to the viewer a "wounded body of France," - albeit rendered in such a "cryptic way as to suggest that those memories of war are unwanted and repressed". Personally, I derive a sense of somberness from the piece.
Tanguy also worked on a series sometimes termed "beach" pictures - pieces that convey a sense of metaphysicality and the banality of immediate experience: 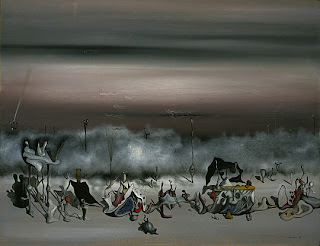 Tanguy began to concentrate his attention not on the space but on the figures emerging from it and on the links between them - as shown by The Ribbon of Excess (1932; ex-Roland Penrose priv. col., London, see 1982 exh. cat., p. 107) show above...
Tanguy married fellow Surreal artist Kay Sage in 1940 - and became a naturalized citizen of the United States a time during which his work went through further changes. In the 1950's, "the atmosphere of Tanguy’s pictures became steeped in a sense of anguish even more penetrating than before, with cathedrals and obelisk-like shapes in desolate expanses beneath storm-threatened skies." Consider one of Tanguy's final works the "Multiplication of Arches" in which an "inexorable sea of stones" invade the canvas, connoting said ambience of threat and anguish: 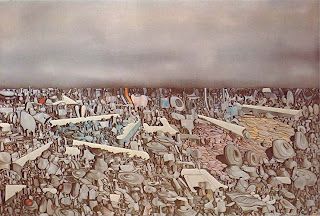