As one of the most prolific illustrators and artists of the 20th century, Norman Rockwell captured the essence of America in his works. He chronicled two world wars, civil rights movement era, and the advent of new technologies such as radio, automobiles, and rocketships. Because most of his works were intended for mass production, he is remarked as more of a commercial artist than illustrator, but he was always truthful in his paintings: what he chronicled really did exist though he may have chosen to concentrate on certain, lighter more humorous aspects. He admitted to depicting “Life as I would like to be” (46).

Rockwell was born on February 3, 1894 to a modest family in New York City. His relationship with his family was distant, harboring few childhood memories. Growing up skinny and awkward, he discovered his knack for art and turned to drawing as an outlet for the unhappiness in his own life. He attended the Chase School of Fine and Applied Arts and later was accepted into the Art Students League in 1910. Under the instruction of teachers like George Bridgeman and well-known illustrator Thomas Fogarty, Rockwell learned practical as well as “old-time” techniques of illustration.

At the age of 18, Rockwell scored his first job as an illustrator while still a teenager, and in 1913, he was offered the post of an art editor for Boy’s Life, which was the magazine for Boy Scouts of America. This began a life-long association with the Boy Scouts, including 50 years of illustrations their calendars. Despite this early success, Rockwell had his eye on something greater.

He began presenting ideas to editor of the Saturday Evening Post, George Horace Lorimer and his first Post cover was published on May 20, 1916 when he was just 22. This began a steady post for Rockwell, who continued illustrating their covers for over 47 years. Around the time of his first publications in the Post, Rockwell got married to schoolteacher Irene O’Connor, but the couple divorced in 1830. That same year, he married Mary Barstow, another schoolteacher, with whom he had three sons: Jarvis, Tom, and Peter. Interestingly, after Mary died in 1959, he married yet another school teacher Mary (Molly) Punderson in 1961.

Aside from work for the Boy Scouts and the Post, Rockwell also did illustrations for stories such as Mark Twain’s Adventures of Tom Sawyer and The Adventures of Huckleberry Finn, and Louisa May Alcott’s Little Women. For all of these, he would visit the actual sites of these stories to provide factual insight, which sparked a focus in his work on small-town life. Rockwell was always interested the mundane; he revealed, “The commonplaces of America are to me the richest subjects in art” (33). His focus on everyday people and happenings helps people to relate to his works and stir their interest in art, especially in times when art was snobbish and considered for the upper class to appreciate only.

In 1963, Rockwell parted ways with the Post and began commission with Look magazine, which allowed him to explore new genres. He was always interested in civil rights issues, but working for the Post had put constraints on how he would treat colored subjects. Submitting for Look, Rockwell created images like The Problem We All Live With published in January 1964. 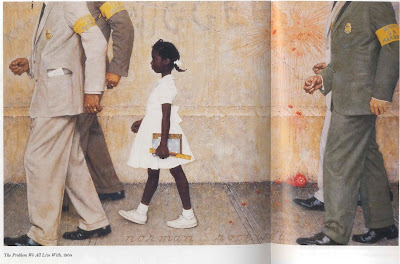 This is a great example of his ability to narrate a story so powerfully through imagery. The central figure, the innocent school girl, is charged with such emotion and commands our attention. Rockwell always strove to represent America in his images, something many people could relate to. In this painting, we can see the heavy racial tension during the era of integration and the profound relatibility of this issue as he shares this moment with viewers.

Rockwell’s process was a traditional one. He strayed from the modern avante-garde that had its roots in France, and stayed true to the naturalist style throughout his career. With the innovation of photography, Rockwell was able to use photographs instead of real-life models, which allowed him greater flexibility. It required about 50 shots per painting. Afterwards, he would begin in charcoal to create a black-and-white illustration to study the contrast of tones and values. Then he make a small study painting in color, about the size of the actual magazine to gain an overall impression. He would finally move on to the final canvas in color, usually using oils. He started with a base layer in a single color, usually mars violet as it accentuated the light and aroused a sense of warmth in the final painting. 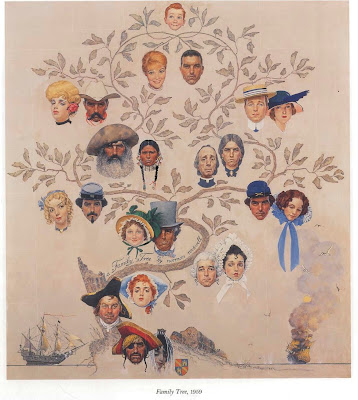 Rockwell worked tirelessly to produce the effects he desired. He defined himself by dedication to details and accuracy. For example, in Family Tree, he rubbed dirt on the painting and sandpapered it to achieve the feeling of old and weathered. He cared a lot about the entire effect of the illustration. 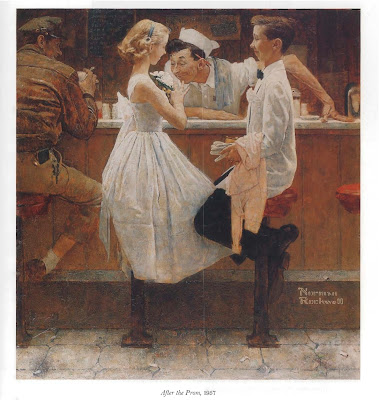 One of my favorites of his pieces is After the Prom (1957). This piece really highlights Rockwell’s style of drawing focus to the center of action: the youthful prom dates and the counter worker. The cluster of white captures our immediate gaze and holds our attention as we uncover the narrative that Rockwell has created. Although they are not the center of attention, the rest of the work is not ignored. On the right we have what looks like some type of war veteran, shadowed in darker hues, but his presence signifies Rockwell acknowledgement of the current affairs at the time. This is a careful juxtaposition of a happy memory alongside darker realities. 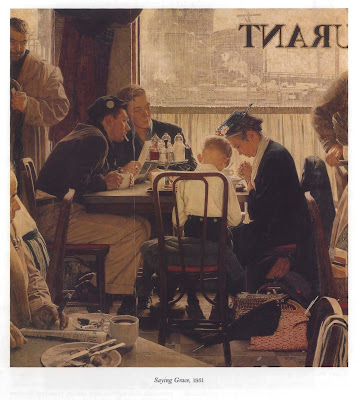 Another one of my favorites is Saying Grace (1951). Again, I love how he draws us to the center with light and the attention to detail, especially in the facial expressions of the older woman and the two young men. There are many different elements in this painting, yet they all come together to guide us to the center. Despite the fact that most of his works would be published on a small scale (on the cover of magazines as opposed to a large canvas), it strikes me that Rockwell put some much detail into his subjects. It really shows that Rockwell was an artists concerned with the entire image.

I chose Norman Rockwell because he makes his art so relatable. Using his narrative art form and naturalism, he creates these scenes that could be happening to anyone—in a sense they’re timeless. I like how he has chronicled America’s rich history not just by big events such as wars or events but also by the ordinary activities of everyday life. In this way, he has provided a richer culture.

All material came from: