Basquiat was born in Brooklyn, New York. His mother, Matilde, was Puerto Rican and his father, Gerard Basquiat, is an accountant of Haitian origin. Because of his parents' nationalities, Basquiat was fluent in French, Spanish, and English from an early age. At an early age, Basquiat displayed an aptitude for art and was encouraged by his mother to draw, paint and to participate in other art-related activities. In 1977, when he was 17, Basquiat and his friend Al Diaz started spray-painting graffiti art on buildings in lower Manhattan, adding the infamous signature of "SAMO" (i.e., "same old shit") In December 1978, the Village Voice published an article about the writings.The SAMO project ended with the epitaph "SAMO IS DEAD" written on the walls of SoHo buildings.

Basquiat first started to gain recognition as an artist in June 1980, when he participated in The Times Square Show, a multi-artist exhibition, sponsored by Collaborative Projects Incorporated (Colab) and Fashion Moda. By 1982, Basquiat was showing regularly, and alongside Julian Schnabel, David Salle, Francesco Clemente and Enzo Cucchi, became part of what was called the Neo-expressionist movement. He started dating an aspiring and then-unknown performer named Madonna in the fall of 1982. That same year, Basquiat met Andy Warhol, with whom he collaborated extensively in 1984-6, forging a close, if strained, friendship. He was also briefly involved with artist David Bowes.

By 1984, many of Basquiat's friends were concerned about his excessive drug use and increasingly erratic behavior, including signs of paranoia. Basquiat had developed a very serious cocaine and heroin habit by this point, which started from his early years living among the junkies and street artists in New York's underground. On February 10, 1985, Basquiat appeared on the cover of The New York Times Magazine in a feature entitled "New Art, New Money: The Marketing of an American Artist". As Basquiat's international success heightened, his works were shown in solo exhibitions across Europe and the USA.

Basquiat died accidentally of mixed-drug toxicity (he had been combining cocaine and heroin, often using cocaine to stay up all night painting and then using heroin in the morning to fall asleep) at his 57 Great Jones Street loft/studio in 1988, several days before what would have been Basquiat's second trip to the Côte d'Ivoire. He was just 27 years old.

Per Capita
1981. Acrylic and oil paintstick on canvas. The Stephanie and Peter Brant Foundation, Greenwich, Connecticut

The phrase "per capita" means "to each person." When combined with the numbers shown here, it could refer to how much income a person earns in a year. 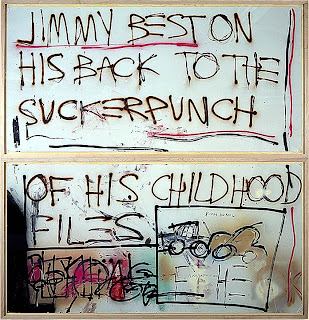 Although Jimmy Best... is painted on a piece of metal, it is similar to some of the graffiti that Basquiat wrote on city walls. Throughout his career, Basquiat often painted on everyday objects that were near at hand, such as old doors and windows, pieces of picket fences, and even football helmets.


Basquiat lists the average per capita income in different states in a way that emphasizes the inequality between the rich and the poor. Themes of social justice, involving issues of racism, materialism, and exploitation, recur in Basquiat's art. He often created critical oppositions within his paintings by sharply contrasting poverty with wealth or integration with segregation. 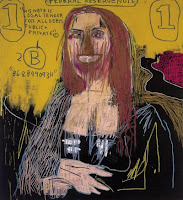 © The Estate of Jean-Michel Basquiat

This work seems to be Basquiat's answer to Warhol's Dollar Bill and Mona Lisa paintings. Basquiat usually paints large fields of colour by applying broad brush strokes with acrylic paint, while drawing and writing in oil stick. This pattern applies to the orange top part of this painting. The portrait at centre, however, has hair, skin and parts of the bust filled-in with repeated oil stick lines. Leonardo's Mona Lisa seems to grow into the dollar note at top, obscuring what would be the face of George Washington. Art and money are two different currencies, even different worlds, which can be converted only with difficulty. The uncompromising and urgent way the artist spent the money he made is legend. In this painting he lets us know that although he loved money his ultimate faith lay in art.