Maurits Cornelis Escher was a famous graphic artist who focused on lithographs, woodcuts, drawings and sketches. He was born in the Netherlands in 1898. As a child, he did horrible in school and failed out of most of his classes. He flunked arithmetic and algebra, but found an interest in geometry. Although he did not do well in class, his keen sense of shapes and fascination with geometry is apparent in his art work later in life. In 1919, he attended the Haarlem School of Architecture and Decorative Arts to study graphic art, where he excelled in art but failed most of his other classes. Professor Samuel Jesserum de Mesquita enlighted Escher that graphic art was very suitable for him and encouraged him to begin wood cutting.

Early in his life, Escher focused on landscapes at odd perspectives.
In 1922, Escher traveled to Italy and Spain where he gained inspiration for wood cuts and in the regular division of the plane, noteably a 14th century morish castle, The Alhambra Palace, that he visit in Spain. In 1936, he visited this palace again, and this time it sparked an interest in order and symetry, stating that it was ”the richest source of inspiration I have every tapped”. In 1958, Escher took a turn in his style and began to focus on two dementional planes where he could express infinity. Escher showed an interest in writing and math as well. He wrote his first paper, “Regular Division of the Plane with Asymmetric Congruent Polygons”, in 1941 about his mathematical approach to his artwork. In 1958, another one of his papers was published: “Regular Division of the Pane”.

Escher was given a number of unique awards throughout his career. First, he was awarded the Knighthood of the Order of Orange Nassau in 1955 and in 1985, an asteroid was named after him, 4444 Escher.

Escher focused on perspective, architecture, and impossible spaces. He quotes “The things I want to express are beautiful and pure” and “I don’t grow up. In me is the child of my early days.” These quotes express Escher’s quarky side that is evident in his work. His style incorperates his own, almost child-like fantasies to go along with pure, realistic observations of the real world. He tried diligently to make his art work mathmatically perfect. This proofing and perfection brought much satisfaction to Escher.

One style that Escher mastered was ‘the Regular Division of a Plane’. This consisted of symetrical drawings of one figure that is repeated over and over again. His inspiration of Regular Division of a Plane came from the Moor’s decorations on the walls and floors of the Alhambra in Spain. As you can see in his woodcut print, Horsemen (1946), it is a asyemetric, mirror images of the one figure of the horseman, alternating dark and light. This tequnique makes it appear as if the horses are proceding in a certain direction, oppostie of eachother. Together, all of the horsemen are able to fill the space symetrically and completely. He carried on this style in his carvings of beech wood spheres. 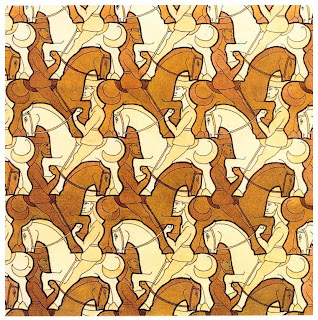 When traveling in Italy, Escher created realistic pieces, one being a lithograph Castrovalva (1930). In this piece, he masters the use of space, illustrating deep and near space and low and high space. He has the weeds and plants in the forground, and mountains in the back ground with the walkway and village connecting the two. He also has an even smaller village in the background. 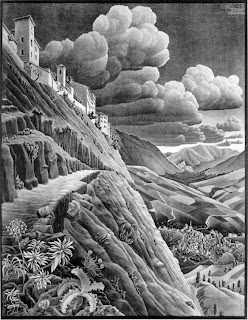 Escher liked to express images in his mind in his work as opposed to ordinary direct observation. This is evident in his drawing, Ascending and Descending. He takes perspective and perception to a whole new level in his creation of the ‘impossible to create’ staircase structure. In this structure, people are ascending and descending the infinante loop of stairs at the same time. 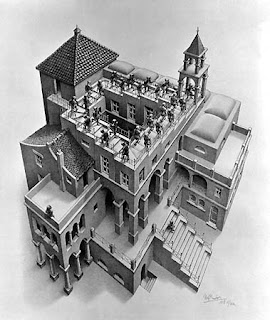