Born on July 5, 1940 with undiagnosed dyslexia, Chuck Close had great difficulty staying on task in classes, specifically history and geography. He could not remember what he read, so Close was forced to develop creative, artistic ways of thinking to compensate for his lack of retention. As a result of his disability, Close became single-minded. All he wanted to do was art. Close claims that his “learning problems not only led him to pursue a career in art, but also were crucial in defining his distinctive artistic style". He would use art to show his teachers that he was not indolent. “If I couldn’t pass a test on Lewis and Clark, I’d do a 20-foot mural of the Lewis and Clark trail, every stop on the trail fully illustrated to show the teacher that I was interested and that I cared”. Throughout his school years, Close became accustomed to pursuing all sorts of extra-credit projects in order to keep up with his fellow classmates. Art continued to “save” him all the way through college, attending Everett Junior College in Washington and then Yale University.
At Yale, his artistic style began to flourish. Close had created a distinct technique for his artwork; he would take a photograph and then paint the photo on an enormous scale. Over the years, Close’s “heads” have progressively become larger and larger, and sometimes more “real yet more unreal”. Originally, he was noted for his uncanny ability to reflect detail. His 9-foot recreations of headshots looked like an exact magnification of the original photo. However, many of his later paintings appear as pixilated representations of a portrait. From far away, the portrait appears to be a head, though, the closer you move, the more abstract the painting becomes. From an up-close view, the head may as well be “a formalist landscape of colors and patterns” . Close describes that as a result of his dyslexia; he could not tell what a face looked like unless it had been flattened. “That’s why the photograph works for me. In real life, if I saw you again tomorrow, I would have no idea I had seen you before” . Close’s portraits, which are inspired by headshots he himself had taken, have become as widely recognizable as Andy Warhol’s vivid colors.
On December 7, 1988, Close was struck with yet another disability. He was attending a ceremony in New York to honor local artists when he had a sudden sharp pain in his back. As the pain continued to intensify, Close staggered off the podium and walked across the street to the Beth Israel Medical Center. There, he suffered a 20 minute seizure. The doctors concluded that he suffered from a collapsed spinal artery. He woke from his seizure to find that he was paralyzed from the shoulders down.
Not surprisingly, painting was a major part of Close’s physical rehabilitation program, “art therapy” they called it. Close’s assistant, Michael Volonakis, would prepare the paints and set up the canvas. Towards the beginning of rehab, he resorted to painting with the paint brush between his teeth. As a result of intense physical therapy, Close gained enough strength in his arm to control his custom designed splint, which was velcro-strapped to his right arm and had a holder for the brush located at the top. Volonakis began by first supporting his arm from below and soon became the object of Close’s frustration. With each new guided stroke, Close would yell “more green, more yellow, less white!” Volonakis would calmly listen and do his best to satisfy the distraught Close. Although Close has little recollection of any depression following the accident, Volonakis describes Close as sometimes weeping while working on a painting
“There’s no big difference in the work really,” said Close, “except maybe emotionally. I’d say it’s a little more emotional now, a little more celebratory.” Close continued to gather strength and was soon able to independently continue his passion for art. Now in a wheelchair, he still paints with a brush attached to his splint, as he cannot move his fingers. He has invested in a 9 feet squared frame for which he uses motorized foot pedals to bring different areas into his sight.
I picked Chuck Close because his art has a certain depth to it that is captivating. His style is unique ad attention drawing. Although the image may look “connected”, the portraits continue to become “more real yet unreal”. Going beyond the pixilated appearance, Close’s portraits have become even more abstract, yet defined. Each section which originally looked like a single pixel, has now become an abstract design in itself, mostly a design of concurrent circles. Although each pixel appears to be a design, the colors which he uses within each pixel, create the image of a face when viewed from far away. He creates a sort of mosaic effect with different colored paint rather than glass. The most obvious transition of Close’s style is viewed in his series of self-portraits. His self portraits prior to the accident were exact replications of his face, his self portraits now are a conundrum of colors. Over the years, Close's works have evolved from harsh black-and-white, realistic, images to colorful and brightly patterned canvases of abstract style. 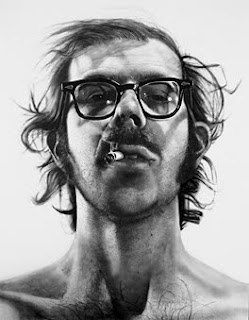 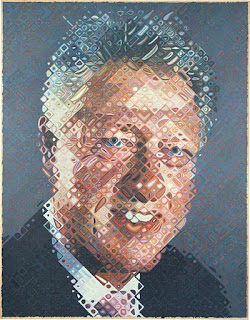