Banksy is a graffiti artist from Bristol, England (maybe) born in 1974 (maybe). His identity is a closely guarded secret so biographical details are sparse and possibly just internet rumors. I did find an article claiming to reveal his identity in the Daily Mail, but I personally doubt the veracity of the claim, if only to keep the mystery alive. He started doing graffiti around the age of 13 or 14 and moved to stencils because they take less time to paint, and thus make for less time to get caught. He supposedly came upon the idea to switch to stenciling while running from the police and finding a stenciled serial number on the train he was hiding under. A common theme in his graffiti is rats, which according to an alleged interview he liked because they could actually be on the street and are meant to symbolize the triumph of the little people and unloved. A lot of his work isn't just spray paint on walls, like for one sculpture left on a sidewalk of a bleeding telephone booth with an axe in it. A lot of his work isn't just on the streets. He has held exhibitions, and some of his paintings have made their way into world-renowned art museums, though not with their permission. Rather than go through all the hassle of submitting a work and getting having it reviewed and possibly chosen, he simply hung his own painting in the museums, some of which went unnoticed for a few days. He managed to hang his own version of the Mona Lisa with a smiley face instead in the Louvre, and also hit the Metropolitan Museum, Museum of Modern Art (MoMA), The Brooklyn Museum and the American Museum of Natural History in New York and a few others in Britain. He also made a nine paintings on the Palestinian side of the West Bank Barrier, depicting, for example a hole in the wall with a pristine beach on the other side and a girl holding balloons floating over the wall. 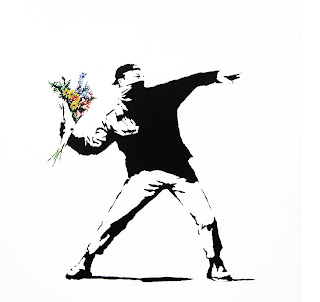 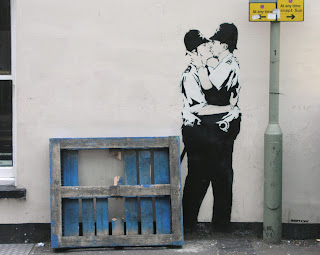 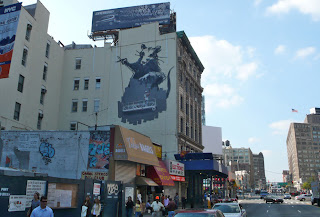 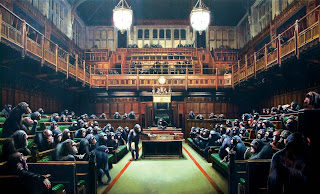