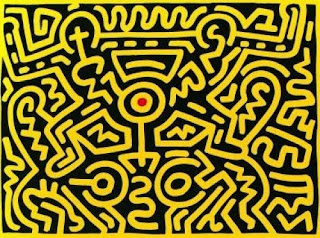 Keith Harding (1958-1998) was an artist and social activist that contributed art to New York City street culture during the 1980’s. At the age of 19 Harding moved to New York City took classes at the School of Visual Arts and became fascinated with graffiti art. He started expressing his street art within subway stations and drew with chalk so authorities would not reprimand him. People became very familiar with his artistic style and he gained a large audience by displaying his work across Ney York subways. Keith developed great relationships with artists in the New York Area such as Jean Michel Basquiat and Andy Warhol. His relationship with such influential artists inspired him to produce art on printed canvas.
Painting above top left: (Growing) 1988 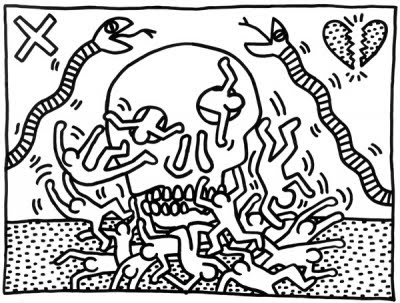 (Without Title) 1983
In 1985 the museum of modern art in Bordeaux displayed his canvas paintings and became a part of the Paris Bicentennial. Harding’s fame continued to rise and he eventually became an important piece to pop culture, as he was featured on MTV and commissioned to design Madonna’s concert costumes. He painted Grace Jones’s body for her music video “I’m not Perfect” and designed a lot of concert flyers for popular artists. In 1986 Harding opened a shop that sold merchandise that exhibited his art. Most of the items sold in the store carried socio-political messages that discussed topics concerning AIDS awareness, the apartheid movement, and the crack-cocaine epidemic. 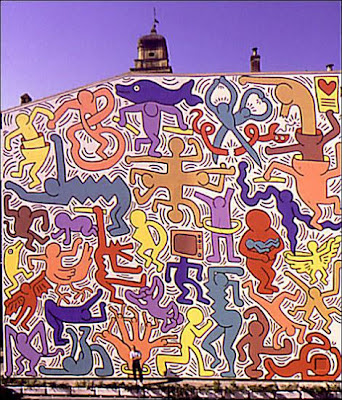 Bold lines and bright colors were integral to Keith's designs. His art work infiltrated pop culture during the eighties and was influential to social activist movements. Keith Haring was openly gay and contributed a lot to the gay right movement. He was responsible for funding many other social awarness campaigns and inspired many people to support those in need across the nation. Keith haring passed away in 1998 from AIDS, however the Keith Haring foundation is still active today and works to make the world a better place each day.

Posted by Elisabeth Sloan at 1:45 PM