Although I was aware of Frida Kahlo as a surrealist Mexican artist, it was only after watching a a 2002 film adaptation of her life recently that I was exposed to the history that revealed the true ingeniousness of her creations. Inspired by her life, I wanted to study more of her works. Although known primarily as a painter, she also produced many drawings and sketches throughout her life.

Born in 1907 to a Hungarian-Jewish father and a mother of Spanish and Mexican Indian descent, Kahlo did not initially plan to become an artist. However, her original dreams to become a doctor were interrupted by a near-fatal bus accident that left her physically disabled for the rest of her life. While convalescing, she started seeking haven in drawing. 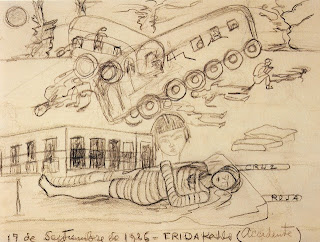 This sketch of the accident is in the style of traditional Mexican religious works of art, which portray scenes of miraculous interventions. Kahlo expresses the miracle of her life in this drawing: her survival from the accident. The moment of impact is depicted with an out-of-control tram smashing into the bus Kohla was on. The crushed bodies beneath the bus represent the passengers that were killed in the accident. Kohla represents herself in two ways in this sketch: one is through a disembodied head floating above her injured body as a witness of the accident and the other lying down in a plaster cast, seriously injured. A sense of chaos and devastation is translated through the haphazard land unstable line. 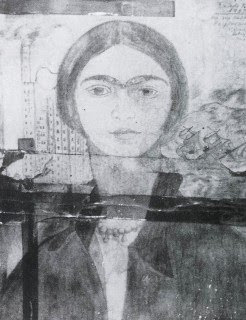 Titled as “The First Drawing of My Life,” this drawing stood out to me as I could see similarities with the surrealist self-portrait that I had recently finished for this drawing class. As the title indicates, this drawing tells the story of her life as a young lady through different symbols she incorporated into the portrait. Having a similar approach as Kahlo’s, I also wanted to capture more than just a simple portrait representing a single moment in time. Around the period Kahlo worked on this drawing, Mexico was becoming increasingly industrial and she reflects how she feels about such large-scale changes in the portrait. The work transmits the coldness and desolation of seemingly foreign urban landscape in the distance through the simple square structures and the lack of value used in describing the background. 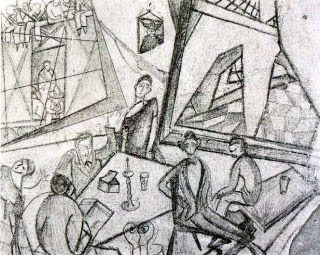 After recovering from her accident, she became involved with politics, following revolutionary ideas and rediscovering her Mexican roots. As one of the artists who embraced “estridentismo,” a movement in Mexico that saw a need to increase social awareness and rebel against the system, she was very politically motivated and active. Politics had big influence on her art in the later years as she desired to transform her works into something useful for the Communist revolutionary movement. Very detailed and complex, this cubist style sketch represents one of the meetings held by those who embraced “estridentismo” to discuss their ideas. Kahlo portrayed herself in the center with a portrait of the revolutionary leader Pancho Villa directly above her.

The genuineness found in Frida Kahlo's works evokes a sense of common humanity. It is also awe-inspiring to see how the reality of one's life can be accurately represented in the most surreal and unusual ways. I believe that it is her passion for life and the personal stories she shares in her works that have captivated her audience from all over the world to this day.

(of drawings, below each images)