Although Egon Schiele had a very brief artistic career, cut short by his premature death at 28, he is a highly regarded and influential artist in today’s art world. While this is due to several different reasons, his ability to develop a unique, distinctive style and his unmatched skill as a draughtsman have played a major role in establishing his position as a world renowned artist and a leader of the Austrian Expressionist movement.

Schiele was born in 1890 in Tulln, Austria. Even as a child he showed great interest in drawing and, consequently, enrolled in the Wiener Kunstgewerbeschule, a progressive Viennese art school, in 1906. However, because of his great proficiency and talent, the professors at the kunstgewerbeschule soon encouraged him to attend the more traditional Akademie der Bildenden Künste, where he studied with the painter Christian Griepenkerl. Frustrated with the extremely conservative methods of the school, Schiele and a number of young, avant-garde artists, including Anton Peschka, left the school in 1909 to exhibit together as the Neukunstgruppe.

By 1909, Schiele had also established a close relationship with the famous Austrian Painter Gustav Klimt and was working under Klimt’s guidance.

In the summer of 1911, Schiele moved to Neulengbach on the outskirts of Vienna with his girlfriend, Wally Neuzil. However, the townspeople there were scandalized by Schiele’s art and unconventional lifestyle. As a result, they arrested him for supposedly seducing a young girl and imprisoned him for 24 days on the charge that he displayed his “immoral” drawings in the presence of children.

Schiele and Wally returned to Vienna in the fall of 1912, and Schiele’s artwork began to garner public recognition. His work was exhibited in a number of international exhibitions, and he received many commissions.

By the end of 1915, several dramatic changes had taken place in Schiele’s life. First, he left Wally and married Edith Harms. After separating from Wally, Schiele’s work began to exhibit more positive undertones and feelings. But soon after his marriage, Schiele was called for military service in World War I; he served as a guard for Prussian prisoners of war.

Schiele returned to Vienna in 1917, where he began once again to devote all his time to his artwork and continued to gain more recognition. However, on October 31, 1918, Schiele died of Spanish Influenza.

Though his first works clearly evidence the influences of his mentors, in particular Gustav Klimt, Schiele was able to develop a distinctive and personal style remarkably early in his artistic career. While his drawing style grew more realistic over time, it remained highly expressionistic and energetic. Through his drawing technique, most notably his manipulation of perspective, composition, and line. Schiele honestly portrays the emotions and humanity of his subjects. This consequently allows him to explore deep, psychological themes in his art, including sexuality, immortality, and death.

A major characteristic of Schiele’s drawing style is his revolutionary use of perspective, evident in his drawing Lovers. Schiele often drew from an elevated perspective and chose reclining poses for his models. This technique creates extreme foreshortening, making his figures seem distorted even when they are correctly proportioned. Foreshortening and distortion also work to make Schiele’s figures appear gaunt, twisted, and awkward; these impressions are essential in illustrating themes such as the frailty and brevity of human life, as well as in giving Schiele’s art a voyeuristic quality. 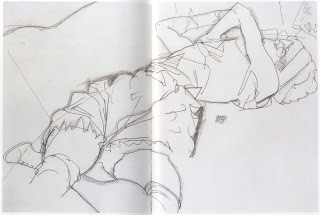 Schiele’s unique compositions, which use both traditional and untraditional techniques, are also essential to his works and the messages they convey. His compositions are traditional in that they form verticals, horizontals, diagonal, crosses, triangles, and other patterns that draw the viewer’s eye into the piece, move the viewer’s eye throughout it, and often times force the viewer to focus on particular details. However, Schiele’s compositions are also unconventional because of the way he crops his figures. He purposely leaves extremities, such as hands and feet, that should be visible, unfinished. In addition, he sometimes places his figures so that their limbs are cropped in unusual places by the edges of the plane. These techniques give the drawings a sense of awkwardness and spontaneity, which, in turn, create a sense of liveliness and energy. Schiele also leaves the majority of his backgrounds as empty, negative spaces that highlight his subjects’ solitude and isolation. Schiele’s Self-Portrait from 1911 is an excellent example of all these compositional techniques. 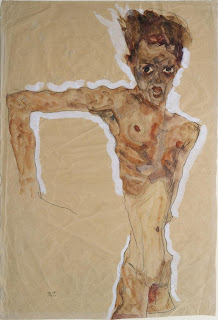 Gouache, watercolor, and pencil with white heightening on paper.

One skill that Schiele is most commended for is his mastery of line. Line variation is essential to the appearances of his drawings, such as Seated Semi-nude, as well as to the many feelings that they evoke. Schiele uses thicker lines to describe large areas and thinner lines to describe smaller details. His lines curve where he describes the softness or roundness of a particular figure or object. But at times they are stiff and angular, creating feelings such as tension and anxiety. Schiele also restates lines to highlight certain areas of his drawings and give them a sense of movement or energy. While his lines vary greatly in width, darkness, and straightness, they are always bold, spontaneous, and energetic. Additionally, the appearance of the lines greatly contributes to the mood of the piece, making his drawing highly expressive. 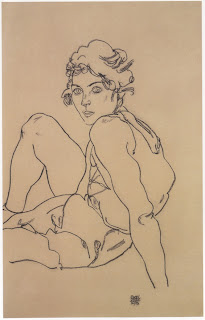 While Schiele was certainly talented, that is not the only reason why he was such a skillful artist. He continuously practiced drawing from observation; in less than a decade, he produced thousands of figure drawings. Furthermore, Schiele was confident and fearless in his drawing. He was willing to use challenging perspectives, never erased, and constantly experimented without worrying about making mistakes. This approach to drawing was essential in helping Schiele become a great draughtsman, and it sets a good example for us as we learn to draw; Schiele teaches us that if we want to improve our drawing skills, we must constantly practice and take risks.

WHY I CHOSE SCHIELE

I decided to write by blog post about egon Schiele because he is one of my absolute favorite artists. I really admire how his paintings and drawings capture so much energy and feeling, particularly through his use of line. Because his drawings are highly figurative but at the same time highly expressive, I think Schiele is a wonderful artist to look, study, and use as inspiration.

Posted by Stephanie Vara at 2:16 PM