Edward Hopper’s paintings have always fascinated me. Something about his style connects with me in a way I’ve never quite been able to figure out. His paintings burn, leave an afterimage blazing in front of my eyes even after I’ve looked away. The juxtaposition of clear cut shapes, familiar settings, and bright colors with solitary figures and the theme of isolation make his paintings haunting, like a plastic Ronald McDonald waving from the bench of a local fast-food restaurant. They’re artificial, familiar, real, alive and dead all at the same time.

I found a book, “The Complete Oil Paintings of Edward Hopper” and thought it would be a good place to look for images I liked. I started flipping through the pages and found more than just a mass of pictures. They were ordered, chronologically, and I smiled to myself as I saw Hopper mature as an artist right before my eyes. I laughed a little when I calculated that the first painting in the book was done when Hopper was only 13 years old. It was pretty well-done, even if the signature in the corner was a little bit large and sloppy. There it was, this early fascination with nature, then the time of art school with nudes and portraits abound, then his traveling time (where in Paris he flirted with impressionism a bit before finally starting to look like the Hopper we all know), then his time back in New England and New York, when his style became consistent and clear.

Edward Hopper was born on July 22, 1882 in Nyack, New York, a town about 25 miles outside of New York City. He went to Correspondence School of Illustrating in New York in 1900, but then transferred to the New York School of Art after one year. After traveling to Europe a few times from 1906-1910 he moved to a Greenwich Village, rented the top floor apartment at 3 Washington Square North and never moved or went abroad again. As an artist Hopper’s life was filled with disappointment. Until he was 40 he only sold one painting and was forced to support himself by doing commercial illustration. Knowing this, it’s no wonder his work reflects themes of familiarity and isolation. 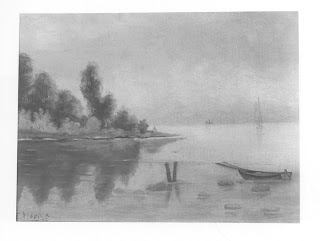 “Rowboat in a Rocky Cave” 1895. This is the first known oil painting of Edward Hopper, done when he was only 13 years old. I chose to show it because it makes me smile that he was so talented and aware of detail at his age. 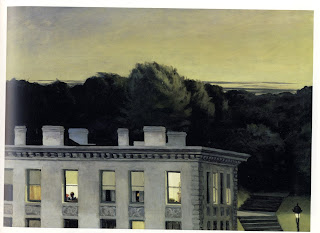 “Houses at Dusk” 1935. There’s something comforting about the loneliness presented in this painting. Perhaps it is the figure, safe inside her own individual room, “isolated” from the isolation in a sense. 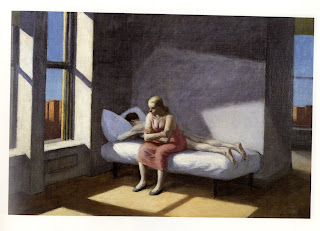 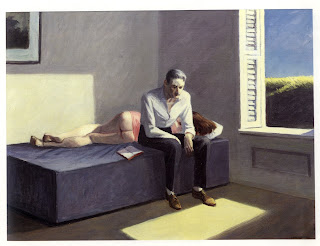 "Summer in the City" 1949 (top) "Excursion into Philosophy" 1959 (bottom) I wanted to put the next two paintings together because I find it interesting that the subject matter is the same. In both paintings we see a fully clothed, awake person sitting on a bed with sun streaming in through the windows while a naked figure of the opposite sex lies asleep on the same bed, face hidden. In both paintings one can presume some sort of sexual activity has happened during the night, but why are the figures so pensive, somber, bored and fully clothed? According to notes taken by Lloyd Goodrich, the curator of the Whitney Museum of American Art, while assembling "The Complete Oil Paintings," the book the man is reading is Plato, and it is "reread too late." Jo, his wife, wrote to Goodrich of this painting, saying "It may be that Edward won't stand for naming the new picture 'Excursion into Philosophy.' You know E. Hopper. He'll call it 'Sunlight on the Floor' or something." :)