Artists of the 20th century were unfortunate enough to live through perhaps the most destructive and violent century mankind has ever known with the advent of global war, trench warfare, and mind-blowingly destructive weapons. Otto Dix was born in 1891 in Unternhaus, Germany and produced art through the two world wars. As a young man, Dix volunteered for the German army during World War I. From there, his eagerness quickly turned to cynicism as he observed and documented the horrors of war and the destruction upon the human psyche. A fascinating quotation from him details his commitment to realism and experiencing as much as he can: “I had to see all that for myself. I'm such a realist, you know, that I have to see everything with my own eyes in order to confirm that it's like that. I have to experience all the ghastly, bottomless depths for life for myself; it's for that reason that I went to war, and for that reason I volunteered,” (1). By the end of the war, he had risen up through the ranks to earn an Iron Cross, but his political ideas and views toward war had turned increasingly leftist and pacifist. His early famous works all capture scenes from the battlefield, including The Trench (1924) and a book of etchings titled The War. 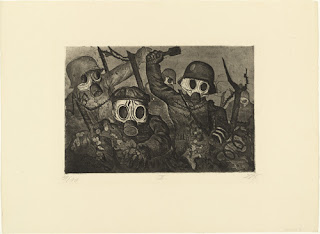 Dix made it clear to critics and the public alike that war was a grotesque business, one that he as a veteran could not support after his first-hand experience. These anti-war sentiments became increasingly controversial as Hitler gained in popularity, and Dix was eventually fired from his job as an art teacher at the Dresden Academy and labeled a “degenerate artist” by the new regime. To be an artist in Nazi Germany, one had to have membership in a tightly controlled union and restrict output to innocuous images such as landscapes. Dix continued to paint, although he occasionally snuck in covert criticisms of the Nazis and war, such as in Flanders. A good deal of Dix’s work deals with war, understandably, as this period in his life produced profound psychological for him: “All art is exorcism ... I painted many things, war too, nightmares too, horrible things ... Painting is the effort to produce order; order in yourself. There is much chaos in me,” (2). I thought this quotation is pretty incredible, as it points to the therapeutic nature of art and the role it can play in life, even in cases less extreme than Dix's. 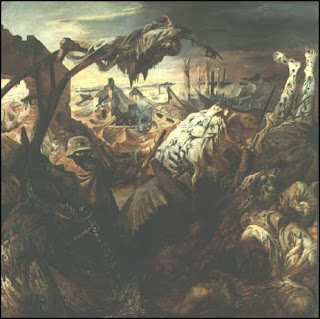 Apart from pioneering art as a form of anti-war therapy and awareness, Dix also created innovative techniques in painting. He used the same thin-glaze technique of old masters, however he mixed tempura and oil to create subtle shades and ensure his paintings had lasting durability. This layering technique, although tedious, also ensured that his expressive paintings had that much more gruesome power. 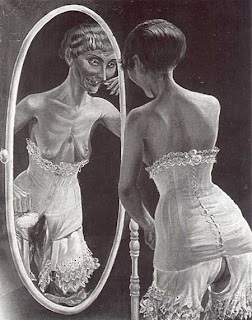 This portrait of a journalist especially showcases Dix's glazing and layering technique, which mirrors that of older styles, but is powerful still when dealing with current and "expressionist" subject matter. The subtlety of shades and tints gives the journalist more of a shadowy, mysterious, almost sickly appearance. The artist passed away in 1969. 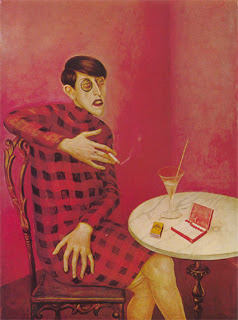