Lucian Freud was born on December 8, 1922 in Berlin, Germany. His parents were Ernst and Lucie Freud, and Lucian was named after his mother. His grandfather was the famous psychologist Sigmund Freud (Bernard 8). In 1933 he and his family moved to England after Adolf Hitler became Germany’s chancellor. In England he attended boarding school at Dartington Hall. After two years, Freud began studying at Bryanston. At that time he began completing his first oil paintings and carvings, and soon enrolled in art school at the Central School of Art in Holborn. He later studied art at the East Anglican School of Art in Dedham (Bernard 9). In 1944 a number of his paintings were displayed in the respected Alex Reid and Lefevre Gallery. His works’ subject matter was often portraits, still lives (frequently featuring dead birds), and plants (Bernard 11).

Over time Freud’s work began to focus increasingly on the portrait (Bernard 11). Friends and family were frequently used as the subjects of his paintings, including his mother and his wife (Bernard 13-15). Freud is famously quoted as saying, “My work is purely autobiographical. It is about myself and my surroundings” (qtd. in Feaver 35). Freud’s work has also extensively explored both the male and female nude (Bernard 17-18). In addition to paintings, Freud has also produced countless etchings and drawings (Bernard 21).

Art critic Robert Hughes famously named Lucian Freud as “the greatest living realist painter” (qtd. in Conrad). Much of Freud’s work depicts the human body in a powerfully realistic manner, for his objective is “biological truth-telling” (qtd. in Conrad). As Bruce Bernard describes, “Freud has examined the male genitalia, as he has done the female, with greater concentration, and painted them in greater detail than anyone before him” (Bernard 17-18). 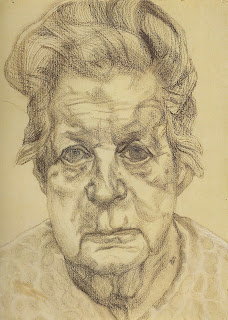 This drawing is one of many pieces that focus on Freud’s mother. Entitled “The Painter’s Mother,” it was drawn with charcoal and pastel in 1983. Bruce Bernard describes Freud’s pieces on his mother: “No painter has ever conveyed a more sustained expression of intimate concern for an elderly person than Freud has done in this unprecedented series” (Bernard 15). 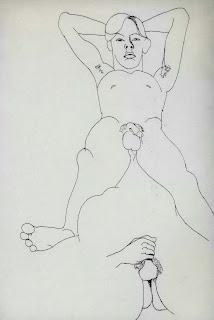 This drawing, entitled “Boy on a Bed,” was drawn using pen and ink in 1943. It exemplifies the “anatomical frankness” with which Freud depicts both male and female genitalia (Bernard 17). 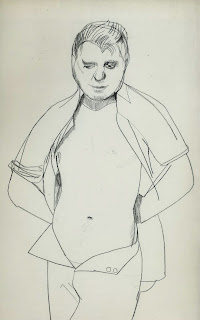 This drawing, entitled “Francis Bacon,” was drawn using pencil in 1952. Bacon and Freud were friends who used each other as subjects in their artwork (Feaver 26).

One matter to note is the titles of Freud’s work. As these drawings indicate, they are rather simple titles for Freud believes, “The only point of titles on the whole is to distinguish one picture from another” (qtd. in Feaver 25).


I chose to write about the artist Lucian Freud because I had heard that Sigmund Freud’s grandson was a brilliant artist but had been unfamiliar with his work. As I researched Lucian Freud for this assignment, I found his artwork to be quite impressive. I thought it was interesting how he depicts the human body in such a realistic manner.


Note: All drawings were scanned from the book edited by Bruce Bernard and Derek Birdsall.
Posted by Lauren Weinberger at 7:26 PM