While most artists traditionally seek to preserve their works for as long as possible, some modern artists have been moving in the direction of art that is transient. Among these artists is Kurt Wenner, a street artist that paints with a chalk/pastel mixture on pavement. His unique 3D approach to traditional street art has helped ignite a renaissance in this classic Italian art form. The original practice is believed to have started in the 16th century in Italy, and was practiced by traveling folk artists across Europe. 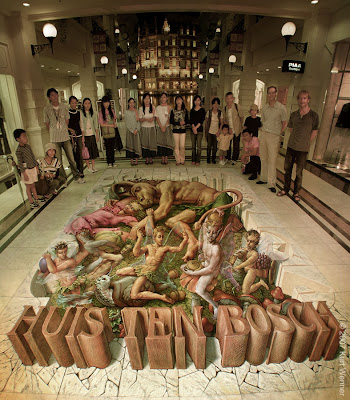 Wenner has a solid background in graphic design and fine arts, having attended both Rhode Island School of Design and Art Center College of Design, two of the nation's preeminent art institutions. From school, Wenner worked with NASA designing futuristic scenes as an advanced scientific space illustrator. Eventually he took a leap of faith, quit his job, and went to study art further in Rome. There he picked up a style typical of the Renaissance, a style that resonates through his street art. With his unique blend of classic training in Rome with a scientific background, as well as the highly technical education he received in the US, Wenner managed to create an exciting new artform named illusionistic, or anamorphic, street painting. 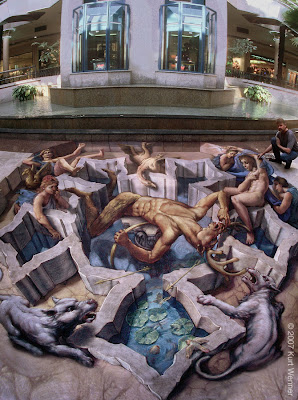 From a set viewpoint, his pieces look as if they are literally popping out of the ground. This requires a fascinating blend of technical skill and modern theories on perspective that I think is really innovative. According to Snopes.com, Wenner sold his first piece at 16 and was earning a living as a graphic artist at a measly 17. In a business where established, experienced artists struggle financially from producing art alone, accomplishing this feat before finishing high school is impressive indeed. Wenner even creates his own medium. He mixes his chalk/pastel himself to create an optimum mix of low-cost chalk with high-quality pastel. His artists statement details a bit of his process: "Wenner adjusted this geometry to create compositions that seemed to rise from and fall into the ground. In anamorphic perspective, painted forms appear as three-dimensional when viewed from one point in space. Wenner created a special pictorial geometry that corrected the specific distortion caused by viewing his large images at an oblique angle." 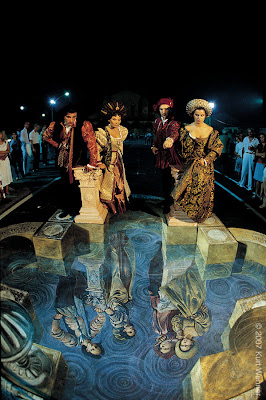 Reflections
Another aspect of this art that is really interesting is how temporary it is. The integrity of the piece starts deteriorating right when Wenner finishes, and is always subject to environmental factors and traffic. In his Q&A section, Wenner posits an interesting philosophy on the transience of his work: "I'm not disappointed when it washes away because street painting is performance art; it's very much like attending a symphony. When the music ends everyone leaves with a memory of the music. My work is the same except one is left with a visual impression." While bittersweet when the piece fades (especially with the amount of work each piece requires), the temporary nature of the chalk-paintings make them all the more exciting when they are in their full glory. 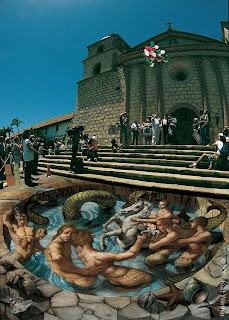 Sources:
(1) www.kurtwenner.com (see the Artist statement, galleries, and Q&A)
(2) http://www.snopes.com/photos/arts/sidewalk.asp (Apparently some people did not believe the pictures were real. Snopes was called in to verify.)
Posted by Kathie at 8:24 PM