Wangechi Mutu is a Brooklyn-based artist, whose illustrious works engage with provocative themes that stem from her African roots.  Born in Nairobi, Kenya in 1972, Mutu jumped at the chance to leave her native country at the early age of 16, when she moved to Wales to attend high school.  She ultimately relocated to the United States, where she earned her B.F.A. at Cooper Union in New York.  After obtaining a Master of Fine Arts degree from Yale in 2000, Mutu settled in Brooklyn where she currently resides and works. 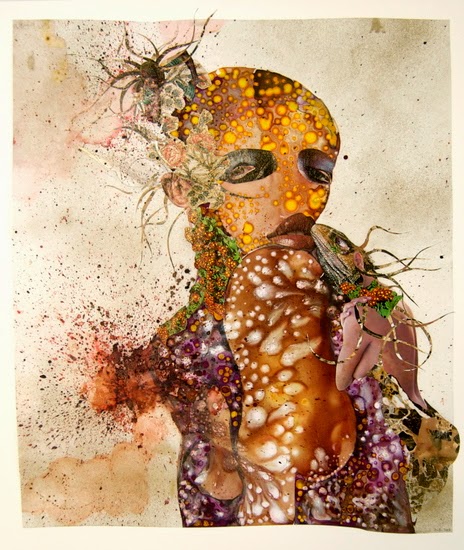 Despite her residence in America, Mutu has not lost sight of her African heritage. Her works criticize western stereotypes of Africa as primal and exotic, and utilize the female body – often erotically – as a vehicle for expressing such ideas.  She is best known for her multi-media collages of fantastical, futuristic worlds that combine readymade materials with magazine cutouts.  She utilizes this hybrid medium to express the meaning of fractured identities – the notion of being torn apart and pieced back together. The result is twofold: while her canvases are strikingly textured and alluringly beautiful, the significance behind them is quite disturbing.  The figures that inhabit such compositions are equally dichotomous, as they are both exquisite and grotesque. These images address deep social issues such as colonialism and displacement, racism and ethnic profiling, and violence and war. 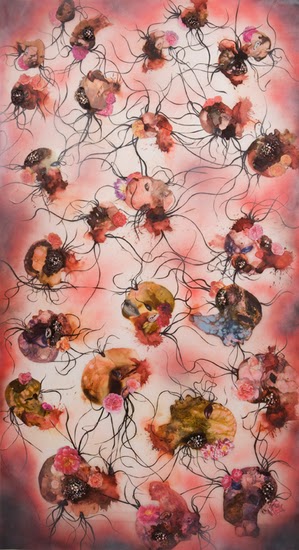 I was first introduced to Wangechi Mutu during my sophomore year at Duke University, when her work was featured in a solo exhibition at the Nasher Museum of Art. This exhibit, titled “A Fantastic Journey,” was comprised of over 50 pieces dating from the mid 1990s to the present, and included a variety of mediums such as collage, drawing, video, and site-specific installation.  I had the privilege of helping install this exhibition, and found myself completely enamored by the artist’s spectacular collages. 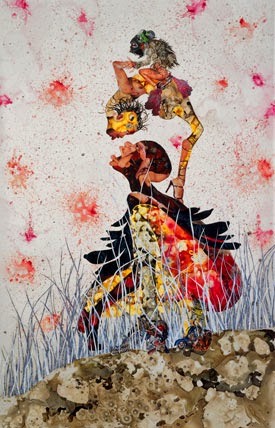 One of my favorite pieces in this exhibition was Mutu’s 2005 Misguided Little Unforgivable Hierarchies.  The large canvas is dominated by two female figures, the larger of which is squatting in a primal, sexual pose. Her facial expression is erotically charged – head tilted back and lips parted – and upon closer examination, we can see that her face is composed of women’s body parts taken from magazine cutouts. Mutu often illustrates her females in this provocative manner to highlight stereotypes of African women as sexual, reproductive beings.  A smaller figure in high heels stands above the squatting female. The image speaks to power dynamics and social hierarchies, and criticizes human stratification based on constructed racial categories. Red splotches of paint in the background symbolize the blood, violence, and the wounds suffered by Africans at the hands of European colonizers. This work and the themes that it speaks to are characteristic of Mutu’s overall oeuvre.