Born in Lowell, Massachusetts in 1834, James Abbott McNeill Whistler moved to St. Petersburg, Russia at age nine as his father, a civil engineer, was charged with supervising the construction of a Russian railroad line. Gifted at a young age, Whistler took private lessons while in St. Petersburg and enrolled in the Imperial Academy of Fine Arts at the age of eleven. After a short stay in England, Whistler returned to America in 1849 and enrolled at the United States Military Academy at West Point in 1851, but was later dismissed for poor grades. To make a living, Whistler worked as a draughtsman for the U.S. Coast and Geodetic Survey, making etchings for topographical maps. 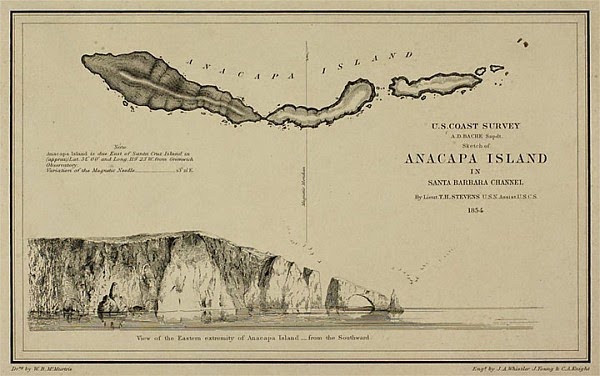 In 1855, Whistler traveled to Paris to study painting at Ecole Impériale et Spéciale de Dessin and later the Académie Gleyre. Interestingly, formal instruction influenced his artistic style less than his friendship with the French realist painter Gustave Courbet and his own study of Japanese prints. During the 1860s, Whistler moved between England and Paris, and in 1863 settled in London where he would find the inspiration for many of his later works in the River Thames.
James Abbott McNeill Whistler championed the ideals of Aestheticism—the concept of art for art’s sake. The London-based, American-born artist believed that art should be appreciated as just art, stripped of its social, religious, moral, or political contexts. Whistler named many of his paintings after musical compositions, titling them Arrangements, Caprices, Harmonies, Nocturnes, Notes, and Symphonies. In doing so, Whistler echoed the Aesthetic sentiments of Victorian essayist William Pater who famously wrote, “All art constantly aspires towards the condition of music.” By fashioning his artworks as musical compositions, Whistler sought to emphasize the technical aspects of his pieces—their composition and tonality—as well as to de-emphasize the subject matter. For Whistler, his works were not intended to be pictures but rather scenes and moments in which he focused on the effects of color to capture a particular sensation.
Whistler achieved some notoriety in the art world when his Symphony No. 1: The White Girl was rejected by both the London Royal Academy and the Paris Salon but became a major attraction at the famous Salon des Refusés in 1863.

The white tones of the painting and the lily held by the woman reference purity, yet her morning dress and disheveled hair indicate the opposite. Baffled by the anomaly, critics interpreted the woman in the painting as a “sleepwalker,” “a newly deflowered bride,” an “apparition,” as well as a possible reference to the titular woman in white of Wilkie Collins’ novel . Averse to the varied interpretations of his work, Whistler wrote, "My painting simply represents a girl dressed in white standing in front of a white curtain." Whistler’s response to his critics suggested his own philosophy of art—that art could exist for its own sake, stripped of any narrative.
Whistler continued to develop his art for art’s sake sentiment throughout his artistic career. He wrote of his most famous painting, Arrangement in Grey and Black No. 1: Portrait of the Artist’s Mother, “Art should be independent of all clap-trap—should…appeal to the artistic sense of eye or ear, without confounding this with emotions entirely foreign to it…Take the picture of my mother…as an Arrangement in Grey and Black. Now that is what it is…what can or ought the public care about the identity of the portrait?” 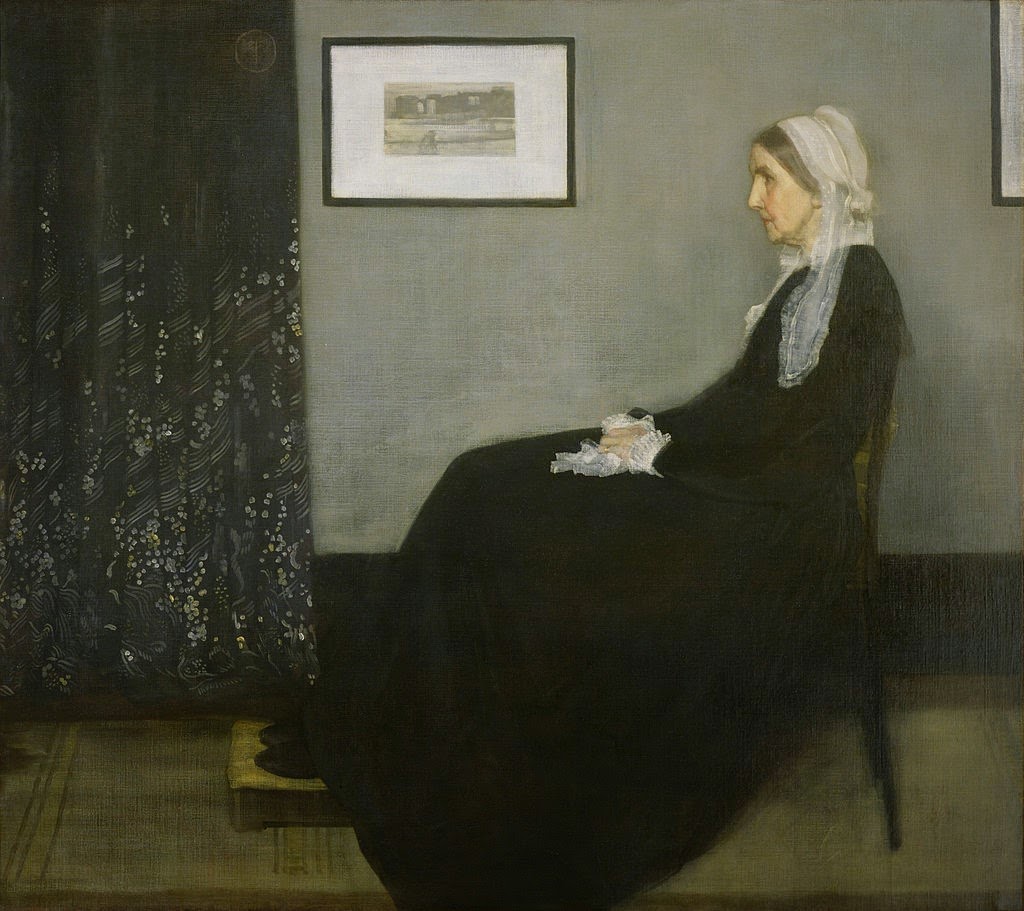 Arrangement in Grey and Black No. 1: Portrait of the Artist's Mother, 1871, oil on canvas.

The severe, unsentimental, and spare portrayal of his mother was radical for Victorian era art. Whistler’s insistence that the identity of his subject should be secondary to the painting’s own aesthetic purpose was indicative of his transition in later life to the increased stylization of the realistic aesthetic he held in his early years.
A controversial avant-garde artist, Whistler was heavily criticized for his style, and in 1878, Whistler went to court over one of his critics’ denigrations of his work. The painting at the heart of the Whistler vs. Ruskin libel suit was Whistler’s Nocturne in Black and Gold: The Falling Rocket. 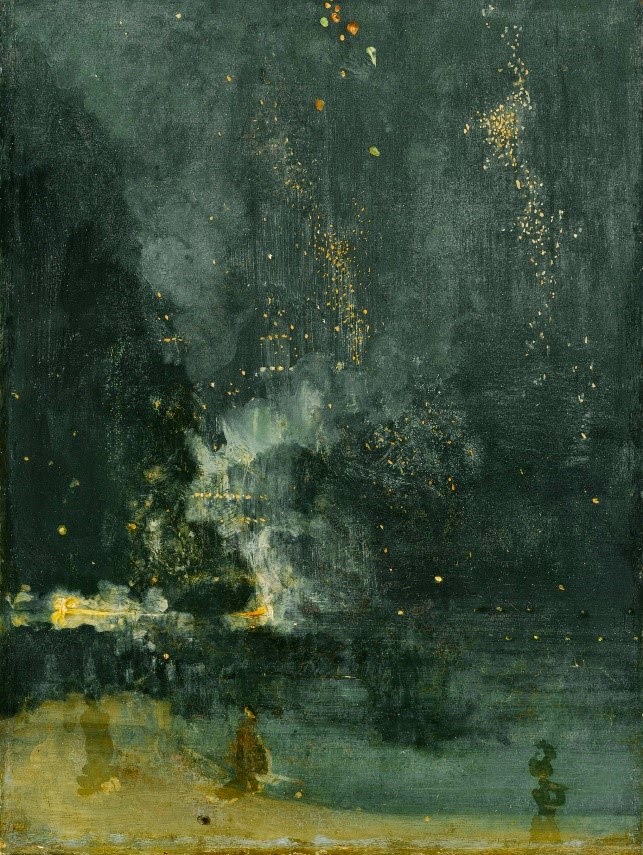 Nocturne in Black and Gold: The Falling Rocket, ca. 1875.

Composed of somber tones, the painting vaguely depicts exploding fireworks in the hazy sky as represented by splatters of yellow paint on the canvas. The billowing smoke distinguishes the water from the sky in Whistler’s atmospheric composition. Whistler meant for the work to be a representation of the fireworks from the Cremorne Gardens. Upon viewing the painting, the eminent art critic John Ruskin wrote:
“For Mr. Whistler’s own sake, no less than for the protection of the purchaser, Sir Coutts Lindsay ought not to have admitted works into the gallery in which the ill-educated conceit of the artist so nearly approached the aspect of wilful imposture. I have seen, and heard, much of cockney impudence before now; but never expected to hear a coxcomb ask two hundred guineas for flinging a pot of paint in the public’s face.”
It was for this statement that Whistler brought Ruskin to court.
At the trial, when questioned about another of his Nocturnes, his Nocturne: Blue and Gold–Old Battersea Bridge, Whistler told his audience, “My whole scheme was only to bring about a certain harmony of colour.” 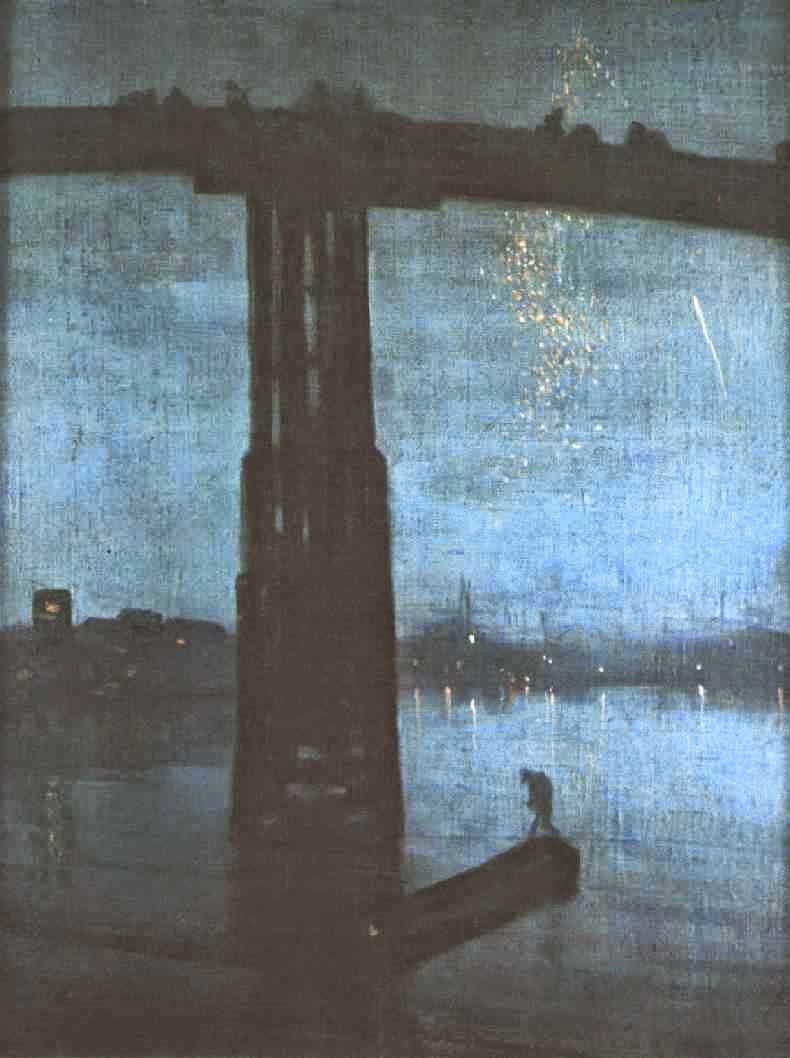 While his Nocturne: Blue and Gold—Old Battersea Bridge is a painting of old Battersea Bridge, the bridge itself is not the centerpiece of the work. Rather, it is the resulting interplay of color, the arrangement of light and shade and the atmospheric mood that Whistler intended his audience to get out of his work. For Whistler, his paintings were not meant to tell a particular story or depict a particular scene but rather to create a sensation. As such, Whistler was heavily criticized for the absence of message in his works. “It was said, or hinted, at the Trial, that certain of Mr. Whistler’s own endeavours had fellowship with the art of the wallpaper and with no other.” With the aim of his works being his technique rather than the subject matter, he grew to encompass the Aesthetic non-utility of art. Art stripped of any context or aim other than art itself cannot be said to be useful, and Whistler’s works were a prime example of such.