Jean-François Millet Was a French artist born in 1814. At the age of 23, Millet started to learn   painting with Paul Delaroche at the École des Beaux-Arts, one of the most influential art schools in France. In 1849, Millet moved to Barbizon and was one of the leaders of Barbizon School. Since he lived most of live struggling with poverty, Millet put his emphasis of painting on the real life and what he received directly from nature. Although he was an artist on rustic themes, Miller focused on the human side in his earlier paintings rather than landscape. Later with more life experience and his own struggle in poverty, Millet shifted his focus on the harmony between human and the environment. The figures and backgrounds in his paintings are not independent but rather fitting in a perfect unity. 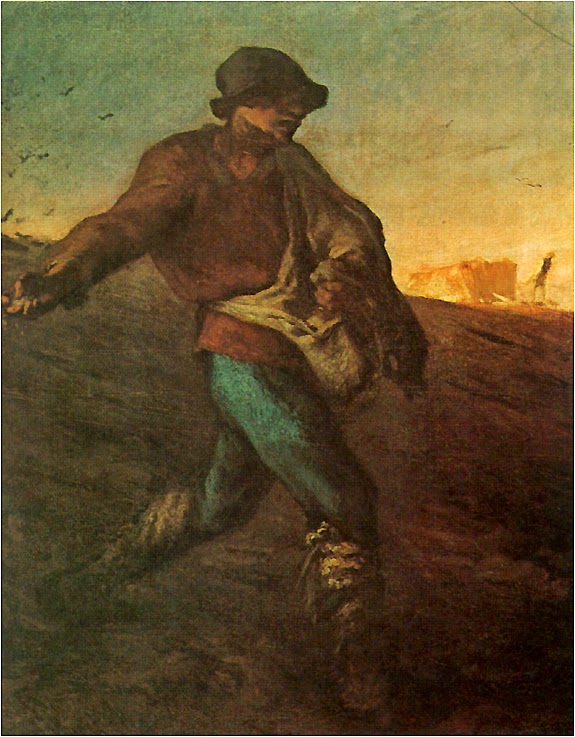 The Sower was one of the early paintings of Miller. It portraits a peasant man striding though a plot of soil as he sows his crops. The painting focused on the figure in a realistic way. Unlike the other rustic paintings at that time, where figures were either ignored or idealized, the peasant man in The Sower wears simple, practical, and dusty clothes. Because of this, this painting is characterized as a “Social Realist” work. This painting also shows Millet’s skill controlling the effect of light changing in the background. With the dark colors of the field at the bottom, Millet balances the painting with the lights of sunset along the horizon. 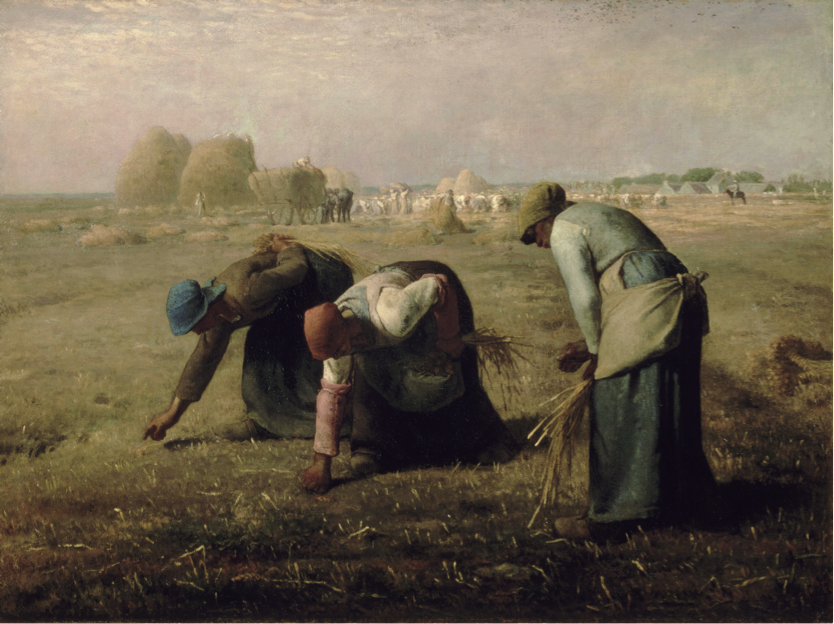 The Gleaners is one of the most famous paintings of Millet’s. In the painting there are three women gleaning the field of stray grains after the harvest. After it was shown in the Salon in 1857, the French society gave it more criticism than appreciation. By contrasting the three women gleaning with the rich harvest in the background, Millet showed the ironic reality for the lower classes in France. This painting also has a detailed background that reinforce the contrast of the classes. 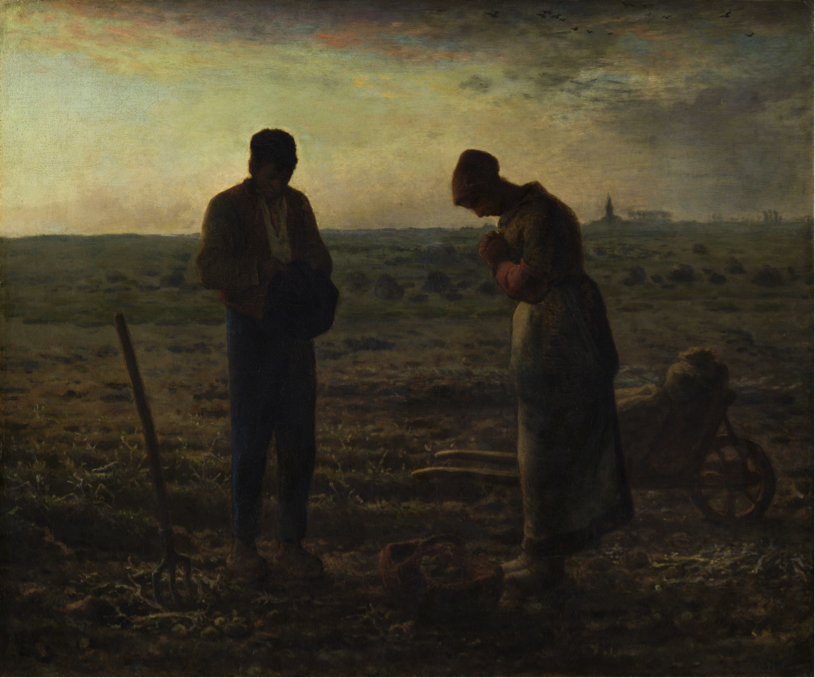 The Angelus, 1857
In The Angelus, Millet portrayed a man and a woman in the field after the harvesting of potatoes. The painting has a strong atmosphere of praying. Different from the other paintings of Millet’s, in which people are always working, The Angelus has two people resting from the labor and praying. Here Millet showed how the working class was also glorified by piety. 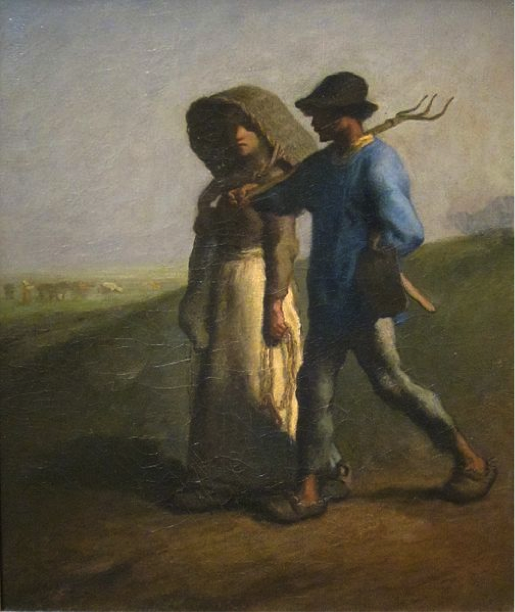 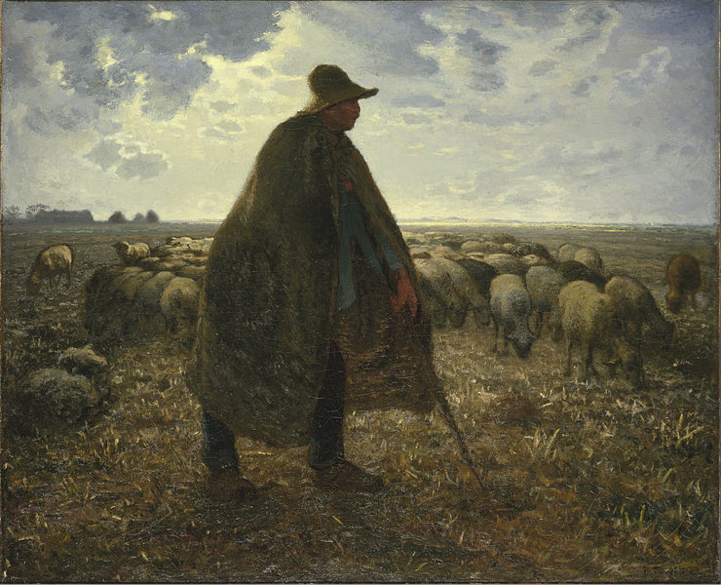 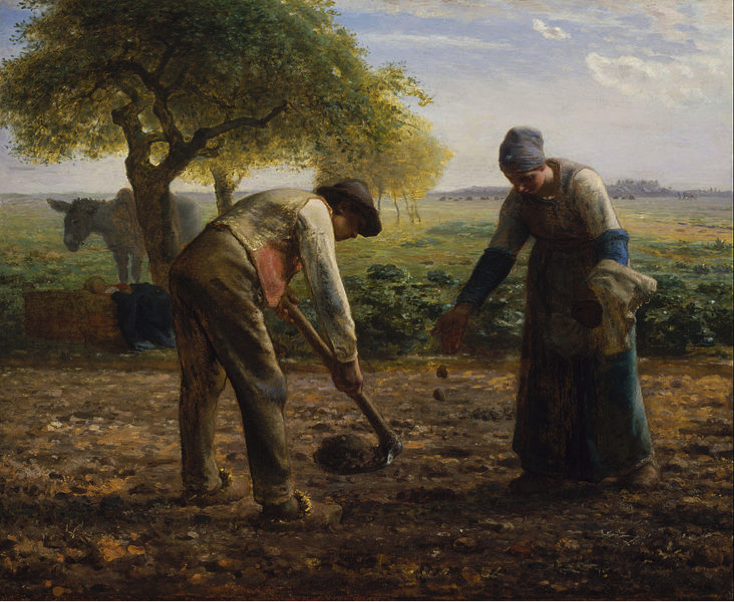