Gustav Klimt - Painter between the Times

Gustav Klimt (July 14, 1862 - February 6, 1918) was an Austrian symbolist painter and one of the most prominent members of the Vienna Secession movement. Klimt is noted for his paintings, murals, sketches, and other objets d'art. Klimt's primary subject was the female body; his works are marked by a frank eroticism.

Klimt's origins and background placed him somewhere between the "ordinary citizens" and the bourgeoisie. His clients, without exception, were from the aristocracy and the haute bourgeoisie. 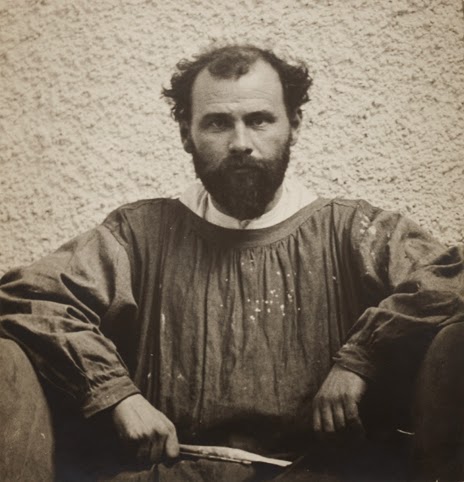 Though he was by no means handsome, he possessed an air of such assured masculinity that not even his famous painter's smock could make him seem unmanly or ridiculous. He wore a beard and his hair began to thin at a fairly young age. His heavy neck and highly colored complexion gave him the look of one who spent much of his time out of doors.

Gustav Klimt's work was and is such that one can lose oneself in it. His women, ladies and girls are mere forms of nature itself, flowers, as it were, that he drew and painted as they budded, blossomed and withered. His approach to women was elementary. He is Zeus approaching Danae, he is a breath expiring over poppy-strewn meadows and summer gardens, a breath of life that knows death and invites it in. Hi is the groom embracing the smiling, dreaming bride, the omnipresent seducer on the wedding night, the father of children and the helpmeet in old age and death. He is all these things, albeit with neither literary detachment nor with classification in such categories as "sweet young things" and "femmes fatales" although they also presented themselves to him in this way in outward life, and although he met the limits of his Zeus-like existence in Emilie Floge, his Hera, whom he never married, but who kept him earth-bound in what was, to all intents and purposes, the extension of a strong maternal bond, even though she was the one who inspired him to symbolic portrayals of an "unearthly" love. A Parisian flair surrounds this female portrait, which seems to turn the subject into the likeness of a modern cocotte. The young woman's eyes are turned to the left, the lids lasciviously lowered. The unknown belle's cool face, which she is partly concealing, is framed by thick sandy hair. The huge hat with the blue-violet scarf has been pulled slightly aslant.

Klimt used a melancholy undertone in this painting. Klimt depicts the couple locked in intimacy, while the rest of the painting dissolves into shimmering, extravagant flat pattern.The two figures are situated at the edge of a patch of flowery meadow. The man wears a robe with black and white rectangles irregularly placed on gold leaf decorated with spirals. He wears a crown of vines while the woman is shown in a tight-fitting dress with flower-like round or oval motifs on a background of parallel wavy lines. Her hair is sprinkled with flowers and is worn in a fashionable upsweep; it forms a halo-like circle that highlights her face, and is continued under her chin by what seems to be a necklace of flowers.

By rendering visible the various manifestations of "woman", Gustav Klimt came tantalizingly close to defining the "modern women" as independent and in control of her own eroticism. The women's movement was to lead girls and women through the revolution of their daily lives, but it was artists like Gustav Klimt who led "sweet young things" and "femmes fatales" alike towards the "path to freedom" by recognizing the power of eroticism and lifting its taboo.