My neck hurts.  Yet, the uncomfortable angle at which I hold my head is worth the view.  Michelangelo’s painting displayed across the walls and ceiling of the Sistine Chapel surrounds me, inviting me into an ancient, biblical time.  The ornate scenes that plaster every paintable expanse of the chapel surely must have been derived from meticulous sketches and drawings…

Michelangelo Buonarroti, born March 6, 1475 in Caprese, Italy, was destined to be a great man.  Painter, draughtsman, sculptor, architect, engineer, and poet, Michelangelo went against his father’s wishes to be a businessman and entered an apprenticeship at the age of thirteen in the workshop of painters Domenico and Davide Ghirlandaio [2].  At fifteen, he lived with and worked for Lorenzo de Medici as a sculptor, completing the marble reliefs Battle of the Centaurs and Madonna of the Stairs.  In exchange for a wooden Crucifix, the prior of Santo Spirito Hospital allowed Michelangelo to draw and make studies of dissected corpses [2].  Not only did Michelangelo better understand human muscular anatomy as demonstrated in the drawing below, Michelangelo’s work involved a more dramatic religious intensity [1]. 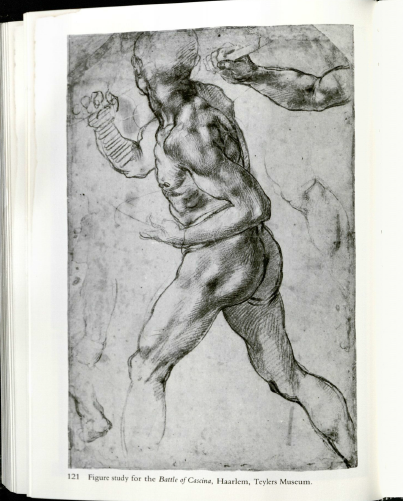 After the Medici’s were removed from power and the Florentine Republic was re-established, Michelangelo traveled to Rome for the first time in 1496 [2].  Following the creation of the acclaimed Pieta and many other sculptures, Michelangelo returned to Florence known as a fine sculptor.  It wasn’t until 1508 that Michelangelo was commissioned by the pope to paint the vault of the Sistine Chapel [2].  Seen below are Michelangelo’s drawings of the Last Judgment that spans the altar wall of the Chapel [1]. 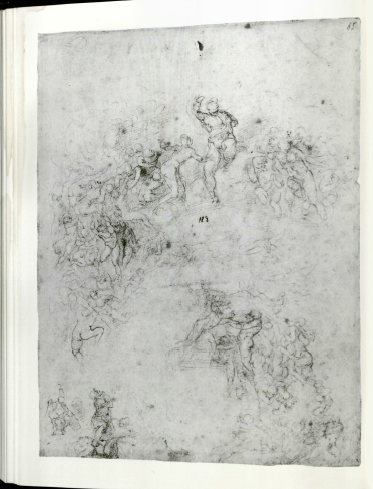 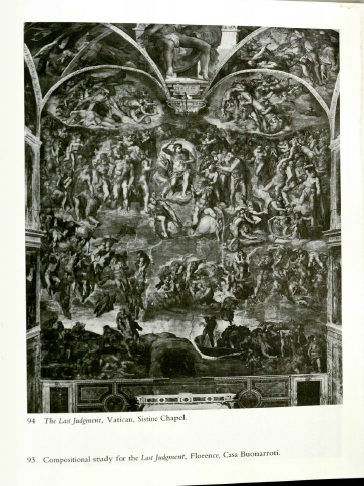 Michelangelo’s beautiful depiction of muscular apostles and heavenly angels lends itself to his study of cadavers earlier in his life.  Reproductions of the Creation of Adam from the Sistine Chapel Ceiling have broadcast an image of his art as expressive of superhuman power [3].  Michelangelo’s depiction of such beautiful religious scenes exemplifies his most defining characteristic, terribilitâ, which is a term indicative of heroic and awe-inspiring grandeur [3].

Eight years ago, my first sight of the Sistine Chapel gave me the chills.  I’m positive that every spectator of such detailed, inspiring work feels the same response, founded in awe and, in secret, jealousy.