Kathe Kollwitz was born in Prussia in 1867 and studied art in Berlin. She came to be known as one of the most important female artists of her time. Kollwitz was known for her striking depictions of war, death, and sorrow, themes apparent in her personal life as she saw firsthand the suffering that accompanied World War I and World War II. Soon after the outbreak of World War I, Kollwitz's youngest son, Peter, died at the age of nineteen. Twelve years after the death of her son, Kollwitz completed a sculpture in his honor. After Peter's death, Kollwitz said "There is in our lives a wound which will never heal. Nor should it" (RoGallary). Although this statement was made with respect to Peter's death, the depictions of death and of heartache throughout Kollwitz's artwork remind her audience of the wounds inflicted by war, many of which will never heal. The expression of sadness in Kollwitz's art is inescapable and allows the viewer to mourn the unhealable.

The first work chosen was a self-portrait created in 1910. This is not a very typical expression for a self-portrait. Kollwitz appears to be saddened or distressed. The lines used to establish value creates a disorder in the work. 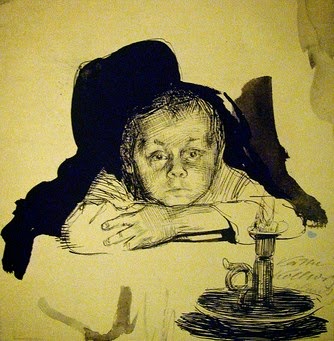 The second image is a portrait of her son Hans, created in 1895. The heavy, dark shadow behind the child gives this drawing a very ominous feeling. 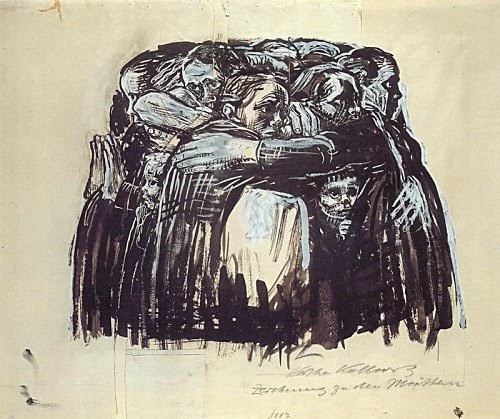 This 1921 work was entitled "The Mothers" and was completed in pen and brush. Kollwitz was able to create a very distinguishable look of fear on the face of the figures in the drawing.

I chose Kathe Kollwitz as the subject of this post because of the expression of feeling displayed in her work. When you look at one of her drawings, it is impossible not to feel what the subject of the drawing is feeling.