Saul Steinberg was most famous for his drawings which appeared in the American pop-culture magazine The New Yorker. Over his career, Steinberg made over 1,200 drawings. Since his death in May 1999, some of his drawings have continued to appear in the magazine.

A Romanian Jew born before the start of the first world war, Steinberg received professional training in architecture in Milan. He graduated in 1940, just as the Fascist government began enacting anti-semetic laws. After living in the Dominican Republic waiting for a U.S. visa, The New Yorker sponsored his visa in 1942. Thus began his lifelong relationship with the publication.

Steinberg could be described as an eccentric character, stating that once he died he "would be reincarnated as a dog's elbow". His eccentricity is reflected through his habits as well as through his drawings themselves. He believed in the power of spontaneous gesture, and thus first impressions meant a lot to him. This helps explain his choice of artistic medium: the magazine. Publishing his work through a magazine allowed him to receive feedback in real time, as if it were a live performance.

As a European born before the First World War, Steinberg was a modernist, and such is reflected in his style. The most famous of his works consist of quickly sketched freehand drawings. While he did finish some fully finished ones, with shading and perspective, a colleague, E.B. White advised him not to do that, and stated "If you ever got good, you'd be mediocre".

Working in Fascist Italy, he became used to poking fun at the war in general as opposed to its components, and this continues through his postwar work, as much of his work tends to poke fun at greater societal trends rather than one individual or event in particular.

Steinberg had a particular affinity to New York. In one of his more pointed drawings, he portrays Chicago as a one-dimential city - literally. With its high-rise facade, Chicago is caricatured in his drawing, covering what is in reality a small town. It certainly was, as New York was more than twice the size of Chicago in 1952, when he profiled it. A sketch from that profile is included below: 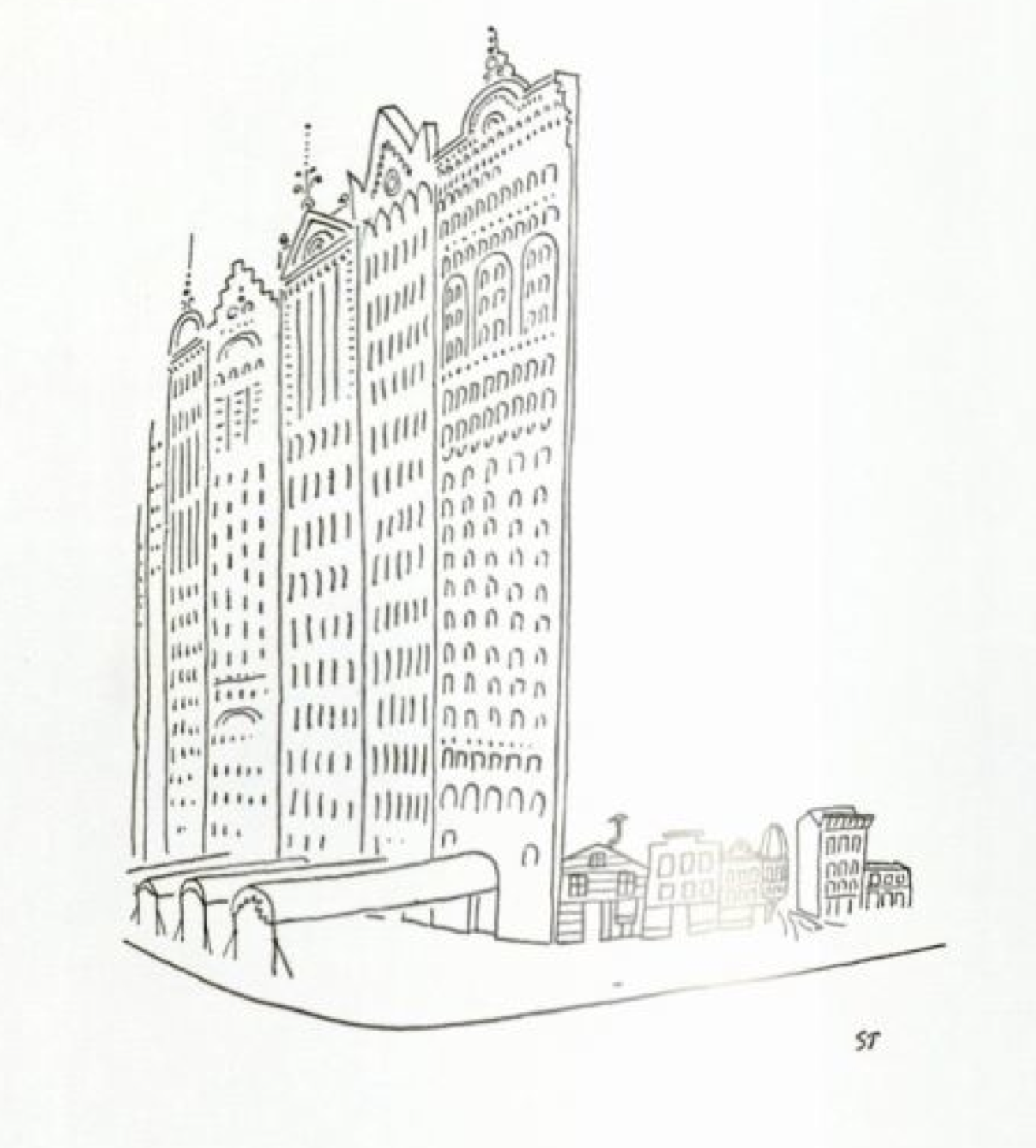 In relation to his portrayal of Chicago, his cityscapes of New York City are much more vibrant and full. In his 1960 cover of The New Yorker, he uses color to highlight the buildings, bringing out the vibrancy and excitement of the city. In relation to his drawing of Chicago above, you can see that there is clearly much more going on in his depiction of this New York cityscape. While in the Chicago drawing, there is no action, in this sketch of New York, you can see a sea of vehicles and pedestrians running about the city below. Based on the figures present and the visual language of the drawing, you can see how he clearly favors New York to Chicago 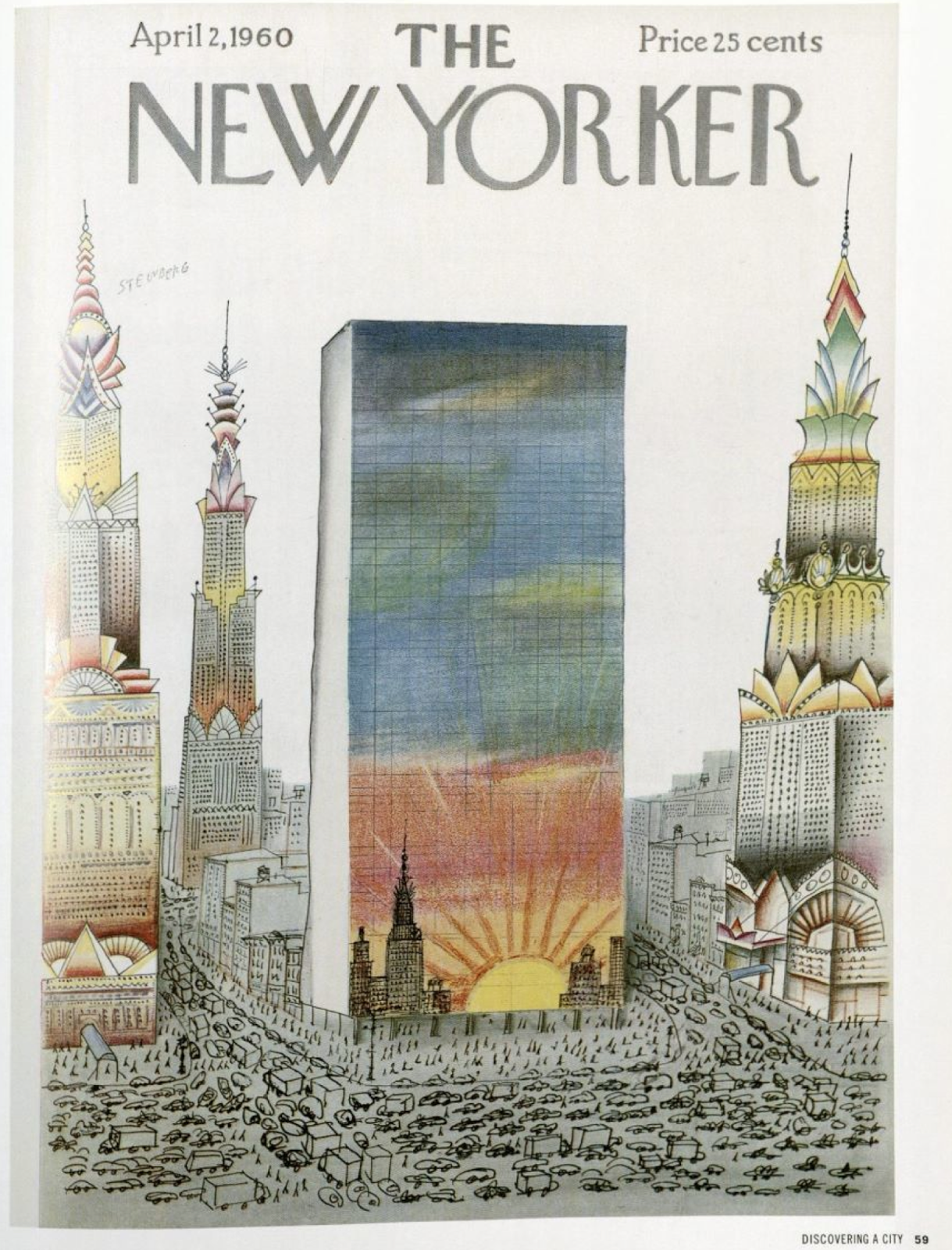 By far his most recognized New York cityscape was on the cover of the March 29th 1976 New Yorker. View of the World from 9th Avenue portrays the world in a very New York-centric light, which parodies the view taken by many New Yorkers, in which they were in fact the center of the universe. This is reflected through the foreground, in which there are pedestrians portrayed on 9th and 10th Avenue, cars driving up and down the West Side Highway, and then as soon as you cross the Hudson River, a geographic separator of New York from the rest of the world, there are no traces of civilization. Other american cities are portrayed simply by their names written in their approximate locations as you move from New York across the United States. Canada and Mexico appear as white boxes devoid of any detail, as are Russia, Japan and China. The emphasis on the foreground reflects New Yorkers' self-centeredness, believing that much of the rest of the country is irrelevant and other countries are simply an afterthought. 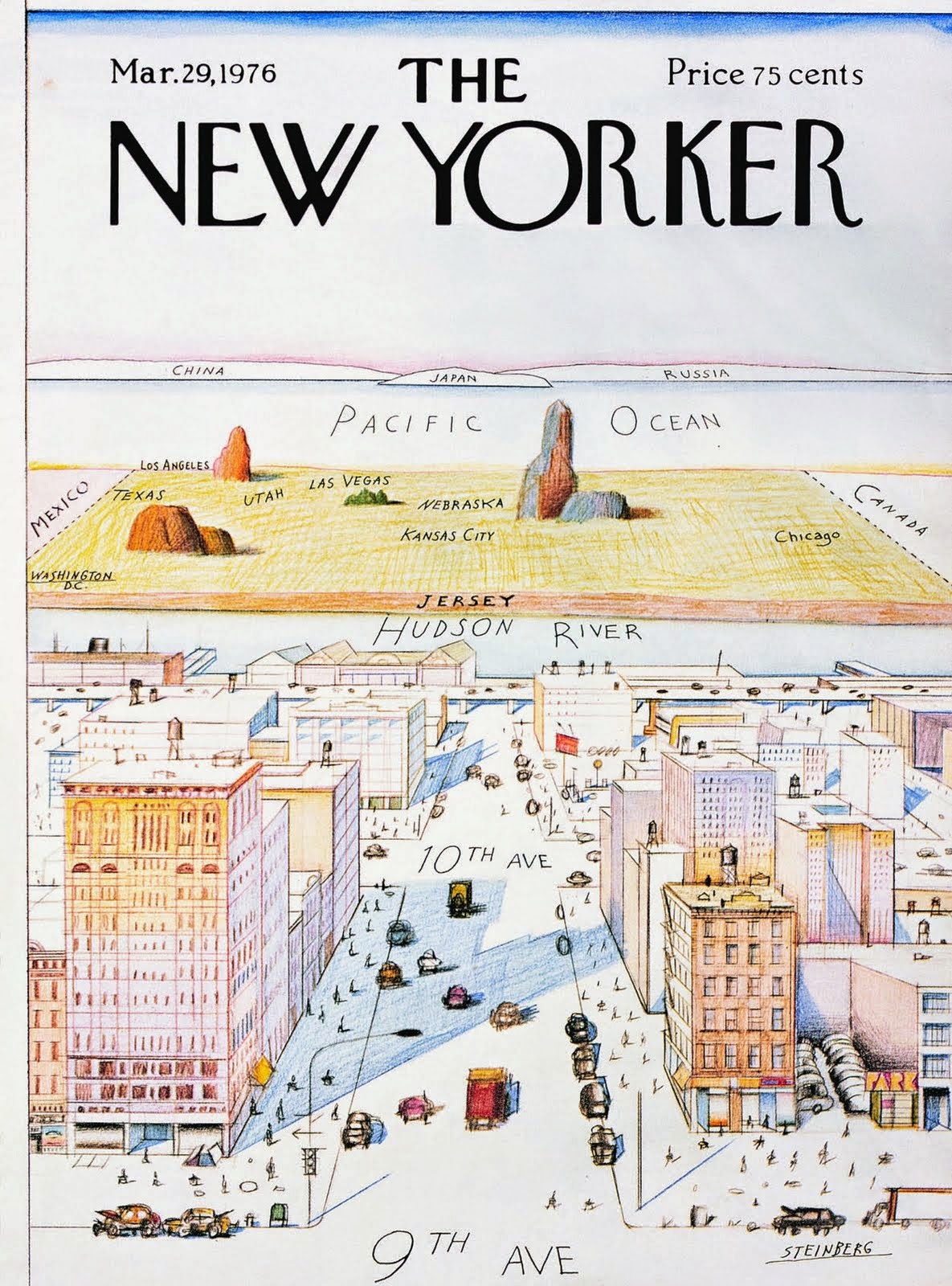 In addition to social commentary on New Yorkers and their self centered attitudes, Steinberg enjoyed commenting on the rest of the art world. He believed that art was having less and less to do with prestige or ideas, but rather to do with power. This is reflected in his cover of the New Yorker on May 19, 1962. On the cover, you can see the Eagle with "École de New York" written across its chest sinking its talons into a guitar labeled "École de Paris". Lastly, some of his smaller sketches captured my eye. I particularly enjoyed this depiction of an antiuqes store from the February 23, 1946 New Yorker, in which he portrays a man dressed in 17th or 18th century dress, taking his things back from the antique store at gunpoint. It flips the table on antiquing, which boiled down to it, is simply reselling deceased people's nice property. Saul Steinberg stood out to me as I remember flipping through the New Yorker as a young child, when his drawings were still regularly published in the newspaper. When I began taking this class, the idea of the blog post reminded me of Steinberg and his drawings, and I went to Lilly Library only to find a drawing book full of his work. Upon further research, Steinberg's drawings are far more prolific than I had originally anticipated, but I took great pleasure in selecting my favorite works. His style of drawing, with his quick outlines and often times very little shading while remaining committed to detail and line quality really jumped out at me with regards to his work, and is something that I am trying to work on with my own drawing. I hope to continue to leaf through Steinberg's work, as I now realize that I have barely scratched the surface of his more than 1,200 drawings.