Claude Monet was a famous French painter whose work gave a name to the art movement Impressionism, which was concerned with capturing light and natural forms.  He was born on November 14, 1840, in Paris, France.He enrolled in the Academie Suisse. After an art exhibition in 1874, a critic insultingly dubbed Monet's painting style "Impression," since it was more concerned with form and light than realism, and the term stuck. Monet struggled with depression, poverty and illness throughout his life. He died in 1926.

Monet's early work is indebted to the Realists' interests in depicting contemporary subject matter, without idealization, and in painting outdoors in order to capture the fleeting qualities of nature. The following picture would be considered a representation of his early work. I really enjoy Monet's art work because he is a demonstration of someone who starts with a certain style but keeps on pushing himself to seek the true art form and artistic style that belong to him. He gave birth to a movement that had been pursued by people for ages. He is the master. 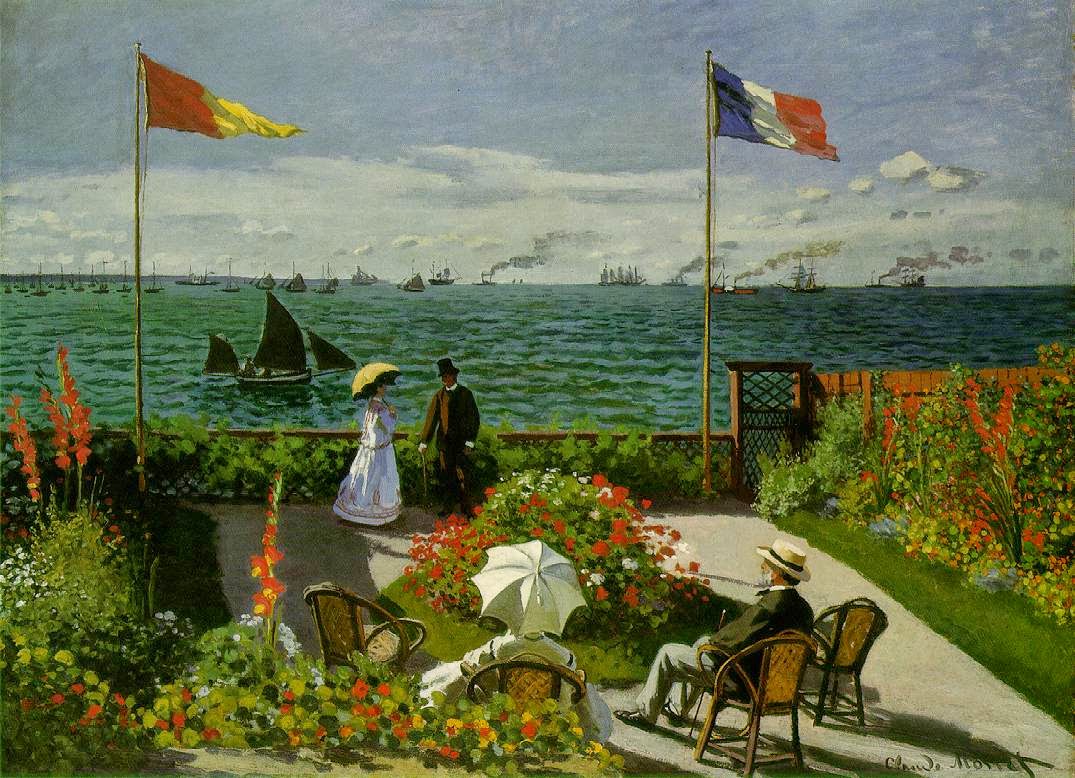 My favorite series of Claude Monet is the monumental compositions known as the Water Lilies. They occupy a unique position among the thousands of paintings in the Museum of Modern Art's collection. From the moment the first water lilies painting arrived in 1955 they have claimed a place apart, most notably in their longtime home in a gallery on the second floor of the museum's east wing, overlooking the Sculpture Garden. I have been to MOMA and his pictures, without doubt, took my breath away. 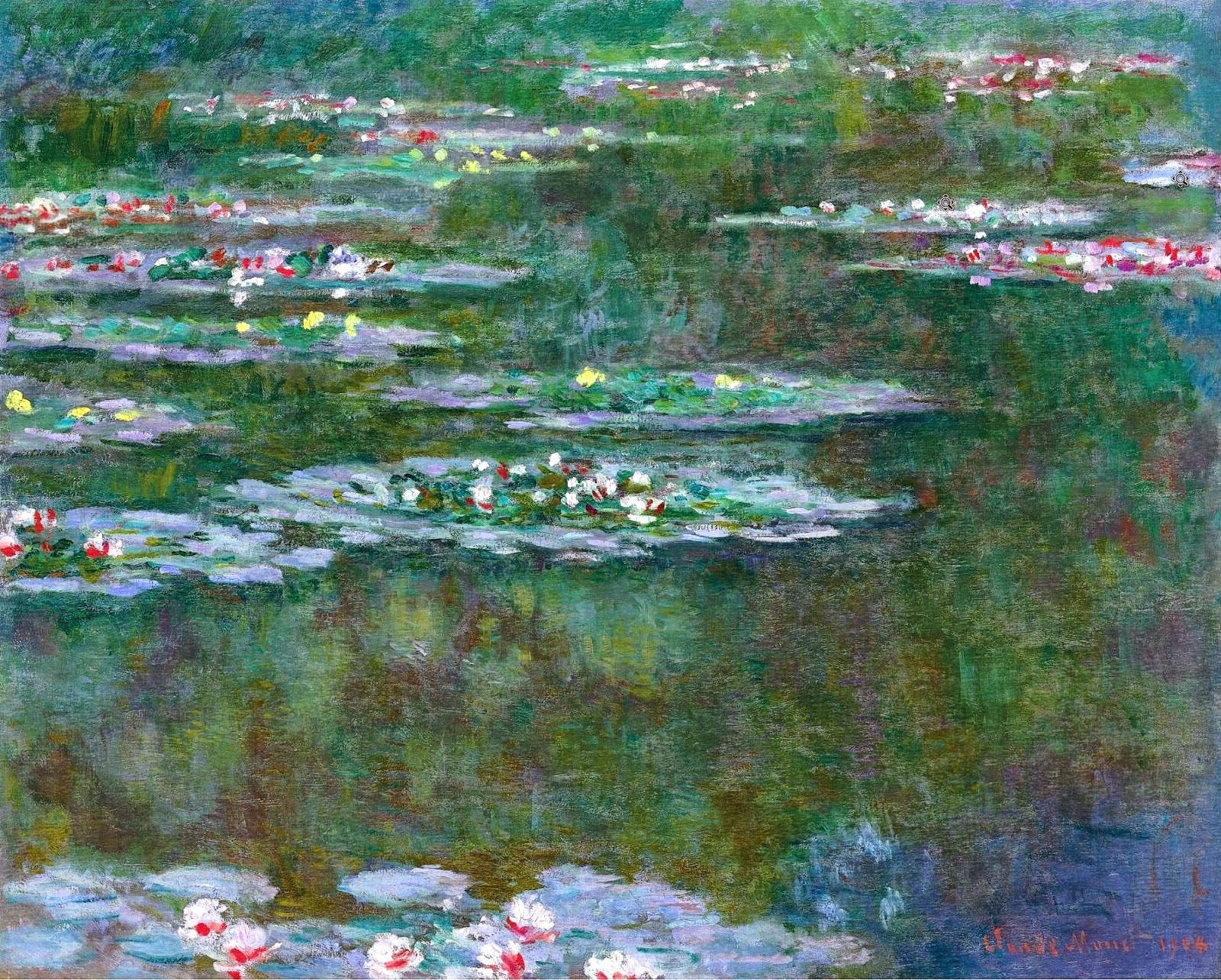 fig 2
Claude Monet (1904)
Beginning in 1903 he began to concentrate on works that dispensed with the conventional structure of landscape painting----omitting the horizon line, the sky, and the ground----and focus directly on the surface of the pond and its reflections, sometimes including a hint of the pond's edge to situate the viewer in space. Compared with later depictions of the pond (see fig.3), these paintings are quite naturalistic both in color and style. Monet exhibited forty-eight of these water lilies in a highly successful exhibition in Paris in May 1909. 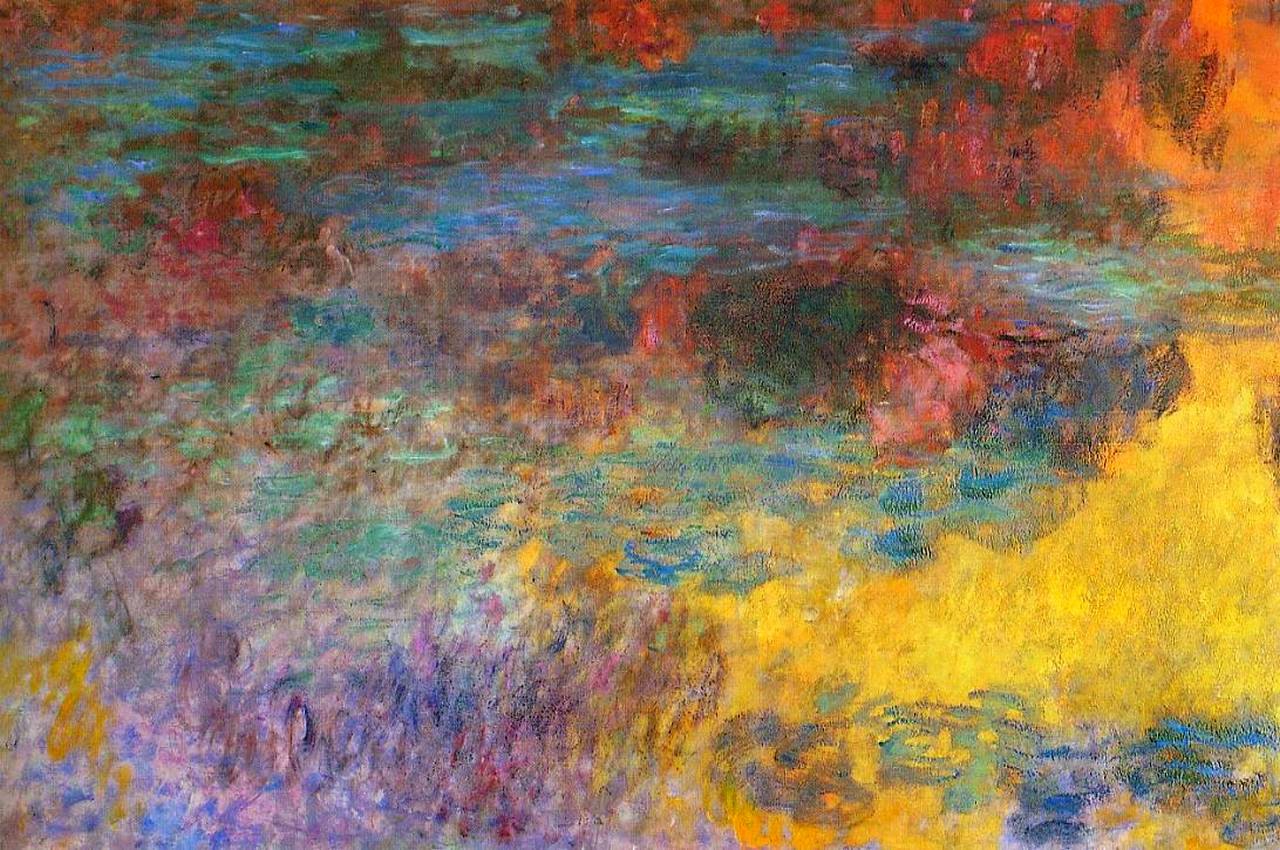 In his later years, Monet also became increasingly sensitive to the decorative qualities of color and form. He began to apply paint in smaller strokes, building it up in broad fields of color, and, in the 1880s, he began to explore the possibilities of a decorative paint surface and harmonies and contrasts of color. The effects that he achieved, particularly in the series paintings of the 1890s, represent a remarkable advance towards abstraction and towards a modern painting focused purely on surface effects.