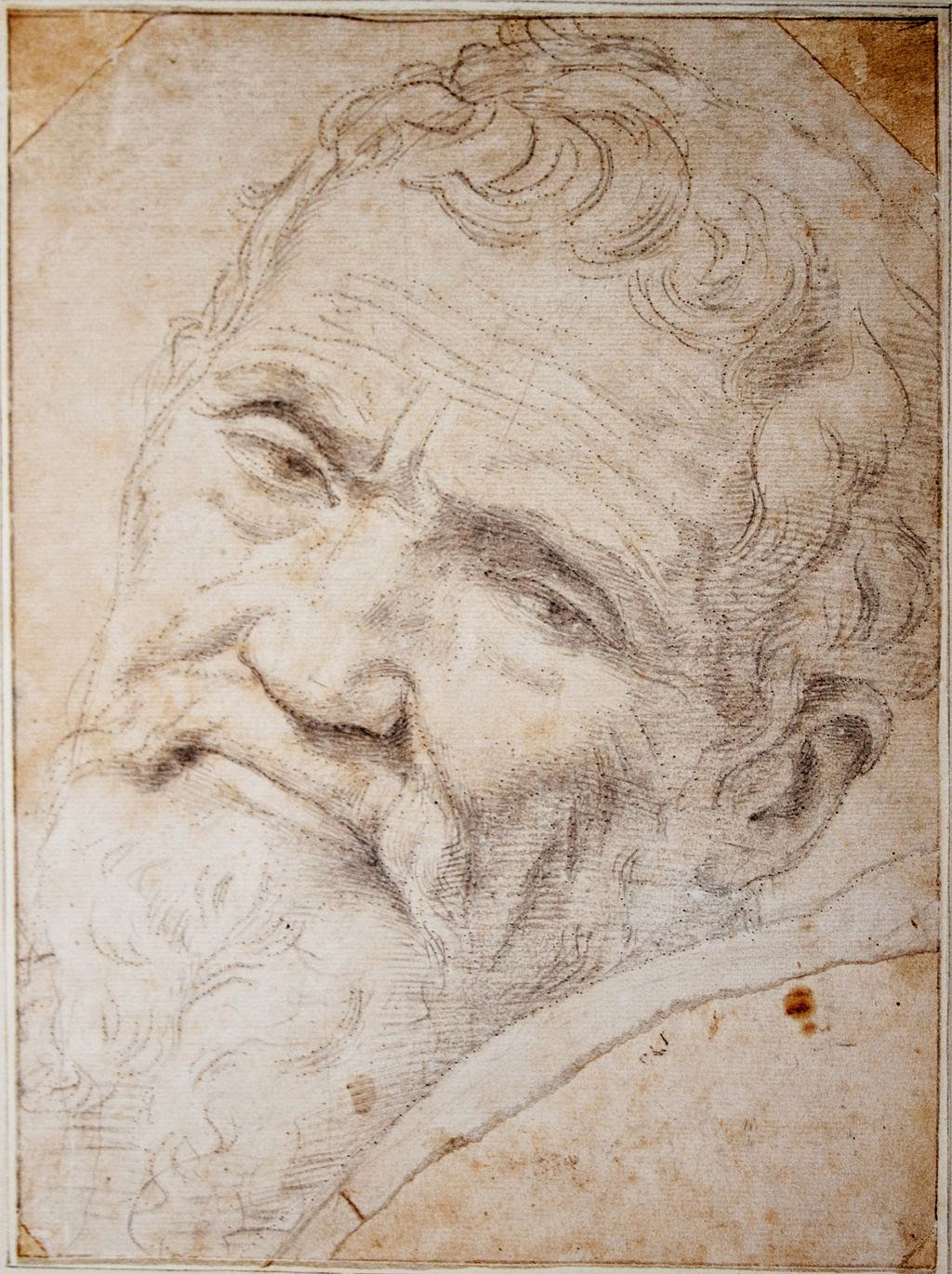 Michelangelo Buonarotti was an Italian sculptor, architect, painter, poet, and graphic artist who lived from 1475 to 1564. Many of his creations embody his fascination with the ideal conception of man and nature. His tireless exploration of the human form was critical to humanity’s understanding of the body. Michelangelo is most well known for his sculptures, such as David and Pietà, and his paintings of the Genesis and The Last Judgment on the ceiling and the altar of the Sistine Chapel.  Additionally, Michelangelo is renowned for his architectural contributions to St. Peter’s Basilica. Michelangelo deftly prepared his sculptures, engineering projects, and paintings with several study drawings. He believed that drawing was the practical foundation and basis of every genre of art but only viewed his own drawings as a preliminary step to creating his real work. A simple means to an end. However, his contemporaries collected his sketches devotedly, viewing them as autonomous works that exposed the artist’s creativity and spirit. Michelangelo’s focused studies and sketches reveal his exceptional knowledge of anatomy and a desire to render his compositions clearly. 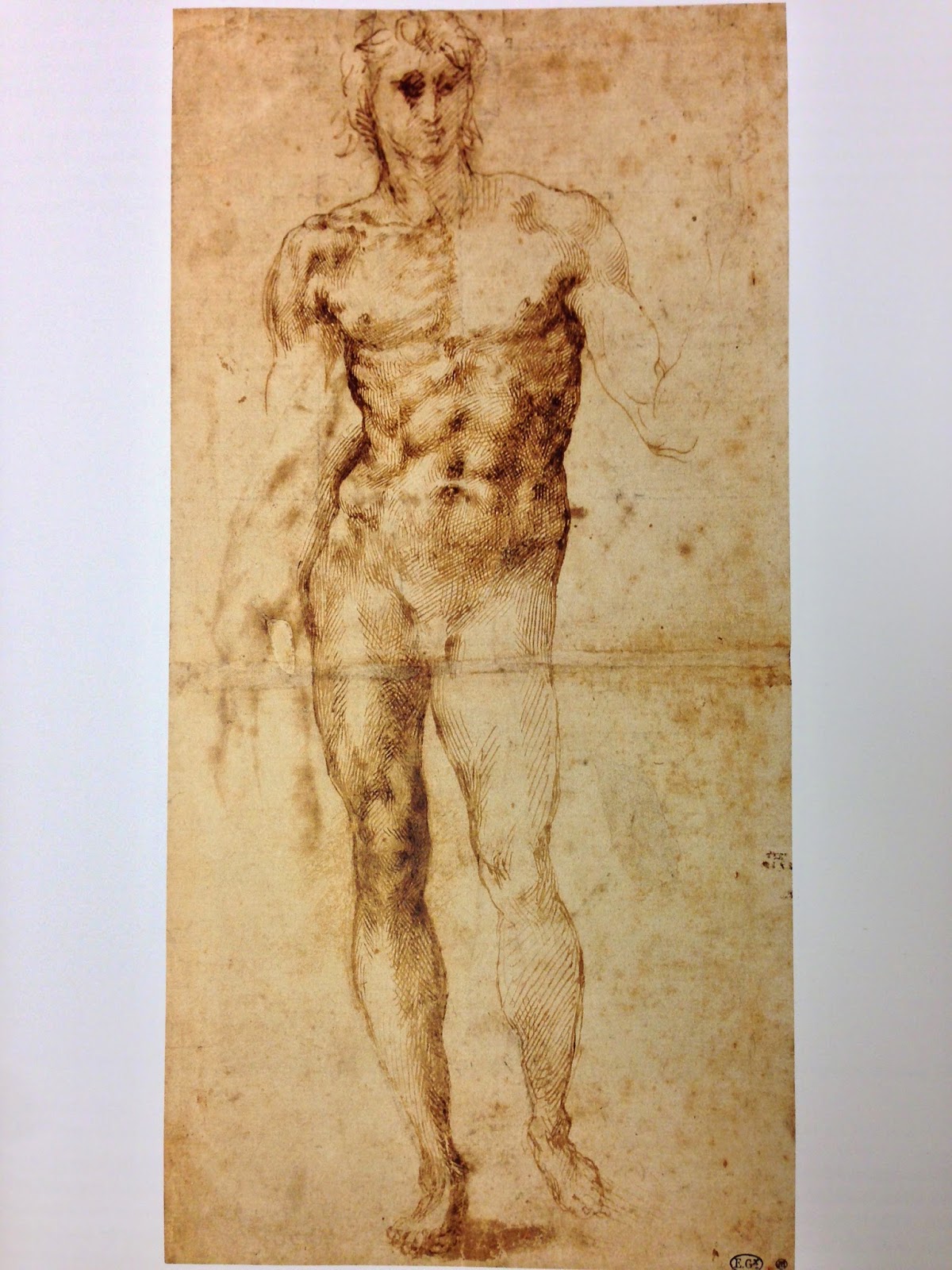 Michelangelo’s study of a Male Nude is a great example of his masterful grasp of the musculature of the youthful male body. This study drawing fills the sheet and captures the movement of the male subject gracefully. Michelangelo focuses on the tightening of the subject’s thigh muscles as he plants his right foot in the ground, propelling his motion forward.  To me, the young male subject appears to be slowly walking out of the page, confidently exiting antiquity and entering the present day. This sketch obviously brings to mind Michelangelo’s marble sculpture of David and may have been a prerequisite for that work. Similarly, the sketch portrays a purely frontal view of the nude and focuses mostly on the sinewy definition of the right leg and torso of the subject. 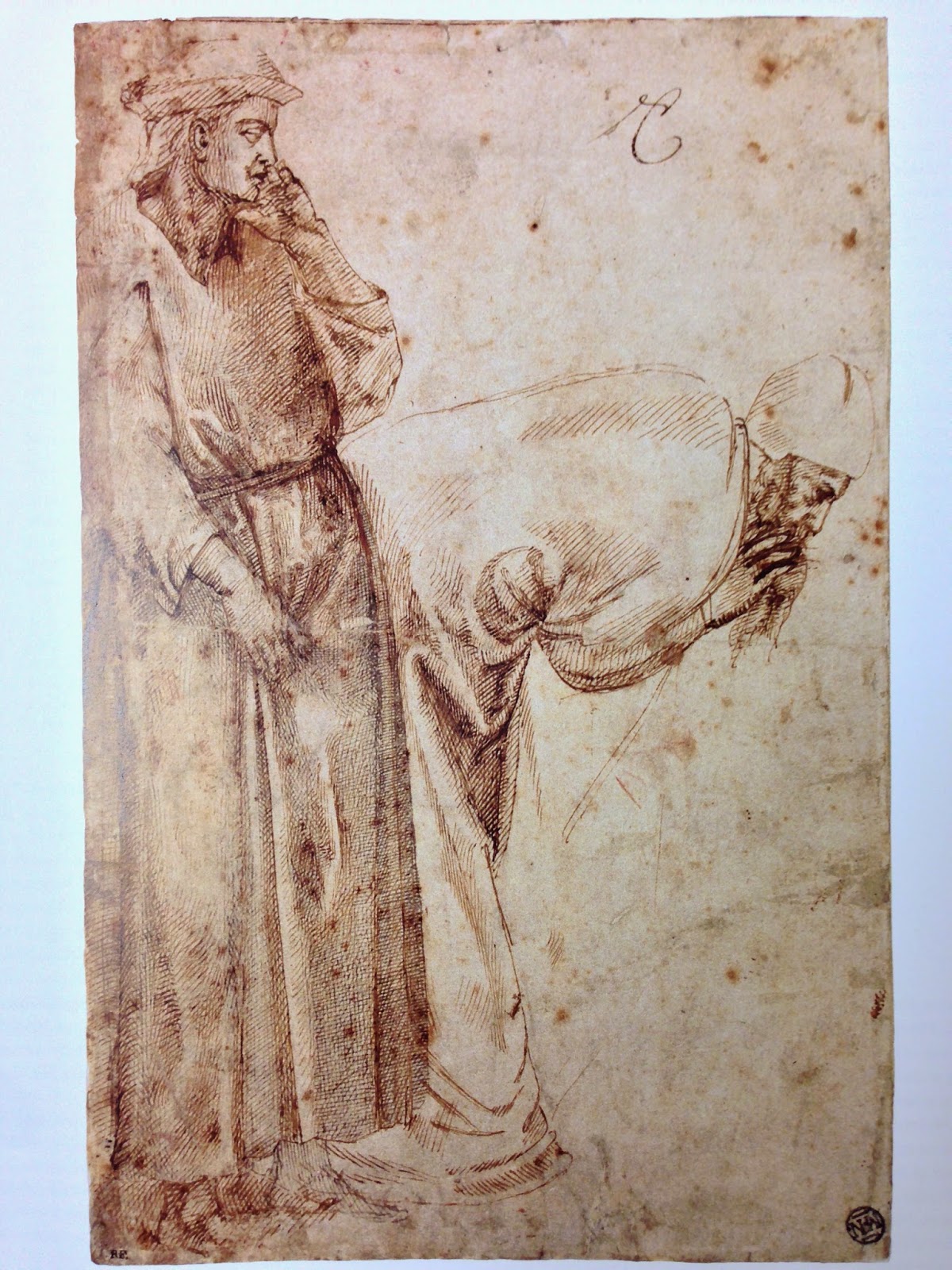 Michelangelo has a legendary reputation that began with the mastery with which he drew from a very early age. According to his two earliest biographers, Ascanio Condivi and Giorgio Vasari, Michelangelo was able to produce copies of various works by older masters that were completely indistinguishable from the originals. By the way, Michelangelo was the first western artist whose biography was published while he was alive. He was truly considered to be the pinnacle of Renaissance artistic achievement. The study drawing above is Michelangelo’s partial copy of Giotto’s fresco of The Ascension of St. John the Evangelist in the Peruzzi Chapel of the Basilica of Santa Croce in Florence. In this sketch, Michelangelo obviously was not attempting to make an exact replica of Giotto’s work as he only depicted two of the five characters in the original and used pen and gray and brown ink of traces of a preliminary drawing in stylus. Michelangelo clearly admired the simplicity and grandeur of the figures in the original but provided much more detail in his own sketch, as one can see in his adaptation of the hand and beard of the character on the right, to create a more realistic and vibrant depiction of the subjects. 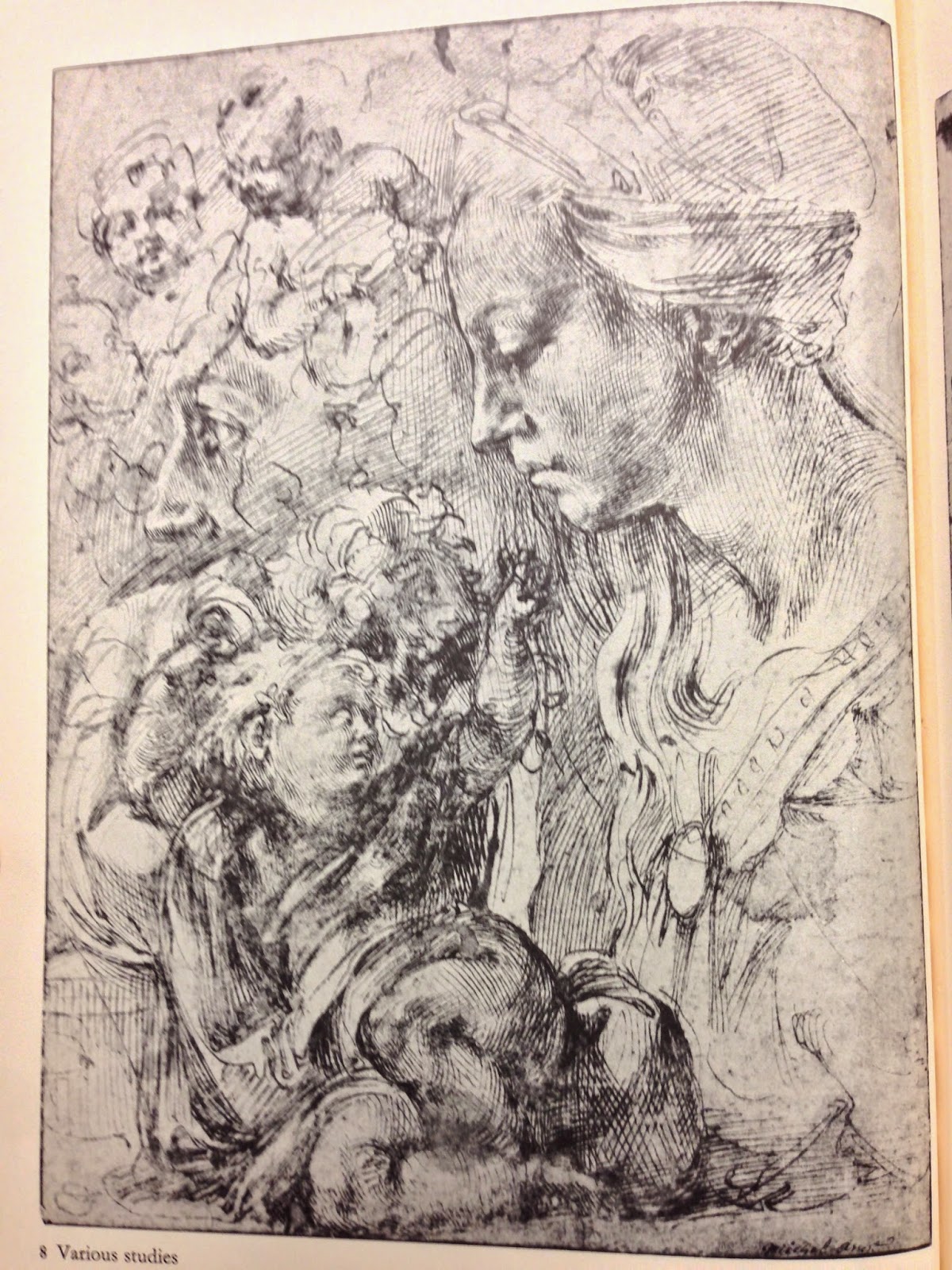 The drawing above is from the period in which Michelangelo was constantly refining his portrayal of Madonna and Child in both sculpture and painting. The Madonna presented in this sketch on the right side of the page appears to be a blend of Michelangelo’s later Madonna of the Doni Tondo (a painting) and Madonna of Bruges (a sculpture). The compactly muscled arms of infant Jesus are very similar to many of his depictions of the character. This particular drawing has actually been the subject of rather fierce scholastic disputes as to whether Michelangelo or one of his pupils sketched this piece. 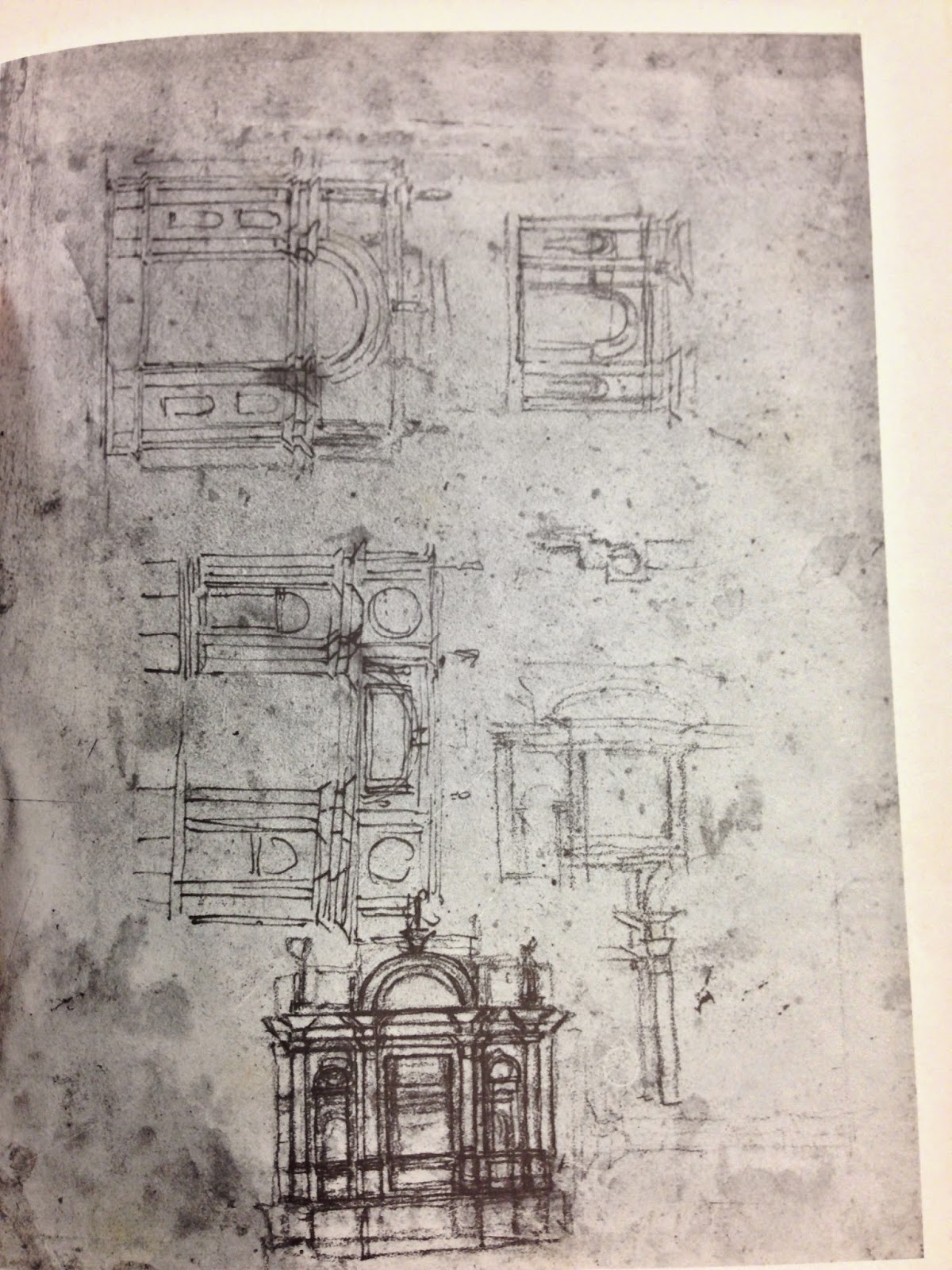 This study drawing for a structure in the form of a triumphal arch is a great example of Michelangelo’s architectural design prowess. This drawing unveils his artistic progression as he sharpens the design of the arch, beginning with the rougher sketches at the top of the page and ending with the detailed image at the bottom. Historians believe that these sketches were early designs for his 1516 project for the tomb of Pope Julius. This period marked the beginning of Michelangelo’s architectural work. 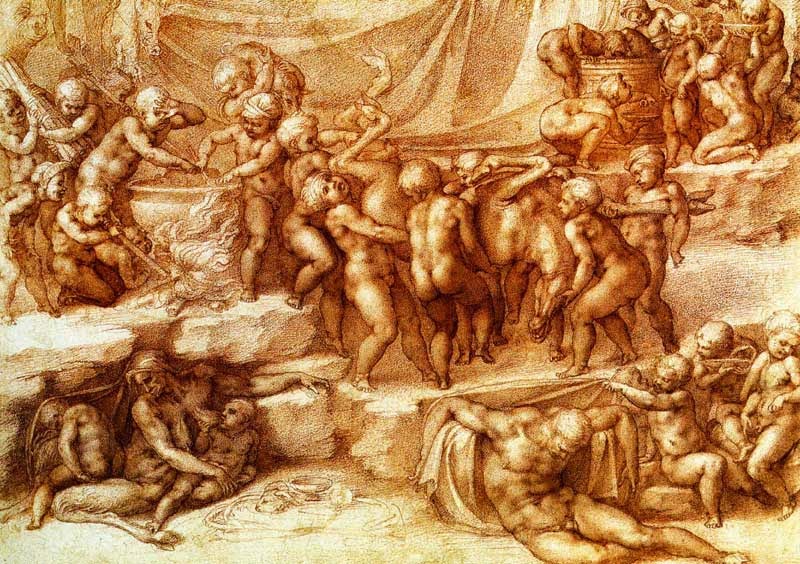 The final sketch above, Bacchanal, is on of Michelangelo’s most famous sketches. The drawing is dated to 1533 and was done using red chalk on laid paper, which gives the figures a consistently high degree of finish. The composition includes more than thirty figures, mostly children who are drunk and uncouth. According to the art historian Michael Hirst, the figures were probably sketched in short strokes before the artist applied chalk to add “fineness” to the drawing. The tones vary from a light orange to a deep brown due to the wide range of densities of the red chalk, which makes for the rich texture and luminosity of the figures.

Michelangelo was arguably the most talented and well-versed artist in history and his accomplishments in sculpture, painting and architecture will live on for eternity. Michelangelo only produced 600 drawings that we know of and they are much less renowned than his works in other artistic mediums. However, they should be studied and cherished immensely for they represent the fundamental basis of artistic expression.

Drawings by Michelangelo in the Collection of Her Majesty the Queen at Windsor Castle, the Ashmolean Museum, the British Museum and Other English Collections: An Exhibition Held in the Department of Prints and Drawings in the British Museum, 6th February to 27th April 1975. London: British Museums Publications, 1975. Print.
Posted by Unknown at 12:07 PM