Yayoi Kusama was born in 1929 to a middle-class conservative family in Japan. Since childhood, Kusama suffered from deep psychological issues, the most prominent of which were frequent hallucinations and thoughts of suicide. In order to escape her persistent suicidal thoughts, she turned to art. Kusama once said, “If it were not for art, I would have killed myself a long time ago.”1 Throughout her career, Kusama has used her work to portray her troubling hallucinations. Though Kusama’s early work contains features of the typical Japanese art, such as watercolor on paper, her later pieces drastically diverge from her Japanese schooling. When Kusama moved to the United States, a stylistic shift is apparent in her work: Kusama adapted to the avant garde art movement typical in New York, and began to paint her famous Infinity Nets, large-scale canvas paintings which required careful planning and consisted mostly of monochromatic colors. Kusama later moved back to Japan, where she has voluntarily lived in an insane asylum since 1977. Her later work largely deals with installation pieces centered on the use of polka dots. Kusama has distinguished herself from artists of time by incorporating various themes in her work, including feminism, minimalism, and pop art, among others.2 I chose to write my bibliography on Yayoi Kusama because I am deeply fascinated by her precarious mental state as an inspiration for her work. Art is not just a hobby or a career for Yayoi Kusama: it is a survival mechanism. The following works will take us through three important phases of Kusama’s life and career: her early work in Japan, her New York City-based work with Infinity Nets, and lastly, her more recent experimentation with installation pieces  and polka dots in Japan. 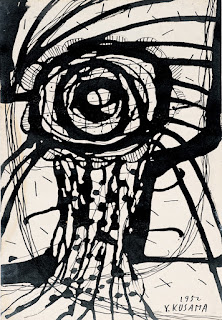 In 1952, while living in Japan, Kusama completed “A Flower” using watercolor, a common Japanese medium. Kusama uses black ink on off-white paper, which as we will see, stands in stark contrast to her later use of vibrant, psychedelic colors. The object resembles a flower with a clearly defined stem on the bottom half of the paper and the petals on the top half. In the forefront of the work, Kusama uses thick, dark brush strokes to capture the viewer’s attention. She uses finer strokes in the background, giving the work a three-dimensional appearance.

From this early work, the powerful influence of Kusama’s hallucinations is apparent. One characteristic of hallucinations is the coming to life of everyday objects, such as a flower, often in terrifying fashion. Looking closely at this piece, top part of the flower bears striking resemblance to an eye, while the stem of the flower resembles the torso of a human body. At the bottom of the work, Kusama includes two thick brush strokes that simulate human legs and two more on the upper-middle portion to represent arms. The thick brush strokes falling away from the eyeball-shaped object in the center appear to be strands of human hair. The title of the work is quite ironic. When most people think of “a flower,” they picture a typical, colorful, harmless object with stem and petals. They might associate it with tranquility or beauty. However, Kusama’s portrayal of “A Flower” gives the viewer a terrifying display of her deeply troubled mind.

As an art student in Japan, Kusama’s schooling was largely influenced by the Nihonga style of painting.3 Developed in Japan, Nihonga painting emphasizes the use of simple, pale colors painted onto “Washi,” traditional Japanese paper. While Nihonga paintings can have multiple colors, many are characterized by grey and black tones.4  “A Flower” clearly follows the Nihonga format, suggesting that this traditional Japanese style influenced Kusama’s early work. In 1957, however, Kusama leaves Japan for the United States, as she claimed to be frustrated with the constraining nature of traditional Japanese methods.5 Her physical departure from also signified her departure from the Nihonga influence, as her later works employ an entirely different style. 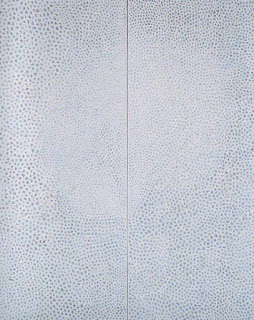 Kusama arrived in New York City in 1958 and quickly took notice to the growing trend of action paintings. Looking back upon her experiences, Kusama said, “Around that time, it was flooded with action paintings. Everyone jumped at this style and this type of painting easily sold at a high price. However, I believed it is important for me to create unique art that comes only from within myself, in order to establish my life as an artist. Therefore, I introduced my painting: Infinity Nets, in which the inclination is the complete opposite to these action painters.”6 “Pacific Ocean,” which was painted in 1960 with oil on canvas, serves as a prime example of Kusama’s Infinity Nets. This work is characterized by pattern, repetition, and extremely close attention to detail. The painting consists of small, closely painted circles. Just like her early work in Japan, Kusama’s hallucinations once again inspired “Pacific Ocean” and other Infinity Nets.  The repetition and detail of the small, simple objects throughout a large canvas can be described as obsessive compulsive. Kusama used her infinity nets as a means to convey and possibly escape her disturbing hallucinations. She once said, “My nets grew beyond myself and beyond the canvases I was covering with them. They began to cover the walls, the ceiling, and finally the whole universe.”7

Kusama’s Infinity Nets do not fit the mold of any one particular artistic style. Rather, Kusama distinguishes herself by her ability to transition back and forth between different styles. After all, she left Japan because her disdain for the idea of rigidity and boundaries constraining her stylistic choices. “Pacific Ocean” touches upon the abstract impressionism movement, which was centered in New York from the end of World War II into the mid-1960s. While Kusama did rebel against the idea of “action painting,” as noted earlier, her exquisite attention to detail and small brush strokes suggest at least some degree of conformity to the New York City-based movement. Kusama’s repetition of simple, defined shapes in “Pacific Ocean” and other Infinity Net works displays certain aspects of minimalism, another popular movement at this time. Minimalism became popular in New York during the early 1960s, just around the time when Kusama was painting “Pacific Ocean” and other Infinity Nets.8  Donald Judd, a distinguished minimalist artist described his counterpart, “Yayoi Kusama is an original painter. The expression transcends the question of whether it is Oriental or American. Although it is something of both, certainly of such Americans as Rothko, Still and Newman, it is not at all a synthesis and is thoroughly independent.”9 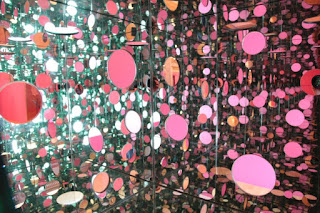 In 1973, Kusama returned to Japan after persistent troubles with her mental health and crippling financial difficulties. Despite voluntarily living in an insane asylum since 1977, Kusama has continued to produce innovative and meaningful pieces of art through which she shares her unique life experiences. Her later work has become characterized by installation pieces and the widespread use of polka dots. In many ways, the installation art of Kusama represents an expansion of her Infinity Nets into larger, three-dimensional objects. “The Passing Winter” (2005) consists of a room walled with mirrors and covered in polka dots. The effect of the mirrors makes the room look infinite, which served as a major theme of Kusama’s art and as a justification for her extensive use of polka dots. According to Kusama, “a polka-dot has the form of the sun, which is a symbol of the energy of the whole world and our living life, and also the form of the moon, which is calm. Round, soft, colorful, senseless and unknowing. Polka-dots become movement ... Polka dots are a way to infinity.”10  The concept of infinity in the works of Kusama ties back to her experiences with hallucinations. The artist’s depiction of this idea of infinity, whether on a canvas or in a small room, allows the viewer to glance into the seemingly infinite corridors of Kusama’s psyche.

“The Passing Winter” was completed over 50 years after Kusama’s “A Flower” and the stylistic progression is more than apparent. The use of vibrant and psychedelic colors in “The Passing Winter” marks a complete transition from the more conservative use of colors in Kusama’s Nihonga-influenced works. Additionally, Kusama’s use of polka dots touches upon certain aspects of feminism, as she often used polka dots in a provocative or sexually suggestive way on the nude female body. While we do not necessarily see this in “The Passing Winter,” it was a significant aspect of many of Kusama’s works involving the use of polka dots. It is also important to note that Kusama's works, especially those involving polka dots, influenced the Pop Art movement and artists like Andy Warhol and Roy Lichtenstein. One very important characteristic of Pop Art is irony, and Kusama's use of polka dots encompasses this. Bright colored polka dots give off the impression of playfulness and even childlike innocence. However, Kusama's works convey a much more disturbing message.

Looking at the progression of Kusama's works, we observe a conspicuous shift in her stylistic influences. While her early works were characterized by the traditional Japanese Nihonga style, her later pieces encompass the characteristics of abstract impressionism, minimalism, and even feminism, more common to Western art. Notwithstanding her stylistic diversity, one common theme has always defined Kusama's works: the impact of her hallucinations and the use of art to combat her adverse psychological conditions. The influence of the artist's hallucinations is apparent in all three works presented here, as well as in many others completed throughout Kusama's illustrious career.