February 12, 1925.  Joan Mitchell was born in Chicago, Illinois. From a very young age, she began taking art classes. She was very much influenced by her mother's work as a coeditor of Poetry magazine and the authors who would come to visit.

1942–44. So, Mitchell first considered a career in writing, and she studied English literature at Smith College.

1944–47, 1950. Soon after, Mitchell decided to become a professional painter instead and received her B.F.A. and M.F.A. degrees from the School of the Art Institute of Chicago. Afterwards, Mitchell moved to New York to begin exhibiting her work. She received considerable acclaim for her work in abstract expressionism, and in fact was one of the few women and most important members of the second generation of American Abstract Expressionists. This sketch is from a sketchbook that Mitchell kept in 1948, while she lived in Brooklyn with her future (and brief) husband Barney Rosset. The sketchbook measures 10 1/8 x 7 7/8 inches, and it primarily consists of drawings in graphite, although it includes text and small gouache paintings. This sketchbook represents Mitchell's early experimentation with cubist abstraction. Sketches of Rosset and their cat, Gluton, also show the love Mitchell had for her subjects. Drawings of the Brooklyn Bridge and other urban landscapes reflected her deliberate study of how to transform and abstract the visible world. Finally, this sketchbook contains French vocabulary words in Mitchell's handwriting, most likely in preparation for her trip to France (on a traveling fellowship) later that year. 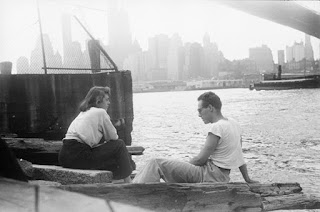 1959. Mitchell moved to Paris, which is where most of her career took place, despite her success as a member of the New York School. Mitchell began painting in a studio on the rue Fremicourt, in the 15th arrondissement of Paris.

1960-64. Mitchell went through a sombre stylistic period during this time, using dark hues and central masses of color in primordial expressions. Mitchell herself referred to the work she created in this period as "very violent and angry", and she wanted her paintings to "convey the feeling of the dying sunflower". By 1964 Mitchell was moving on from her violent phase. 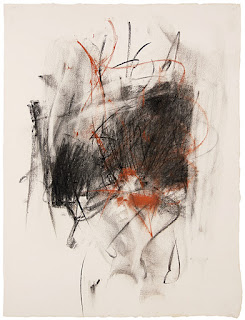 Joan Mitchell said that by 1964, she was "trying to get out of a violent phase and into something else." This "something else" was a series of somber paintings she created in 1964,works that she called "my black paintings- although there's no black in any of them." These works are a break from the intensely colored, energetic, allover style of her earlier production, marking the end to the self-styled "violent" phase of her work. These small, bold works were made on sketchbook sheets using charcoal covered with watercolor or oil. Some of the larger charcoal drawings have bits of sepia pastel, as this image shows.

1967. Following her angry period, Mitchell bought a property in Vétheuil, France. This move greatly impacted her work- for the first time in her career, Mitchell had a large studio separate from her home. Vétheuil was a small town, an hour northwest of Paris, and her home was surrounded by gardens and trees, and overlooked the Seine.

This monumentally sized, four panel painting is reflective of the space Mitchell had to paint in her home in Vétheuil. Mitchell took a physically and mentally rigorous approach to painting. Here, you can see the arc of her brushstrokes , especially at the top where she had to extend her reach. Although her paintings were built slowly and carefully, Mitchell would stand back and look at a black canvas for long periods of time, decide where each mark should go, then approach to paint quickly and confidently. In paneled works like this, the panels repeat and mirror the structure of the others. You can also see here how Mitchell synthesized contrasting concepts such as light and dark, and space and density.

1983-84. During this period, Mitchell created a monumental suite of twenty-one paintings, collectively titled La Grande Vallée. The name was inspired by a story told to Mitchell by her close friend Gisele Barreau, who grew up in Brittany, France. The collection represents a group of related images that closely resemble one another in content and palette. They aim to convey an idyllic vision of the joy and innocence of youth, perhaps suggesting childhood's fleeting intimations of eternal paradise. From the early 80's on, Mitchell's health began to fail. She felt constantly surrounded by death (her sister, Gisele), so that painting became a necessity for her, and it fed her hunger to live. "Painting is the opposite of death, it permits one to survive, it also permits one to live." 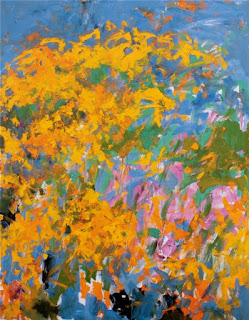 Many of the Grande Vallee canvases, like this one, appear to represent vast field of flowers. Mitchell almost completely abandoned the figure ground relationship, and she filled the entire surface of the picture with short, lambent brush strokes. In this canvas specifically, this produced the effect of yellow, orange, and pink petals that flutter and sway. Sun seems to light up the field and saturate the color of the grass. This painting also represents Mitchell's most sustained exploration of the "allover" approach, in which, unlike her previous works, the entire canvas is covered with color from edge to edge.

La Grande Vallée was a turning point in Mitchell's career. It separated her earlier work (mostly singular paintings with centralized motifs on sparer canvases) from her later work, which were more intensely worked groups of canvases. This collection represented Mitchell at her technical best. Even after completing La Grande Vallée, Mitchell continued to develop her calligraphic and energetic brushwork. But, as many have noted, none of her other works were able to match the "richly inventive chromatic sensation, the life-embracing passion, and the poetic lyricism of La Grande Vallée.

Later Years and Death (1992). As previously mentioned, Mitchell's health began to decay in the early 80's. First in 1984, she was diagnosed with advanced oral cancer. Therapy was successful, but left her with a dead jawbone, anxiety, and depression. She had to quit smoking on doctor's orders, but she remained a heavy drinker. During this time, Mitchell's work changed significantly. Her post-cancer paintings reflect the psychological changes she experienced, and in her final years she refocused on the subject of dying sunflowers. Mitchell then developed osteoarthritis from hip dysplasia and went under surgery with little success. Because of her post-operative complications, she began watercolor painting because she was required to work in a smaller format, and on an easel. In October of 1992, Mitchell flew to New York for a Matisse exhibition, who she had admired greatly for years. Upon arrival, she was taken to a doctor and diagnosed with advanced lung cancer. Mitchell flew back to Paris on October 22, and entered a hospital in Paris. Eight days later, on the morning of October 30, 1992, Joan Mitchell died at the American Hospital of Paris.

I chose to write about Joan Mitchell, because she was a wonderfully inspiring and empowering artist. Mitchell was one of her era's few female painters to gain critical and public acclaim, and in 2014, one of her painting auctions even broke the record at the time. I liked that Joan Mitchell had a life full of travel and adventure, and her move to Paris gave her a sort of romantic and mysterious expatriate appeal. As for her work itself, I personally have never understood abstract art, so I thought I could learn something of value from her abstract expressionism. Also, the fact that Mitchell did not use pure abstraction, but highly stylized representations of landscapes, was intriguing and different.

http://joanmitchellfoundation.org/
Posted by Unknown at 9:03 PM