Nicolas Poussin, (June 1594-November 1665), was the leading painter of the classical French Baroque style, though he spent most his life in Rome. His works first drew my attention when I went to the Louvre in Paris last summer.  In this blog post, I want to examine and analyze a few of his works that left me with deep impression. 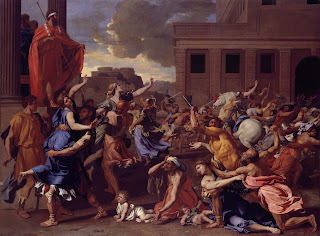 The Abduction of the Sabine Women

Nicolas Poussin’s The Abduction of the Sabine Women, painted around 1633­ to 1634, is an illustration of an episode in the legendary history of Rome of how the first generation of Roman, shortly after its founding by Romulus and his male followers, forcibly abducted wives from the neighboring Sabine family for themselves.

In the painting, Poussin designed the action which takes place in a large square in ancient Rome. He arranged the complex battle stage in a grand and majestic landscape. The image is in a rich and bright color tone which indicates the festive atmosphere the invited neighboring people expected to have. Romulus is dressed in a bright red tunic and mantle with a ribbon tied around his head, waving one end of the fabric, standing aloof of the games and is depicted as an innate leader. He stands and gazes at the battle calmly with prophetic confidence. He is surrounded by two of his chief man and holds out his cloak, surveying the violent abduction event that triggered deliberately. Romulus officiates from a temple, therefore it would be logical to think that he is capable to be pontifex maximums (Costello, 202).


Many viewers interpret the painting in a benign spirit, as a neoplatonic allegory of marriage. The rape of the Sabine women had been one of the most common theme in Renaissance and PostRenaissance work of arts. It combined the inspiring hardihood and courage of ancient Romans. The depiction of multiple figures, including the heroic seminude figures, intensified the passionate struggle and dominating power of ancient Romans. 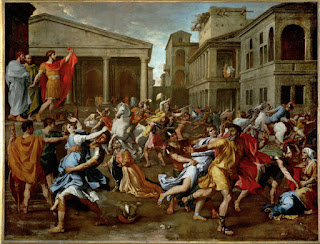 The Rape of Sabine Women

In Contrast, in The Rape of Sabine Women, Poussin painted in a sensual and dramatic style rich in color. He adapted the conventions of classical art by emphasizing moral content and paying attention to the expressive quality of picture. Poussin was fascinated by the beauty and grandeur of classical antiquity and the heroic events in Roman history. In this picture, Poussin bring us a complex but carefully organized and tightly structured narrative scene.

His depiction of the majestic landscape in the back and sophisticated figures relations presents a heroic atmosphere. The abduction movement is toned down by actions and gestures expressive of affetti which is the expression of emotions (Forte, 553). The facial expression motion reproduces the climax scene of the abduction. Poussin’s Sabine Women combined the influence of Tuscany origination with impressions of the classical antiquities in Rome (Costello, 200). It illustrates the notion of concetti, or proper historical prototypes for a particular figure, understood as a complex poetic conceit (Forte, 553).

From these two works, we can see his in-depth interpretation of the historical events in ancient Rome. As a successful painter, Poussin served his early patrons including members of the circle of Pope Urban VIII, the librarian of the Barberini Collection and extensive French clientele, including bourgeois and court figures (Forte, 543). In Rome from 1643, he reasserted himself as French national prestige, commenting negatively in order to undermine his political allies. He encouraged young artists to follow him to establish an “austere Neo­Greek style”. Poussin kept lively dialogue with French patrons, artists,critics and government officials. He tried to balance the internal logics with the patron’s desire. Forte described his relationship with the patrons in a “disputatious, yet deferential, but not submissive social order” (Forte). During this period, he developed some innovative expressions for his patrons, as we can see from the Bacchanal below--it contains a lot of sexual implications even though it is about a festival. And this unique expression makes him one of the best painters of his era. 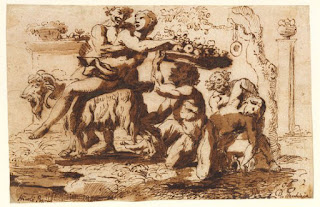 Through these three works, we can see the social and political allegiances and the "heroic" absolutist subject that give visible expression to the intertwined values and aspiration of his patrons, the public and the artist himself.