Robert Kuhn (1920-2007) was born in Buffalo, New York to a household that placed no particular emphasis on the arts. However, his father, Edward, was known to “retouch” any paintings or artwork that he did acquire. That is to say, he would change and perhaps improve upon paintings that he might hang on the walls of his house. This practice of touching up and redoing art became a common practice for Bob as he would constantly revisit his artwork years after its completion. During Kuhn’s childhood a recent boom in illustrations in newspapers and periodicals was blossoming and greatly influenced Kuhn’s desire to become a painter and illustrator. While he browsed magazines and paper from a young age admiring the illustrations, his primary interest was in wildlife. He eventually enrolled in the Pratt Institute in Brooklyn where he studied commercial illustration. Starting in 1940, he began a career as a freelance commercial illustrator for a number of years working for magazines such as Reader’s Digest, Outdoor Life, and Field and Dream. He never was a big fan of painting humans as it usually required hiring a model, dressing them, photographing them, and drawing from a photograph. As a commercial illustrator though, Kuhn was required to create art in the style that the art director of the magazine wished. Below is an example of  one of Kuhn’s covers for Argosy:

In the early 1950s, Kuhn began work fulltime with Field and Stream, which allowed him opportunities to travel to Alaska and Africa to do draw and paint more wildlife assignments such as the sketch below, which depicts a dead elephant that he saw during his travels to Africa in 1956:
Kuhn loved his explorations in Africa with the editor of Field and Stream because he had no official assignment meaning he did not have an art director telling him what to paint and how to paint. He was able to sketch and paint anything and everything he wanted in any style that he wished. This sense of freeness eventually led to Kuhn deciding to quit commercial illustration in 1970. He was then hired by Remington Rifles to create calendar art to promote their rifles. Kuhn notes that during this time he really began to explore the qualities of paint and was required to come up with illustrations from his imagination. He loved the sense of having a blank canvass without a preconceived notion of what his art had to look like. During this time he honed his skills in a realist fashion exploring different colors and textures. Below is an example of work he did for the calendar in 1970.

After his stint with Remington, Kuhn quit illustration all together and dedicated his life to painting wildlife until the end of he passed in 2007. During these years he took many safaris in Africa making quick study sketches and taking photographs along the way and would complete his paintings in his studio back in America. An example of one of his easel paintings is shown below.
I chose to learn more about Robert Kuhn after reading an essay he wrote titled “Drawing-A point of Departure,” in which he explains his views of drawing wildlife. I appreciate his idea that drawings are not meant to be “preliminary to anything,” rather when you draw outside “what you see is going directly from your eye to your hand.” He believes that the mind works as a way to interpret the subject when you draw empirically. Further, he thinks that photographs “lie” in a certain sense. That they do not really show exactly what the eye sees thus drawing in real time in real life gives you a truer sense of the subject and how your own brain creatively interprets it. Below are a few of sketches of wildlife by Bob Kuhn primarily done with graphite or Conté on paper. 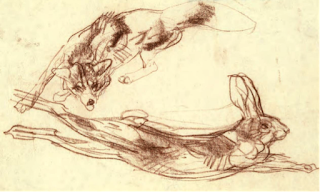 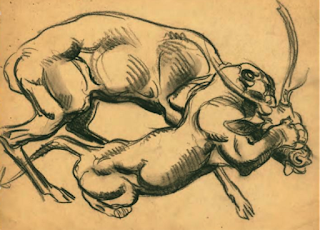