Coming from a fairly suburban hometown, architecture in my mind resembles the big box stores that continue to provide for my family and community. I am fond of these stores in the way that a caterpillar knows its cocoon; they are intrinsically tied to my personal history, but I’ve grown tired of them. Nonetheless, one architectural conversation changed my perspective on big box stores and helped me to find some life in the design. For my research blog post, I selected the art and design firm SITE (Sculpture In The Environment) and its principal sculptor James Wines. SITE’s work began in 1969; however, for the clarity of this blog post, I’ll focus on their work for the BEST company in the 1980s. BEST is no longer extant, so it’s helpful think of it as a less popular Wal-Mart. SITE received a commission to design the facades of the BEST stores in the 1970s (SITE 9).

The designs for the new BEST stores embodied “pop” art, a style of art and architecture that was accessible but critical of that which it is embracing (e.g. the elite, markets, etc.). SITE’s designs, those realized and those remaining in sketches, deconstructed the notion of an ordinary big box store with amusement and wit.

The above sketch of the Best Forest Building emphasizes how far the members of SITE were willing to stretch their creative freedom. The upper right image showcases the perspective of the building from its seemingly vast parking lot. The arcs of the parking lot lines add to the depth of the mid-ground of the scene. In a simple pen and ink rendering, SITE brought to life a forest-programmed as a BEST store. James Wines' book De-Architecture illustrates the rationale behind this form of ornamentation as Wines states, "[the most relevant part of building is] the formal relationships it absorbs from the outside" (Wines 33). The forest “penetrates and envelops the showroom,” creating a juxtaposition of postmodern commercialism and its simultaneous regression into nature (SITE 110). 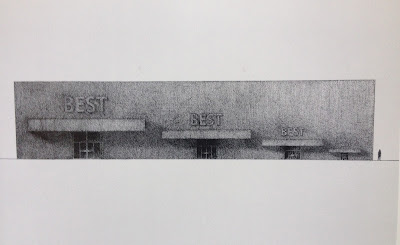 SITE based their conceptual engagement with their general-store sponsor on sketches of basic transformations of the BEST stores. The second image "Scale Reference Project" modifies the scale of the front entrance and sign, manipulating the meaning of the building to an average-sized viewer. The sketch relies of the density of pen marks and different line weights to create minute shadows and to angle the building. This sketch rethinks the basic but essential elements of a big box store. 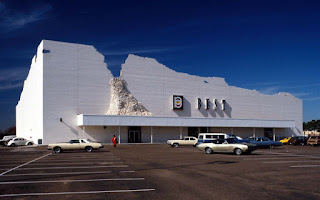 Ultimately, the Lewis family and BEST approved the SITE designs and began to develop an iconic series of fragmented and modified buildings. It would take way from SITE’s work to not include an image of at least one of their physical BEST buildings. The Best Indeterminate Façade Showroom in Houston plays with the stability of this iconic building type by reducing the perfect form of the big box to rubble. It emulates a process of decay and even has an additional showroom of white, “ghost” commodities sculpted into its façade. Although it could be a marketing gimmick, the store portrays an obvious commentary on what was post-war optimism and an ever-growing commercialism.

The BEST and SITE collaboration inspires me to rethink the context of the objects and institutions I often deal with. In simple pen and ink, these sketches allowed SITE to dream up their commentary on American commercialism. The collection of modified stores may have been replaced or renovated by now, but these sketches and images showcase a time where it was novel to link art and architecture in a manner so public. For a more in-depth look at the fate of the BEST x SITE stores, check out this link.