I chose to focus this assignment on Johannes Vermeer, a prominent oil painter of the mid 17th century. Creating only 36 known works of art in his short lifetime, Vermeer’s paintings are some of the world’s most valued. Vermeer focused his work on figures and landscapes, each remarkably realistic in their color and lighting. His hometown of Delft, Netherlands provided the setting for numerous paintings where he brought life to typically ordinary scenes. Vermeer’s innovative techniques and talent make him a revolutionary of the baroque art era. Unfortunately like many artists, Vermeer’s art was not appreciated in his lifetime leading to large financial struggles toward the end of his life.

Vermeer is rightfully considered a master of chiaroscuro, creating impeccably realistic depictions of light and shadow. It is believed that the painter utilized the camera obscura to help visualize shadows and images. This box contains mirrors and lenses that project the scene and intensify light and shadow. Also impressive is Vermeer’s use of color, especially considering the limitations of pigments and tools available at the time. The artist frequently used an abundant amount of paint, favoring the expensive and rare ultramarine. This ultramarine paint was used not only to color objects and fabric, but also as an undercoat to improve the surface of the painting and his techniques. After completing the painting, Vermeer would cover them in a glaze for protection and added shine. Art historians report that another interesting technique of Vermeer included using his brush handle tip as an eraser to change areas of his paintings. By erasing a layer of paint, Vermeer could enhance light reflections and add a sense of depth to the image. 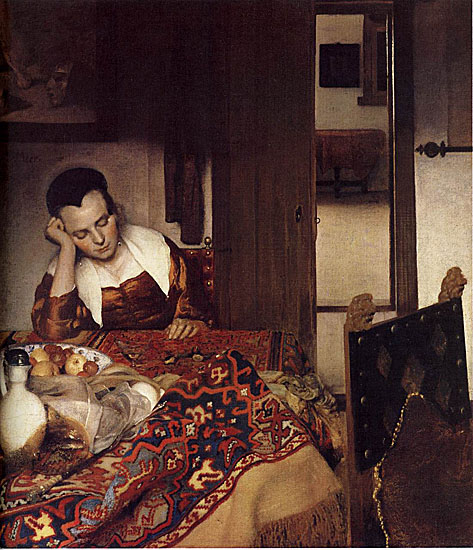 This was the first Vermeer painting I saw in person, located in the Metropolitan Museum of Art. I remember being immediately drawn into the realistic folding and shadowing of the rug on the table. Also notable was light reflecting off the fabric of the woman’s dress. An interesting fact I found about this painting was that originally Vermeer painted a man and a dog in the background of the lower right (found using radiography). Deleting this aspect of the scene forces the viewer to create his/her own interpretation of the woman’s dreamy smile. This is personally one of my favorite Vermeer paintings currently also located in the Metropolitan Museum of Art. According to Nash, this painting is done in Vermeer’s “mature style” using a technique of “globular dots of liquid light.” The paint was applied in diverse but coherent strokes and glazes. Again, Vermeer masters chiaroscuro with light pouring across the objects horizontally from the window. This painting also exemplifies the ultramarine used for darker hues in the dress, window, and map.

I found the orientation of this image particularly captivating. The three main elements of the window, map, and pitcher create a triangular composition that places the woman at the center, making her the focus of the image. The woman is believed to be either Vermeer’s wife, Catherine or his oldest daughter (of 11 children), Maria. The map of the Netherlands in the background may allude to Vermeer’s Dutch pride. The basin and water pitcher are representative of purity, echoing off the woman’s gentile smile toward the light. In fact, the woman is so much a part of the pitcher that the line of the spout seamlessly transitions into the line of her sleeve. Similar to “A Woman Asleep,” Vermeer initially had a chair in the lower left of the painting, which he later erased and painted over.

This particular painting is thought to have been of great importance to Vermeer, as he never sold the work, even through financially difficult times. Rather than depicting an ordinary scene of daily life, this painting seems to be more about the meaning and significance of painting to Vermeer. This was a very unique subject to paint about in Vermeer’s era, demonstrating his creativity. The painting shows the artist drawing his model of a little girl dressed as Clio, the muse of history.

Again, there is spectacular detail of the chandelier, map, and fabric. The light and shadows seem to perfectly fall across the clothing and slightly wrinkled map. Vermeer also did a remarkable job in drawing the texture of different objects and fabrics. I feel as though I can reach in and touch everything in the image. I also appreciated the perspective of this painting, as the viewer peers beyond the curtain into the small room at the back of the painter.


I have been fortunate to grow up with parents who took me to multiple art museums throughout my life. Their love for art has undoubtedly influenced my continued appreciation and passion. I chose to do this assignment on Vermeer because seeing his works in museums has always had a strong impact on me. My favorite art to view has always been paintings with a photographic element to them. I am impressed with works that leave me feeling like I could reach into them and touch the figures inside. Vermeer was revolutionary in his ability to portray the dimensions of objects with their intricate folding and shadows. He is truly a master at playing with a light source and accurately depicting the way it bounces off of objects to bring them to life. Personally, I was always most blown away by his ability to paint the patterned rugs and curtains that appear in many of his works. After having completed the shading assignment, I can now even better appreciate how difficult this is to accomplish.

I also love how Vermeer’s pictures can take a seemingly ordinary scene from daily life and give the viewer so much to appreciate and interpret. When taking in a picture, I find my mind wandering to create a narrative that explains what I see. It is unfortunate that Vermeer died at 43 with only 36 known works, but his inspirational talent and influence on the art world remains remarkable.