Antoni Tàpies was born in Barcelona, Spain in 1923. His father and maternal grandfather were intensely political and associated with Catalan republicanism. He first encountered contemporary art through various magazines and publications, most importantly the Christmas issue of D’ací i d’allà, which included prints of Picasso, Braque, Gris, and Miró, among others. He lived through the Spanish Civil War from 1936-1939 and the resulting Francisco Franco dictatorship. These experiences would deeply impact his future works.


From 1942-1943 Tàpies suffered a prolonged bout with lung disease during which he became more seriously devoted to drawing, often copying works by Picasso and Van Gogh. He discovers the writings of philosophical greats such as Mann and Nietzsche. After recovering, Tàpies pursues a law degree, only to drop out shortly before completion to study art at Academia Valls. There, poet and art critic Josep Maria Junoy influences him to devote his life to art. After co-founding the surrealist magazine Dau al Set in 1948, Tàpies explored the use of iconographic and magical subjects, inspired by the work of Miró and Klee. He begins introducing textured canvases and geometric objects into this paintings, elements that have come to be known as characteristic of Tàpies.


Tàpies is best known for his commitment to Matter Painting, a genre of Abstract Expressionism, which was a popular post-World War II style of painting championed by famous artists such as Pollock and Rothko. Matter Painting used nontraditional mediums such as glue, dust, and string to create rich and unexpected texture on the canvas. In White and Orange (1967), Tàpies creates a white wall on the canvas, punctuating it with a semi-symmetrical design. This texture and abstract image are typical of the style of Matter Painting. 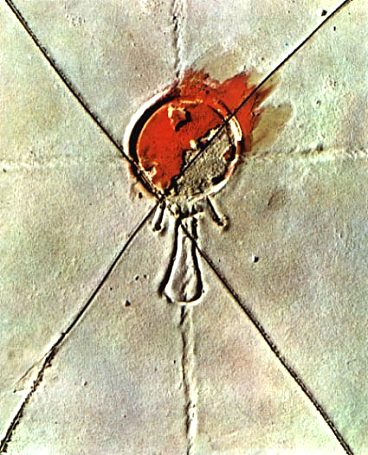 Many paintings of Tàpies portray walls. Tàpies regarded the wall as his alter ego; in Catalan “tàpia” means wall. Tàpies strove to “break with the dualism characteristic of our society and merge with matter in a formless continuum,” as is evidenced by his work Black Form on Grey Square (1960) (Fundació Tàpies). In this painting, Tàpies has created a grey wall, inhibiting the viewer from seeing beyond the canvas. However, the painting also shows the cracks that form in the wall as time passes, hinting at its evolution and degradation over time. 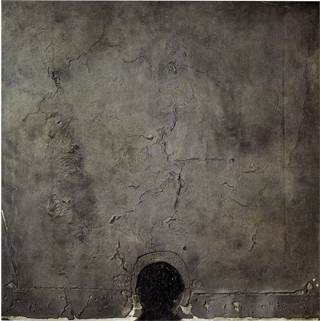 Tàpies often painted about political subjects, especially relating to the political situation in Spain. From 1939 until his death in 1975, Franco ruled Spain as a fascist dictator. In 1974 Tàpies produced his Series of Monotypes, which refers to the quality of life under Franco’s dictatorship. They evoke images of walls strewn with anti-government graffiti. In addition, some feature horizontal and vertical lines, suggesting prison bars or the stones of the wall he has created. 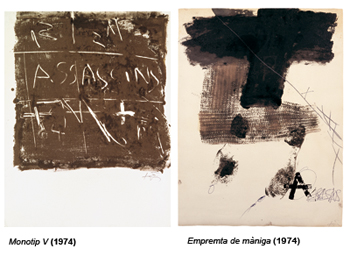 In this work created in 1946-1947 titled Newsprint Cross, Tàpies expresses Europe’s post-war grief employing a Symbolist perspective. Tàpies used scraps from the obituary section of the newspaper to create the cross, which, from a Symbolist perspective, “represents the synthesis of everything material (horizontal) and spiritual (vertical), as well as its transcendence” (Fundació Tàpies). The cross appears to be sitting in a field, like a grave marker, as evoked by the grass-like strokes across the bottom of the canvass. 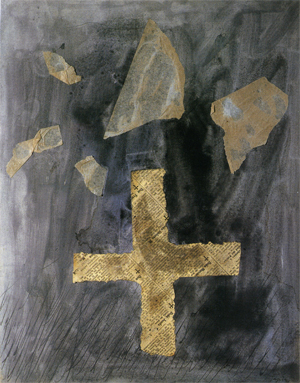 Tàpies’ innovative and distinctive use of symbols, shapes, and diverse medium defines his Matter Painting style that wowed the world and continues to garner much respect and appreciation today. Tàpies achieved international acclaim in the mid-1950s and his work has been shown in many of the world’s top museums including the Museum of Modern Art in New York City, the Centre Pompidou in Paris, and the Museo Nacional Centro de Arte Reina Sofía in Madrid. In 1984 Tàpies founded the Fundació Tàpies in order to promote “the study and knowledge of contemporary art, paying special attention to art’s role in forming the conscience of modern man” (Fundació Tàpies).